5 things to know about the breakout trail-running star 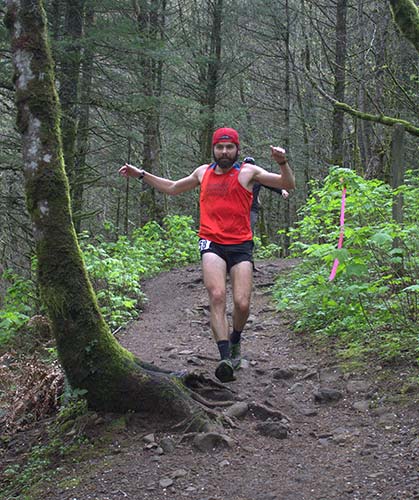 DeNucci at the Gorge Waterfalls 100K. Photo by Luke Tamagna-Darr

A lot of people watching asked, justifiably, “Who?”

We’re glad you asked. Here’s what you should know about one of trail running’s newest rising stars.

A lot of people had the same reaction when Matt Laye, now 34, won the Rocky Raccoon 100-miler in February 2014, beating course-record holder Ian Sharman, among others.

Like Laye, who resides in Oakland, California, DeNucci (pronounced da-NOOCH-ee) is part of the fast-growing and star-studded Bay Area trail community. He says training alongside athletes like Alex Varner (third at The North Face [TNF] 50 San Francisco and seventh at WS100 in 2014), Dylan Bowman (fifth at TNF 50 and third at WS100 in 2014), Brett Rivers (ninth at WS100 in 2014) and Jorge Maravilla (seventh at TNF 50 in 2014 and second at New Zealand’s Tarawera 100K in February) has helped kick his own running into high gear.

“Running regularly with guys who finish in the top ten at big races really alters your perspective on what you can do,” says DeNucci. “You start out just trying to keep up with them, and if you’re able to, you can really pull from that and improve. We run hard and we push each other.”

2. His brain matches his brawn

DeNucci first moved to California to begin his residency in radiology at Stanford University; prior to that, he simultaneously completed medical school and a Ph.D. in immunology at the University of Minnesota.

His work focuses on musculoskeletal imaging. “MRIs, stuff like that,” he says. “I’m mostly looking at knees, shoulders and hips.”

At the moment, he says, he hopes to make a career out of sports medicine. “I’d like to get a fellowship in the Bay Area doing sports imaging,” he says. “Stanford has a really good connection with the 49ers, among other places, so that could be something I look at.”

3. His schedule is nuts – and he uses that to mold his training

Unsurprisingly, doing a medical residency at Stanford will keep you busy.

As I talked with him, he was about to start his first-ever set of night calls – a week of six straight overnight shifts, which will happen once a month.

“My schedule definitely limits the amount of training I can do, and I’m completely limited to the free time I have,” he says. But, he adds, “That’s the same for everyone, isn’t it?”

He says the limited free time has probably helped keep him from overtraining or getting injured – always a risk when your hometown boasts perfect running weather year-round and a slew of fast training partners. It also means he can’t stick to a too-rigid training plan; he gets out when he can, even if that’s the middle of the night. “I’ve done long runs into midnight,” he says. “It’s certainly easier to do that here with the weather than in Minnesota.”

Once he’s out on a run, he says, if he feels good, that day will be a hard effort. If he doesn’t, the workout will have to wait. His workouts are more free-form than the highly-structured intervals he would use when he was training for marathons in years past; these days, they usually consist of a progression run where he runs harder and harder over several miles, or focuses on running hard downhills to strengthen his legs.

“I do a lot of my runs with Mario Fraioli, who’s a coach, so I’ll run a lot of things by him,” says DeNucci. “I go hard when I can, and I really use my non-running time, even the time at work, to recover.”

He also uses his time at work to practice power hiking, by taking the stairs.

4. He does most of his running on the road

Like most of the Bay Area, Menlo Park sits near some world-class trails with massive climbs. But DeNucci’s habit of running in the dark before or after long shifts made the roads a more attractive option.

“The beauty of living out here, though, is that even the roads get you a lot of vert,” he says. “On a 10- to 20-mile run, you can get 500 to 2,000 feet of climbing and descending. That’s definitely helped me improve since moving out here.”

5. He knew he could finish top-two at Gorge

Since there were two WS100 spots on the line, the Gorge Waterfalls 100K attracted plenty of fast runners – many of them sponsored by major shoe brands – who all boasted the same kind of top finishes as many of DeNucci’s training partners.

He says this didn’t faze him – he had a race plan, and stuck to it.

“Internally, I knew I was very fit, and knew I had a chance [to finish in the top two], but I wanted to keep the mindset that I was running my own race,” he says. “Some of the top ultrarunners in the nation were there, and just because I want to win and have a certain level of fitness doesn’t mean I’ll be able to match someone else who has a great day of their own.”

As the early stages of the race unfolded along technical, rocky ridges before dawn, DeNucci realized all that running in the dark might be working to his advantage. By the time the sun came up, he was with the lead pack – where he would remain, even through a wrong turn and a detour – until eventual winner Justin Houck, 29, of Mercer Island, Washington, broke away at mile 40.

He would finish in 9:49:18 – over 26 minutes behind Houck, but ten minutes ahead of third-place Benjamin Stern. The first thing he did was text his training partner Fraioli, “Looks like u will be pacing at states!”