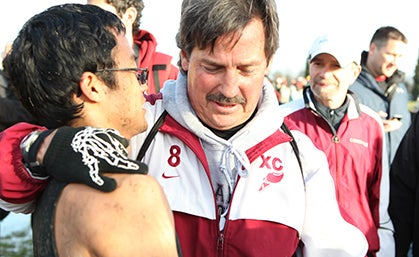 The year was 1989, and the fourth running of the Angeles Crest 100-Mile Endurance Run would take place in late summer in the rugged San Gabriel Mountains near Wrightwood, California. (Back then, there were six total 100-milers in North America; now? … 110 plus!) After surviving a rigorous training regimen that topped out at 200 miles per week, a budding ultrarunner Jim O’Brien, then 36, would set a course record of 17:35:48. (O’Brien would go on to win the Leadville 100 in 1990 and the Wasatch 100 in 1991.)

Now, nearly 25 years later, his Angeles Crest course record still stands, even though the course was shortened by about two miles in 1992. O’Brien was, no doubt, a trail ultrarunning pioneer.

O’Brien, however, has left an even stronger mark in the realm of coaching, which he began at the college level at University of San Diego from 1982 to 1984 then Cal Tech in the mid-1980s through mid-’90s. In the SoCal area, he has mentored everyone from speedy road 10Kers to trail 100-milers, started a private coaching gig with an assortment of clients known as Team Blarney and for the past 17 years, has coached the Arcadia High School boys’ cross-country team, taking them to a phenomenal two state and two national titles (2010 and 2012). Indeed, the Arcadia program is one of the most successful in the country, and the charismatic O’Brien is credited with getting the most out of his athletes.

“Jimmy is the least bullshit coach I’ve ever met,” says Larry Gassan, 57, of Los Angeles, whom O’Brien coached from 1992 to 2002. “The most significant experience of my running career is when he paced me for the last 25 miles at the 1996 Angeles Crest 100. I got schooled that night, and felt I was in the presence of more knowledge than I’d ever dreamed of.”

But on June 17, 2013, O’Brien, now 60, was abruptly fired from his head coaching position at Arcadia. Runners, students, alumni and parents were shocked. O’Brien was not apparently involved in any scandal and, though his style has been described as intense, had no real detractors, other than the personnel associated at Arcadia High School associated with his firing.

“This is totally unwarranted, and I can’t understand why [school officials] don’t respect what we’ve built here and what’s best for the kids,” says O’Brien. “For sure, there was a communication breakdown of sorts, but professionals should be able to sit down and work together, despite our differences. It looks like [my firing] is a personal vendetta.”

According to O’Brien (see interview in YouTube video link below), the initial reason school Principal Brent Forsee gave for the firing was that the school wanted “to go in another direction.”

Also, Superintendent Joel Shawn alleged that O’Brien vandalized school lockers by spray painting X’s on them. O’Brien says he painted the X’s on lockers that were broken, to help protect his student athletes from having their belongings stolen, as well as to protect the school from lawsuits relating to any potential thefts.

At a June 24 meeting between O’Brien supporters and Shawn (see YouTube video), Shawn dodged direct questioning by parents, students, alumni and athletes as to the real reason(s) for O’Brien’s firing. Despite O’Brien’s coaching success, the overwhelming sentiment of his athletes has nothing to do with titles. Rather, they praise O’Brien’s unwavering support of all his runners (many of whom are misfits from other sports programs at the school), not just the top-level ones. As well, many students and athletes credit O’Brien with helping them turn their lives around amid difficult personal situations.

On July 23, around 500 supporters packed the Arcadia High School Performing Arts Center for the Arcadia Unified School District Board of Education meeting to protest O’Brien’s firing and request his reinstatement. Over nearly four hours, around 50 speakers reportedly gave emotional, impassioned testimonials regarding O’Brien’s coaching skills, character and positive influence on many students’ and athletes’ lives. No speaker supported O’Brien’s firing. 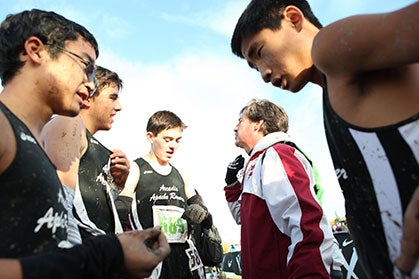 “A single mother said O’Brien was a father figure in her sons’ lives. Another parent said O’Brien called her to see if she would take a student in who was having a difficult home life. A former student said he lost the use of his legs during a snowboarding accident in college and O’Brien came to his bedside and inspired him to compete in the wheelchair race at the L.A. Marathon.”

One student, who said she once attempted suicide, said O’Brien saved her.

‘This man has taught me hope, taught me courage and taught me perseverance,’ she said. ‘What you have taught me saves my life every day.’”

When contacted regarding the issue, Superintendent Joel Shawn responded: “Because of the personnel and privacy issues involved, I am unable to answer your questions. Any change to the current decision will be made prior to the beginning of the school year, which is August 27.”

So, what really gives here? The reasons school officials gave for O’Brien’s firing appear superficial, and deeper personal conflicts are likely responsible. O’Brien admits to being “painfully honest, even blunt” but says none of his actions warrant such harsh action. He cites a few conflicts over the past few years for contributing to strained relations, particularly between himself and head track coach, Chris Schultz. But O’Brien has made it clear to officials that he is willing to follow whatever protocols may be necessary to continue as the Arcadia High School coach, “to do what’s best for the kids.”

He even offered his services as assistant coach to the newly named head coach, Michael Feraco, O’Brien’s previous assistant coach (whom O’Brien says implored Shawn to reinstate him) with about six years’ experience, but was denied. Officials went so far as to say he is to have no contact with the cross-country team members. He offered other conciliatory options to Shawn, but all were rejected.

Now, O’Brien is standing his ground, saying, “I want the whole enchilada back, and want to take the kids to the national championships meet again and see what we can do.”

Along with other issues over the past few years, O’Brien says one thing that rankled officials is his outside USATF summer team that includes over 100 athletes and the kids have dubbed “O’Brien’s Army.”

The genesis for starting the camp, says O’Brien, relates to a new school policy that requires athletes to train only on Arcadia school property for the summer-school sport camp, which would relegate them to the track. “It is simply inadequate and not a workable way to train cross-country athletes,” says O’Brien. So he says he respectfully declined to work for the school program and began the club to give the kids the best opportunity to be successful. Each August, O’Brien takes around 40 team members for a high-altitude training camp—where they run almost exclusively on trails—in Mammoth, California … which is where he will be this summer when the school board reaches its final decision.

View this YouTube video to better understand O’Brien’s impact on his students and athletes and his current situation.

Here is the Keep Coach O Brien at Arcadia Facebook page started by his supporters; it has garnered over 4000 Likes.