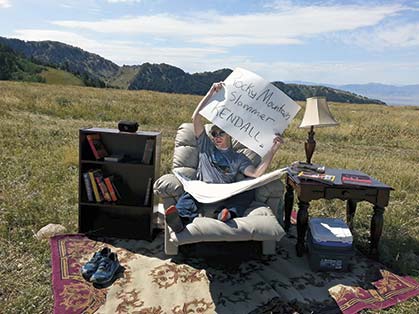 Matt Van Horn’s home away from home at the Wasatch Front 100. Photo by Kendall Wimmer.

When Utah ultrarunner Matt Van Horn, 43, learned that he would not be able to run the 2014 Wasatch Front 100 Mile Endurance Run due to a knee injury, he could have wallowed in self-pity.

That, however, was not Van Horn’s style.

He had many friends planning to run Wasatch, whom he still wanted to support, so he did what any good friend would do: he brought his living room—complete with La-Z-Boy recliner, end table, lamp, bookshelf, cooler and a large rectangular rug—and set up a makeshift cheering station along the race course. He made individual posters with racers’ names to encourage them along the way, moving camp three times and spending a total of 27 hours cheering on the runners.

“I didn’t want them to stop, but I wanted them to have some distraction from their tired bodies and minds,” says Van Horn.

He provided just that and more, with runners thanking him for offering everything from encouragement to comic relief to some much-needed love.

“[He] had signs for each of us,” says friend and Wasatch runner Scott Wesemann. “I jumped in his lap and gave him a juicy kiss on the cheek and a hug. It really lifted our spirits for the next few miles.”

Van Horn is a fixture in the local trail-running community, one of only three to have ever completed the Millwood 100-mile route through the Wasatch mountains, and current holder of the fastest time for the Utah Triple Crown—the three highest mountains in Utah in one run.

Arianne Brown is a mother of six young kids. She enjoys running the mountain trails of the Wasatch and beyond. More of her writings can be found on her Facebook page, A Mother’s Write. You can also follow her on Twitter@arimom6 or contact at ariannebrown1@gmail.com.

I Tested Givego, the App that Wants to Replace Your Coach.