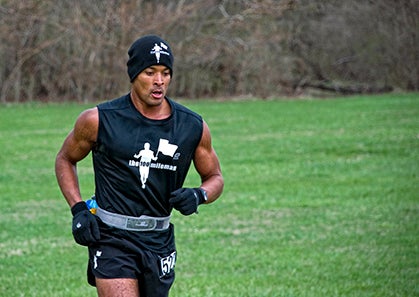 As a Navy SEAL stationed in San Diego, David Goggins was used to tackling grueling tasks that most people would think were crazy. He had gone through two Hell Weeks—the Navy’s notorious SEAL initiation rite that weeds out 75 percent of its participants—completed Army Ranger School for kicks, done tours in Iraq and had become a power lifter in his spare time.

But in 2005, Goggins, who then sported a 6-foot-1-inch, 240-pound linebacker build, decided to do something that even his fellow SEALs thought was crazy—run the Badwater Ultramarathon, a grueling 135-mile trek through Death Valley to Mount Whitney Portal under the excoriating desert sun, with almost no training under his belt.

And Goggins hates running. “He hates it,” says Aleeza Goggins, his wife. “He absolutely hates it.”

At the time, he had just learned that four of his SEAL teammates had died in combat in Afghanistan, and he decided to raise money to help their children. He reasoned that running the ultra would be an effective way to stir up publicity for the cause.

“People are definitely drawn to people suffering,” he says. “And if suffering is what it takes, then that’s what I’m doing.”

And suffer he did.

When Goggins decided to compete in Badwater, he was only running about 20 minutes every other day and had never raced a marathon.

Nevertheless, 18 hours after he discovered that he had to actually qualify for Badwater, he jumped into a 24-hour race in San Diego with the goal of running 100 miles. He ran until he literally couldn’t go anymore, finishing 101 miles in about 19 hours. During the race, several bones in his feet broke, and, afterward, his kidneys ached and he passed blood.

Following the experience, no one would have blamed Goggins if he renounced his Badwater mission, but he says, “I’m all about finding what you’re made of—finding the limits of the human soul. I don’t believe there are any.”

Twenty-two days later, he finished the Las Vegas marathon in 3:08. “He is the mentally strongest person you could meet,”  says Aleeza, a nurse. “He’s never said he’s going to do something and not done it.”

Because Goggins figured that his 100-mile feat wouldn’t get him into Badwater, in 2006, he decided to run Hawaii’s H.U.R.T. 100-miler, a punishing march over relentlessly rooty, rocky, muddy technical trails. Despite his lack of training and weakened physical condition, he finished in a little over 33 hours, placing ninth overall.

After H.U.R.T., Goggins began training for Badwater in earnest. Because he was working full-time for the Navy, he trained from midnight until 4 a.m. for several months.

This schedule wasn’t without its costs, however. To suppress the pain from his broken bones, shin splints and tendonitis, Aleeza resorted to wrapping his feet with casting tape, which meant he could barely bend his ankles as he ran. Over time, the tape created pressure ulcers. When he stepped on the line for Badwater, he says he felt like a “corpse.”

“[The training] just broke me down,” he says. “But I never wanted to quit. I knew what I was getting myself into.”

Thirty hours later, he shuffled through Death Valley to Mount Whitney faster than all but four people.

Not surprisingly, the ultra-community has begun to take notice, and Goggins has developed a level of fame for both his unlikely appearance—he was a chiseled 180 pounds in Hawaii—and his mental toughness.

“David is much larger than the majority of the elite ultrarunners,” says Andy Weinberg, race director of the McNaughton Park race. “He is a very strong and very athletic, but what makes him a great runner is his stubbornness, persistence and desire.”

He was on the cover of Runner’s World as one of the most inspiring runners of 2008, and has been pictured or featured in Best Life, Outside and other publications. He’s also given motivational speeches to high schools, local triathlon clubs, companies and other groups.

Although Goggins has enjoyed considerable success in the sport, he maintains that he isn’t a natural runner.

Enduring such pain has helped him raise about $400,000 for the Special Operations Warrior Foundation, the group he partnered with to help put the children of his deceased friends and other fallen Special Forces troops’ through college. He hopes to raise $1 million for the foundation.

“He just pushes right through the pain,” says Edie Rosenthal, public relations director for the foundation. “He’s a hero.”

Unfortunately, last May, his goal was put on hold when he learned that he suffered from a birth defect known as atrial septum defect, or a hole in the heart that causes one side of it to receive too much oxygenated blood. The condition can cause heart failure and is especially dangerous for endurance athletes and people who spend time SCUBA diving and at high altitudes.

Goggins had surgery to repair the hole and is recovering, with some complications, according to his website.

This year, Goggins hopes to participate in the Race Across America (RAAM), a 3,000-mile bike ride that starts in Oceanside, California, and ends in Annapolis, Maryland, according to Rosenthal. He was training for the 2009 RAAM when his heart condition was discovered.

If Goggins’ past accomplishments are any indication, there’s no telling how fast he can glide across the country’s trails once he returns to competition. “I will be back,” Goggins said in a statement on his website. “I will test my soul again. I will push my limits. I thank God every day that I am still here to do that.”