Is there a better training partner than … another you? 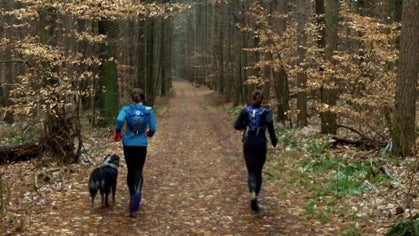 Rachel and Sandi Nypaver run through the woods near their childhood home in Ohio. Photo by Sage Canaday.

Finding the right training partner for the trails can be tough. Sure, there are plenty of people out there willing to share a run. But that individual who seems to “get” you, who knows you well enough to motivate you when you need it, or knows when to crack the right joke—and whom you know well enough to return the favor—is hard to come by.

After all, there’s only one “you,” right?

Not always. Twins—especially identical twins—have what might seem like the ultimate access to the ideal partner with whom to plan, struggle and triumph on every run, from a big goal race to a lackluster training run on a gloomy day.

“You know their pace, stride, physical strengths and mental weaknesses because essentially it’s you,” says Lisa Marr, of Bozeman, Montana, who does a good chunk of her running with her identical twin sister Lori Hartlaub. “At least the DNA is an exact replica, but we are also each unique.”

Marr and Hartlaub certainly had unique paths to their current lives. Growing up in Manitowoc, Wisconsin, they were active from an early age with basketball, tennis, gymnastics and dance; Hartlaub, Marr claims, possessed the superior athletic gift.

So identical that they once tried switching places for April Fools’ Day and went unnoticed. Yet, by their teenage years, they ran in different circles.

Marr moved to Bozeman in 1999 and kept up the active lifestyle that is a hallmark of Big Sky country. “Lisa has picked up alpine skiing, backcountry skiing, cross-country skiing, mountain biking, wind surfing, cross training, gym classes and trail running ever since she’s lived in Bozeman,” says Hartlaub [Marr adds camping and hiking to the list]. “She knows her way around the mountain ranges out here like the back of her hand.”

Hartlaub, meanwhile, went to nursing college and, alongside a family and successful career, picked up a cigarette addiction and gained weight. A visit to Bozeman in 2012 to see her sister and brand new nephew convinced her to turn things around.

“We fell in love with Bozeman and moved out three months later,” Hartlaub says. “It was my out. I quit smoking as soon as we arrived, Lisa helped me understand nutrition, and I started my weight loss and fitness journey.”

For Rachel and Sandi Nypaver, growing up competing on the same basketball and soccer teams left the identical twin sisters yearning for those things that differentiated them from each other.

“We were usually involved in the same thing,” says Rachel, who lives in Hudson, Ohio, closer to the Cleveland suburb where they grew up than Sandi, who lives in Boulder, Colorado. “We didn’t consciously choose it that way, and it probably would have been better if it wasn’t that way.”

They took their mutual interest in nearly everything for granted and even turned it into a cause for animosity, laments Rachel, who says they spent some of adolescence and young adulthood resisting what could have been a mutually beneficial bond. “At times, it was like having a built in adventure partner,” she says. “We’d go camping with family and we’d venture off somewhere together for hours, and my mom never cared since we were together and both pretty resilient.”

Sandi and Rachel as kids. Photo by Bob Nypaver.

“On the other hand, we were both pretty competitive at times, also making us rivals,” she continues. “It was really silly because we were both going through so many of the same struggles, but instead of leaning on one another, we didn’t talk at all.”

Sandi says those struggles included issues with mental health and recognizing self-worth, though neither realized it at the time. “We didn’t know how to deal with our problems, and unfortunately it sometimes separated us instead of bringing us together,” she says.

It wasn’t until college, when they quit playing basketball and discovered trail running—as well as co-founded a volunteer organization called Students Making a Difference—that they began to appreciate each other’s company.

“I now realize how futile competition is and how valuable cooperation can be,” says Rachel. “When we worked together, not only were we much happier but also much stronger and capable of doing greater things.”

“I try to take this attitude with me when I line up in a race,” she continues. “Instead of looking at the other runners as competitors, I try to view them as friends all going out there to push each other on and see what we are capable of.”

Hartlaub started by signing up for a couch-to-5K program. She says her sister’s complete support throughout that first training cycle and race was invaluable. They ran that first 5K together on Thanksgiving in Bozeman.

“I ran it in 45 minutes,” Hartlaub says. “[Lisa] stayed with me the whole way and would always look over at me and smile and encourage me. She always knew what I needed to hear even when I felt like I was going to die.”

Hartlaub was quickly hooked on running, and had a willing and patient training partner in Marr at every turn. Marr took her sister on gradually more challenging trails in the surrounding Hyalite and Bridger mountains, and accompanied her over longer races; they finished a half marathon in September 2013 and a full marathon in September. With the exception of one race, when Hartlaub could not get the day off work, they have run every race since that first 5K together. 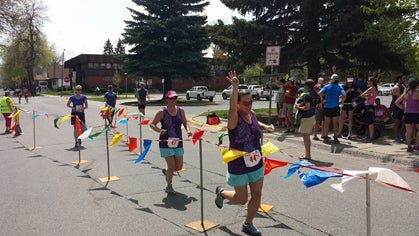 Lori (in front) and Lisa finishing a 7K together. Photo by Kurt Hartlaub.

“I got to a point in life where I put more value in seeing someone other than myself grow, improve and succeed at trail running … it was not a sacrifice for me to run shorter distances or as fast as I knew I could go,” says Marr. “I was instead gushing with pride when Lori met the goals she created, crossed the finish line at all the races and climbed the vertical of the steepest trails … and I wouldn’t have it any other way.”

“We sometimes look back and laugh that I’d drive all the way across town to go on a one-mile run/walk with her from her house,” she continues.

Discovering Dirt and the “Fast Genes”

Running was apparently in the Nypavers’ DNA from early on. Sandi recalls being woken up early in the morning by Rachel to run the grassy hill in their apartment complex while wearing ankle weights. They would go on two-hour training runs to gain fitness for basketball. They enjoyed the running aspects of soccer, but got bored with the rest.

After a college basketball season ended, they trained for and ran a half marathon together. Then, in what Rachel describes as “fate,” Sandi was selected in 2009 to be a youth ambassador with Impossible2Possible (i2P), an organization designed to educate and inspire youth on conservation issues through wilderness expeditions, on a trip to Akshayuk Pass in Canada’s Baffin Mountains.

“The guides on the trip included ultra legend Marshall Ulrich, i2P co-founder and distance runner Ray Zahab, and professional athlete and coach Jen Segger,” Sandi recounts. “As soon as they started talking about their running adventures I knew I wanted to be an ultrarunner and explore as many trails and mountains as I could.”

Upon returning from the trip, Sandi told Rachel—who had recently joined the cross-country team—everything she had seen and learned. “Something clicked for her as well,” says Sandi. “I quit my basketball team and shortly after Rachel did, too. From there we got into trail running together.”

In the interest of avoiding the competitive animosity that drove them apart as teenagers, they first swore they would never run the same race. Rachel paced Sandi to her first ultra, victory at the Mohican 100-Mile; she then followed with her first ultra that fall. 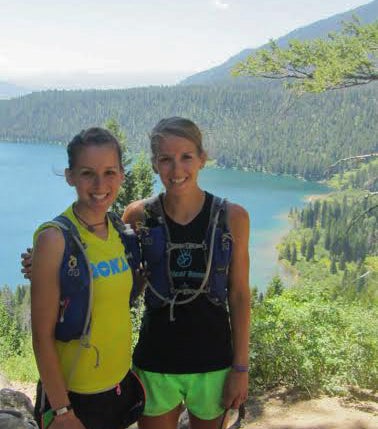 Rachel (left) and Sandi on the trails. Photo courtesy of Sandi Nypaver.

Somewhere along the way, they dropped their competitive edge and learned to appreciate each other’s influence, inspiration and help.

“I have humbly accepted that Sandi is much faster than me and [since then] we have done a few races together, like the Silverton Marathon,” says Rachel. ”It’s hard to stay together though, when I barely see her after the gun goes off. To be honest, sometimes I think it’s a little unfair that we’re twins and the fast genes skipped over me, but for the most part I’m just happy for her.”

Sandi, for one, is grateful for the company when she can get it.

“I think together we found that spending time outdoors and running trails helped us to cope with our individual demons and it somehow helped us to believe in ourselves in a way we hadn’t before,” she says. “We grew individually, but we also grew together. Our love for the outdoors plays a huge role in each of our lives, and having someone to sometimes share that with has been pretty awesome.”

Sharing the Trails; Dealing with Distance

For Hartlaub and Marr, living together has been key to their bond, on and off the trails. Hartlaub says her sister’s presence keeps her accountable and motivated to hit the trails and the gym, and Marr says having someone with whom to share the trails has made experiencing them that much better.

“Misty mornings running by a mountain lake, the familiar call of the Clark’s nutcracker, wind howling in the distance through the high peaks … I love the rush of the ever changing trail, the challenge of jumping over deadfall and the feeling that I could keep running forever,” says Marr. “Running in the mountains pushes my physical limits and makes me want to try harder, be better, get faster.” 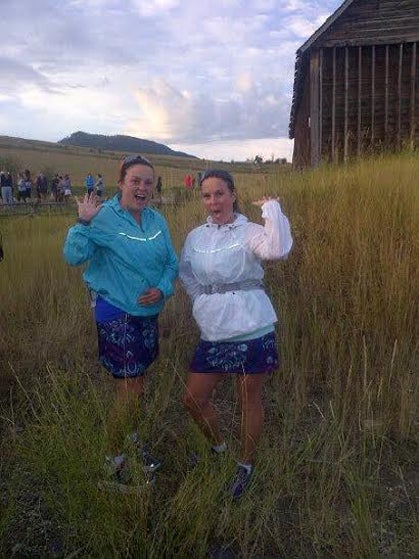 Hartlaub (left) and Marr enjoy each other’s company on the trails. Photo by Kurt Hartlaub.

“I wanted [Lori] to see what I saw and experience what I’d experienced,” she continues. “I wanted to show her that there were so many experiences that you could have in life and that you invent them or create them and then make them happen.”

The Nypavers, meanwhile, have not lived in the same place since Sandi left for Colorado, but they keep in close contact.

“I wish we could train together,” says Rachel. “It’s just hard a few hundred miles apart. However, [Sandi] did coach me for the Forget the PR 50K and the Cumberland Gap Ridge Trail Marathon this year, plus we did a summer twin adventure and hiked and ran through the Grand Tetons.”

Sandi says the distance has also made her appreciate her sister’s role in her life even more.

“I may not get to train with Rachel a lot, but she’s in my head a lot during the hard runs,” she says. “We can both be too hard on ourselves. I do my best to be positive, but every now and then I have a run where I think, ‘I’m slow and I suck.’ Then I normally have Rachel in my head saying to just do the best I can for the day, and to believe in myself even when it’s hard.”