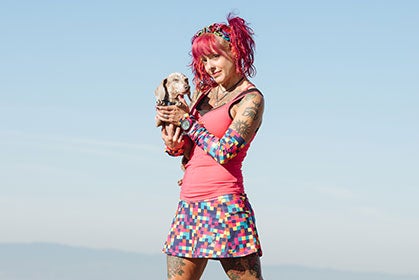 Catra and TruMan pose during another mountain run. Photo by Matthew Reamer.

Fifty-year-old ultarunner Catra Corbett doesn’t blend in with the crowd. Her hair is fuchsia, tattoos and piercings cover her body and face, and she has an affinity for bright-pink running skirts. Surprisingly, though, it’s not Corbett’s eclectic style (or her lengthy ultrarunning resume) that gets her the most looks but the nine-and-a-half-pound dachshund running beside her.

TruMan is not your average dog. Standing eight inches tall from the bottom of his gray paws to the top of his furry head, 9-year-old TruMan runs an average of 40 miles per week. And this isn’t run-of-the-mill, ’round-the-block running: TruMan runs mountains. Corbett, who lives in Fremont, California, and has finished over 100 100-mile races, has an avid Facebook following and often shares pictures of herself holding TruMan at the top of a mountain. Says Corbett, “He loves going up peaks, and does fine up at 12,000 feet.”

Corbett adopted TruMan around two-and-a-half years ago from Northern California Dachshund Rescue not long after her dog, Rocky, passed away.

“I fell in love with the poor, scared dog who hid under the furniture for months,” says Corbett. On their first few walks around the neighborhood, TruMan would freeze in terror at the sound and sight of passing vehicles.

To build his confidence, Corbett took TruMan to her front yard during rush hour. At first, he buried his head into her lap in fright, but eventually he stopped shaking. The following day, Corbett brought TruMan to a nearby trailhead. “We ran two miles and he seemed to love it,” she says.

Now, TruMan logs more miles than many human runners, with long, 20-mile runs every second or third week. On the trail, he often eats the same real-food snacks as Corbett—almond-butter packets and baby food—and drinks from her water bladder.

“He got a second life,” says Corbett. “TruMan has seen more than most people do and see in a lifetime.”