Chapter Eight: The Science of Endurance

Since 2015, Shawn Bearden, professor of exercise physiology at Idaho State University, has produced dozens of conversations with the world’s leading physiologists, runners, sports psychologists, cardiologists, and nutritionists on the topic of ultrarunning. In short, he knows his stuff. And now it was my turn to pick his brain.

“Historically speaking,” Shawn said, “humans were active and moving 99 percent of the time. That’s how we evolved and that’s what our bodies expect. We have to start turning around this idea that exercise is a stimulus. For the majority of human existence, exercise was the norm or the baseline and being sedentary was the exception.”

Obviously, we’re all walkers, but I always believed that we were runners, too. And I was convinced that Shawn, who was currently training for a hundred-mile race, would agree. Instead, he completely downplayed my efforts to paint humans as adept runners.

“We are built to keep going, keep moving; we are built mostly for walking,” said Shawn.

It turns out that our most effective evolutionary “assets” for running—our butts—are engineered more for sprinting and climbing than for long- distance races.

“But . . .” I stammered, and hesitated a bit before treading on sa­cred ground.

Before I could reply, he responded resolutely. “No. No, we have not evolved to be distance runners. We’re not even really built to run a marathon. We are born to walk fast and sometimes run.”

He continued, “The idea that our ancestors evolved to be long-distance runners is an extension of a misunderstanding of persis­tence hunting. Evidence suggests that the humans who tracked animals were only going about thirty kilometers or so in a hunt, and that they walked the majority of that distance. There was only a little running.”

“But . . .” I stammered, and hesitated a bit before treading on sa­cred ground.

Before I could reply, he responded resolutely. “No. No, we have not evolved to be distance runners. We’re not even really built to run a marathon. We are born to walk fast and sometimes run.”

Shawn discounted the idea that Homo sapiens evolved from dis­tance runners by defining persistence hunting—which involves chasing prey to the point of exhaustion—as a fast-paced walk with a few bursts of running.

If that strategy worked best for prehistoric man, I wondered if it would also be the best approach on a trail record. Maybe I could have completed the trail faster if I’d been willing to run the flat and down­hill sections of the trail?

Shawn suggested that when covering long distances on trails, walking uphill is always the better approach. The same holds true for level ground. Running is obviously a faster way to go downhill but causes more damage. You want to move downhill as fast as possible with as little effort as possible, letting gravity do the work while you use your legs as subtle shock absorbers. So when carrying a pack—as on a self-supported or unsupported FKT—running downhill is a bad choice. Speed doesn’t outweigh the ability to keep moving injury-free.

What Shawn and I didn’t discuss is that athletes are willing to wreck their bodies to reach the end of the trail. Scientifically speak­ing, walking is the more self-preserving method of covering more than two-thousand miles, but there are plenty of runners willing to sacrifice knee cartilage and future athletic aspirations for one FKT. Hikers might come out of the endeavor with less physiological dam­age, but that doesn’t mean that a runner won’t set the record. 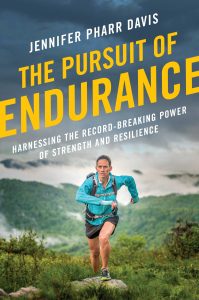 I also need to emphasize that the topic at hand is entirely different from the modern objective of maintaining a healthy lifestyle. For 99 percent of folks, anytime is a great time to run. Getting out of our sedentary lifestyles and working up a sweat is healthy and important. But working up too much of a sweat on a record attempt can be a problem. This discussion is about the distance runners will travel be­fore hikers pass them.

According to Shawn, “The two components of utmost importance when carrying your body a very long distance are wear and tear and energetics.”

I wasn’t sure of the exact definition of “energetics,” but its root made me think that Shawn was referring to output and exertion. For a layperson I wasn’t far off, but for a scientist like Shawn energetics encompasses the entire energy transfer process, including aspects such as thermodynamics.

Humans are able to walk all day because we evolved the necessary trait of regulating our body temperature with sweat. The human body’s ability to stay cool during prolonged periods of exercise his­torically helped us track and hunt animals. Today, it helps a construc­tion worker put in a ten-hour day in the summer sun, or a farmer work his land for hours in high humidity, or an endurance athlete set an FKT. The key to staying out there is to work steady, not hard.

“Ideally, you want to be covered with damp skin or a thin layer of sweat that is evaporating,” said Shawn. “You don’t want to be drip­ping. Sweat that drips is precious fluid wasted.”

The more I talked with Shawn, the more I regretted vying for a record in the heat of the summer. The fact that I’d started in mid-June and finished in late July meant my body was having to work overtime to cool itself down, which led to a substantially higher aver­age heart rate than if I’d been pushing myself down the trail during the cooler months.

On the other hand, summer afforded me more daylight than if I’d made a spring or fall attempt—and I didn’t have to deal with snow or ice. For a particularly strong night hiker or someone with loads of experience running ultras in the dark, daylight might not matter. But as a southern girl, I was conditioned to heat, and I think opting for daylight was still the right plan of attack.