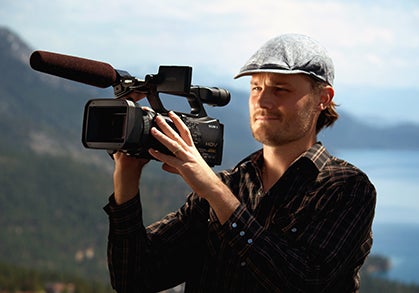 Filmmaker and ultrarunner JB Benna took stock of his life last July at the finish line of Oregon’s Siskiyou Out Back 50K. The previous summer, Benna and his six-man camera crew had amassed nearly 80 hours of footage of California’s Western States 100-Mile Endurance Run including interviews with the top four contenders.

Benna had spent every spare dollar on shooting Unbreakable, the latest and largest film project of his life. He now faced a monumental task: editing that 80 hours down to a just-under-two-hour finished movie about the country’s oldest and most prestigious 100-mile race.

“I had to finish the film in time for the Christmas holidays in order to make my money back,” says Benna, 33, of Reno, Nevada. “So I decided that something in my life was going to have to give, because I couldn’t work 20 hours a day, allow my wife to train for her ultramarathons, raise a baby and train myself.”

He made a decision and stopped running … completely. After seven years of regular trail running, Benna embarked on a different type of mission—six months of film editing.

For those months, Benna’s daily routine consisted of working a full-time day job as a video and photo production manager for Quin Street Media then working at home on Unbreakable from 8 p.m. to 3 or 4 a.m. The sleeping bag in his home office became his constant companion.

“Filming wasn’t really the challenge,” says Jennifer Benna, JB’s wife and Unbreakable’s producer. “The post-production work was, for him and our family, extraordinarily difficult. Our daughter and I did not get to see him much.”

Benna met his self-imposed deadline, though, and had the movie wrapped up for its world premiere—the night before The North Face Endurance Challenge Championships—in San Francisco last December.

“It was the first time I had seen the finished film all the way through,” he says, “because I was still working on it the night before. The best part of the showing was how into it to it people were. They were cheering and clapping, especially each time someone crossed the finish line.”

Unbreakable has since received more than 50 screenings, including several in England and Japan.

“The editing sets the film above anything I’ve seen in this genre,” says Hal Koerner, two-time Western States winner and one of the four featured runners in Unbreakable. “The movie flows, from the history of the race to the lives of the runners.”

Benna’s ability to stay focused has served him well not only in completing Unbreakable, but also in finishing four other feature-length adventure films, through hiking the 2650-mile Pacific Crest Trail (PCT) and completing 25 ultras, including three 100-milers.

“I was with him the night before he filmed the [Western States] race and watched him put the plan together,” Koerner recalls.  “He was focused on the big picture at all times, telling one cameraman where he’d be at what time and what mile mark the next day, almost like he was directing his own ultramarathon crew and pacer.”

Benna stands 6’4″, has thick dark hair and a scraggly beard. His love of the outdoors dates back to a childhood filled with snowboarding, skateboarding and exploring the trails in the Sierras around Reno. In high school, he discovered filmmaking when he and a friend created their own animation film. “When I graduated from high school I knew I wanted to be a filmmaker,” he says. “I became good at snowboarding and skateboarding with a camera.”

JB enrolled in film school at the University of Southern California in 1998. Following graduation, he remained in Los Angeles, where he worked for several years in a variety of post-production editing jobs for Disney, Warner Brothers and other studios.

In 1999, while still in film school, Benna decided to through hike the Pacific Crest Trail the following year and film his experience. He created a film company—JourneyFilms—and searched for financial backers.

Though he filmed and finished his PCT hike in 2000 (without ever finding investors), Benna was unhappy with the results and shelved the project. “Instead of trying to find partners, I decided to set aside some money and pay people,” says Benna. “I came to the realization that if I was going to do this I’d have to do it on my own.”

It took five more years and a personal introduction to trail running before the PCT became a subject for Benna’s first feature film.

Says Benna, “One of my hiking partners was into ultras, so I watched the Baldy Peak 50K. And I thought, ‘If I can hike 30 miles in a day, then I can mix in some running and do a 50K race.’” It was 2003 and Benna ran trails for three months to prepare for his first ultra, the Ridge Crest 50K.

Through the ultra community, Benna heard about ultrarunning legend David Horton, who was training to become the first person to run the entire PCT, in 2005. Benna seized the opportunity he had waited for to finish his five-year-old dream of a film about the PCT.  He signed on as both Horton’s crew and cameraman.

To capture Horton’s 66-day journey, Benna hiked, ran and drove thousands of miles, much of it carrying a 10-pound camera, as well as food to resupply Horton.

“Benna understands the emotions of doing a long journey,” says Horton. “He asks very probing questions, because he knows about the difficulty, the mental pressure and mental toughness it takes to do those things.”

The result was The Runner, a film that won awards at four film and music festivals the following year.

In Unbreakable, Benna’s sensitivity and understanding are most clear in his treatment of the race’s eventual winner, Geoff Roes. He follows one of Roe’s rivals, the night before the race, eating in a fancy restaurant and whooping it up with friends. In a deftly crafted contrast, the film cuts to the solitary Roes not long before the race, camping in the woods, preparing pasta in his cook kit and contemplating the monumental task at hand.

Benna has a personal motive embodied in his company’s mission statement for choosing his subject matter: “… raising awareness for conservation, simpler living, and greater appreciation of the world.”

“I love being outdoors,” says Benna. “I want to inspire people to get out there, to share stories of simple living.”

As more people see his films, especially Unbreakable, that mission is being furthered in another way. Says Benna, “Many of the showings have been held as fundraisers for non-profits. So far the film has helped raise almost $40,000, and much of it is to preserve trail systems.”