What keeps 88-year-old Bob Hayes on the trails 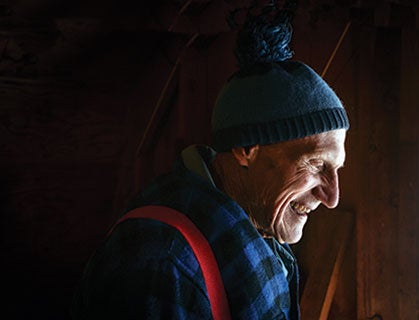 Bob Hayes at home in the Montana mountains. Photo by Erik Peterson

The gaunt runner crawls out of the bed of his silver Toyota Tacoma truck, where he had just spent the night parked in an empty lot on the edge of town. It’s 5:30 a.m. when he slides into the front seat, cranks the heater on high and warms a slice of leftover pizza on the dashboard.

He eats in the dark, takes his two 14-year-old Cairn Terriers for a walk and heads for race headquarters to sign in for the Two Bear Half-Marathon in Whitefish, Montana. The race director is sitting at a folding table with a list of runners, checking people in.

“Eight, twenty-two, twenty-six.” The race director pauses, raises an eyebrow and looks up. “You mean 1926?” he asks, in surprise. 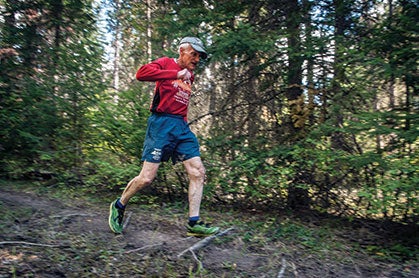 Hayes cranks out a six-mile training run on one of his favorite local trails. Photo by Erik Peterson

In 1987, Hayes, a non-runner at the time, helped form the Evaro Community Center, in a small town just west of Missoula. To raise money to maintain the facility, they put on a race—the Evaro Mountain Challenge.

“We didn’t know how many people would come, so we decided all the members of the board of directors had to run too,” he says.

“And then of course I got hooked,” he says. “And I just kept on running after that.”

According to his son Tom, though, the genesis was a bit more rocky.

“Up to that time, dad had pretty much ridiculed my brother and me for running,” says Tom, a lifelong runner who has completed more than a dozen 100-mile races and more than 30 marathons. “He thought we were pretty silly, running around in circles.”

Then came that Evaro Mountain Challenge.

“I thought, ‘Oh, my God, dad’s gonna run,’” says Tom. “Up to that point, dad had never worn a T-shirt as an outer garment, never wore shorts beyond swimming and had never worn tennis shoes.”

Tom’s father had cruised timber all his life and was in extremely good shape, but actually began training a few months before the race. Tom recalls watching his father run in his irrigation boots (the hayfield below the house that he used as a track was wet), a pair of black logger jeans and a plaid shirt. Hayes stuck with that running kit for more than a month until his sons finally bought him a pair of running shoes.

“So then it was black jeans, plaid shirt and running shoes. We told him that you can’t run in jeans. He said, ‘Well I’m not showing my legs,’” Tom recalls. “Well, on the day of the race, dad comes jogging down from the house to the starting line, and I’ll be damned—he had cut his black jeans off to the knees and he still had his plaid shirt on.”

His outfit has progressed since those early days. T-shirts constitute the bulk of his wardrobe. Hayes estimates he’s run around 700 races and has boxes full of race shirts, each one a memory that helps sketch a map of the past 27 years of running.

That first 5K in Evaro spurred him on to more 5Ks. Then he tried 10Ks, then half-marathons and finally marathons. Eventually he started hearing about people running even farther, on trails through the mountains.  So he gave it a try. In 1995 he ran his first ultramarathon, Wyoming’s Bighorn Mountain Wild and Scenic Trail Run 50-miler. 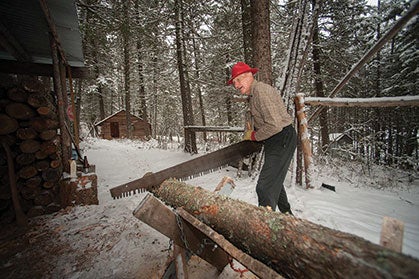 Laying in the winter firewood supply. Photo by Erik Peterson

Hayes grew up in a small town in the center of Vermont. After high school, he served in World War II, came back home and went to college on the G.I. Bill. He met his wife of 50 years, Ann, while in college there. He transferred to the University of Montana, where he graduated from the Forestry Department in 1953. He began his 40-plus-year career as a timber cruiser for lumber companies. Cruising, or examining stands of timber for their commercial value, kept him in good shape; he was hiking up and down mountains a few days a week.

His three children all ran in high school, and continued to run, to varying degrees, into adulthood. Even Ann, after the initial surprise of Bob’s running interest, got on board. For years she and Bob traveled to races around the state and ran together.

In 2006, when she was in her 70s, Ann got sick. That same year, though, Ann and Bob ran a 30-kilometer race together, one of Montana’s Bighorn races.

“She had Alzheimer’s really bad at that time and she couldn’t talk,” says Hayes. “I ran with her so she wouldn’t get lost.”

His voice lowers and his watery eyes stare out the kitchen window at a sugar maple tree he transplanted from their home state of Vermont. It is late summer, and the leaves are beginning to turn color. During that final race with his wife, she had fallen a few times and was bleeding from both knees and an elbow. But as they descended the final few miles to the race’s finish line, Ann began to sing. By the time their son Tom saw them coming down the final hill, “They were holding hands, laughing and singing,” he says.

Ann’s health went downhill quickly over the next 11 months. Hayes kept her at home and cared for her around the clock, feeding her and watching her fade each day.

He ran little that year. Now, the miles help rekindle the memory of his wife and their life together. And it helps Hayes forge new friendships.

Finding running partners his own age is nearly impossible, but Hayes has found a faithful running friend in Georgia Cobbs, whom he met five years ago at a contra dance. She’s 56, but still struggles to keep up with him. They train together once or twice a week and often race together on weekends.

“He’s quite an inspiration,” says Cobbs. Hayes, she says, provides the motivation to get up early in the morning and go run, even when it’s snowing.

A Fixture in the Running Community

“Everyone in town knows Bob,” says Cobbs, referring to Missoula, a western Montana city with a population of 68,000 and an active outdoor community. “Ninety percent of the people I talk to know him or have some connection with him.”

There are even T-shirts featuring his photo on the back with the motto, “I Wanna Be Like Bob.”

There are very few his age who are still running. And here in Missoula, he is all alone. When he crosses the line these days he automatically wins his age group.

“I tell everybody I was first, second and last in my age group,” he says, laughing. Hundreds of awards—ribbons, medals, plaques—decorate his walls, his china cabinet, his kitchen table and most other corners of his mountain home. He still participates in at least one race nearly every weekend.

“It’s kind of a social occasion for me now,” says Hayes, sitting at his kitchen table, set for one.

Piles of books, handmade greeting cards and magazines cover the remainder of the table. Dinner is a small glass of red wine, corn on the cob from his daughter-in-law’s garden and the final slice of that pizza leftover from his race the previous weekend. His dogs sit, one on either side of him, waiting for handouts. They rarely leave his side.

“It’s a lot of fun to go out there and meet all these people. I’m not getting any faster or any better,” he says, “but I still keep at it.” 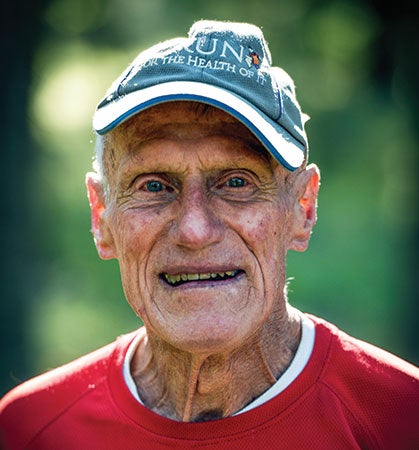 Life on the Farm

It’s not just running that keeps Hayes active. He still raises two or three beef cows each year to butcher for the meat. He still cuts his hayfield driving a 1930s-era Ford tractor. He still goes contra dancing a couple of times each month. He taps that sugar maple outside his kitchen window each spring to make syrup. He learned calligraphy and uses it to create greeting cards with sketches. And he cuts his firewood by hand in the winter using an old crosscut saw, “because it’s good exercise.”

“What really stands out about him is he won’t refer to himself as old. He doesn’t ever say I’m getting old, or use that as an excuse,” says his daughter-in-law, Liz McGoff.

Hayes’ ectomorphic frame slumps forward and his elbows swing wide as he runs the singletrack leading into a forest of larch and Douglas fir above his home. He’s averaging 14-minute miles as he makes his way up the hill. It’s not fast, but, then, that’s not the point. He slows to a walk as the grade steepens. “That red bush is called serviceberry,” he points out. “The old-timers call it sarvice berry.”

He’s doing a six-mile, mid-week training run on the trail he has run hundreds, maybe thousands of times. It’s the route of that first race he ran 27 years ago wearing cutoff jeans and a plaid shirt. These days he dresses like a runner: shorts, technical shirt and running shoes. A running hat, with the feather of a flicker bird stuck in the side, covers his silver hair.

He’s from a generation that doesn’t see things like cutting firewood by hand, or running impossibly long distances, as worthy of any fanfare. It’s just something you do and there’s no sense making a big deal of it. If pressed, he will admit that running at his age isn’t normal. “But runners aren’t normal anyway,” he says with his trademark wheezing laugh.

As he crests the final hill that leads back down to his home, he slows and opens up again. He talks about the high you get after a race, and how much he enjoys the community of runners. He talks about the health benefits through the years. But he doesn’t get overly philosophical. It’s just something he likes to do and it gives him purpose.

As he jogs down the hill, he says, “I keep running because I know when I stop, that’s it.”

Erik Petersen has been a Montana-based photojournalist for 15 years. He is finishing his master’s degree at the University of Montana, where he also teaches photojournalism as an adjunct instructor. He lives with his wife and two sons, and can be reached at erikpetersen.photoshelter.com. This article originally appeared in our June 2015 issue.