As an aspiring mountain runner who lives in Iowa, Kyle Dietz is an underdog. But the former MMA pro says that’s exactly where he wants to be 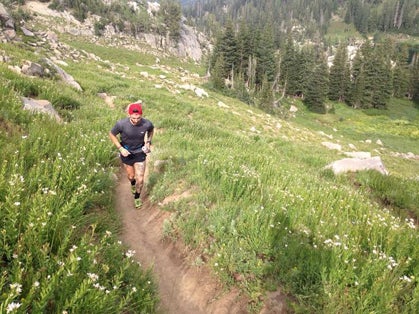 Dietz on a training trip to Utah’s Wasatch Mountains. Photo by Jason Eichhorst

It was dark, save for a handful of bright-shining lights, and Kyle Dietz was nervous before the contest began.

“It was weird, knowing I was going to be fighting on live TV in front of thousands of people,” he says.

That’s right—Dietz wasn’t at the start line of an ultra before dawn. He was in a ring, waiting for the starting bell, fighting live on Pay-Per-View in a bantamweight mixed martial arts (MMA) fight.

Flash forward a few years, to September 2014. Dietz again stood in the dark, with bright lights surrounding him. But this time the lights were headlamps, and he was on the starting line of The Rut 50K in Big Sky, Montana, standing just behind race favorite Sage Canaday.

How did he get there?

Born and raised in Davenport, Iowa, Dietz did what every kid in Iowa did: he wrestled. But his wrestling career ended before high school, so he took up boxing.

“My old wrestling coach and mentor lived next door, and he asked me what I was going to do next,” says Dietz, now 28. “I said I didn’t know, and he said ‘you should try MMA.’ I had no idea what it was.”

But as soon as Dietz started looking into it, his interest was piqued. He started fighting, and in what has become a signature move, dedicated himself entirely to his latest pursuit. He got some paid fights and eventually turned pro. 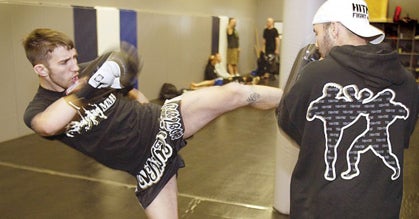 Dietz rarely lost a fight, and the money was good. But he got the sense he wouldn’t want to be a professional fighter forever.

“It’s a tough sport, and between getting beat on and training hard you really put your body through the grindstone,” he says. “Plus being away from my family so much for competing and training got old.”

And so, seemingly just as quickly as he entered the MMA world and took it by storm, Dietz left the sport.

Not that Dietz would sit still. He took up cycling and triathlon, again immersing himself fully in the task.

“It’s always been in his nature to be like that,” says Fred Dietz, Kyle’s father. He recalls Kyle’s pre-wrestling fascination with BMX and trick bicycling. “Every birthday and Christmas you’d just get him parts for his bike. He had to exceed, to be inventive at it—not just be good at it.”

Then one day, he and a friend went on a training run and struck off the beaten path, onto the trails in a park near Davenport. It was a game-changer.

“I felt like a kid again, running around in the woods,” says Dietz. “I was hooked.”

That same friend and training partner suggested they sign up for The North Face Endurance Challenge Madison 50-Mile. Dietz ran with his friend for 30 miles.

“Then he sent me on my way,” Dietz says. “I felt great, like I sprinted in that last 20 miles. So ever since then I’ve been running competitively.”

Dietz was hoping to surprise some people at The Rut—and given his training base in Davenport, whose elevation and topography could not be more disparate from that of Big Sky, his 8:49:06 on the brutal course was impressive—but he called his performance “disappointing.”

If Dietz has his way, he will have a second shot at The Rut and other skyrunning races like it, where the ultra distance is coupled with extreme elevation and terrain in the mountains.

“I want to do more mountain running, and be a competitor in the Skyrunner series,” he says. “That’s where I want my focus to be and I think I can compete with those guys.”

He’ll have his work cut out for him, training in the Midwest. But he says the underdog role is something he relishes.

“I’m limited by being [in Iowa], and I’ll always be an underdog compared to guys who live at altitude and get to train on that kind of terrain every day,” he says. “But you have to make do and be creative.” 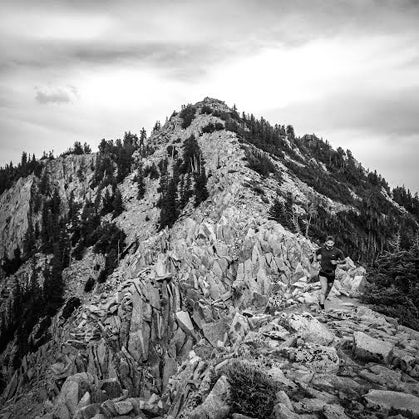 Dietz gets to the mountains to train when he can. Photo by Jason Eichorst

That means lots of hill repeats and long repeats on a treadmill with wood stacked underneath to achieve a higher incline. It also means a lot of cross training.

“I have a great Crossfit coach who can tailor workouts to help with whatever events I’m training for,” he says.

“[Dietz] is a great mover and a natural athete, so he can transition well between sports,” says that coach, Brandon Bartz. “Mentally, he’s a fighter, so he stays super focused on his path. He takes it on as a lifestyle.”

Except for one notable exception: Dietz won’t relocate. Why does he stay in Iowa despite a love for the mountains and an appetite to compete as a mountain runner?

It is an easy decision, Dietz says—one that is informed by family. He has a 9-year-old daughter whose mother lives in Davenport, and the rest of his family is there as well.

Dietz’s father reiterates that leaving is not an option Kyle would entertain. “I remember when he was getting really good at MMA, and at a certain point you have to move somewhere that has a bigger gym so you can train seriously,” says Fred. “The closest one to here was Chicago, so he moved on to another sport. That’s who he is.”