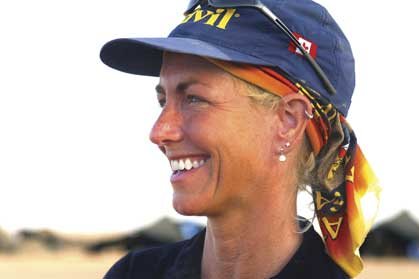 While many runners might see an impending hip replacement as reason to lay off the miles, Sandy McCallum has turned her recent hip-degeneration diagnosis into an excuse to cram in as many miles while her body still permits it.

The 51-year-old ultrarunner is no stranger to pushing through pain. She’s a nine-time veteran of Morocco’s grueling Marathon des Sables (MdS), a 150-mile, seven-day stage race across the Sahara Desert. She’s raced a total of 2337 desert-race miles on four continents, and holds a Guinness World Record for being the first person to run six desert ultramarathons in one calendar year.

Born in Red Deer, Alberta, Canada, to a father in the Canadian Armed Forces, McCallum spent her childhood moving around Europe. Exploring trails behind her house in Germany and venturing into the Black Forest planted the seed for her trail-running passion. Since then, she has traveled to more than 40 countries and has lived everywhere from Sardinia to Japan.

In the 1980s and 90s, she worked as a national reporter in Canada. As a way to cope with the stress of constant deadlines and the overwhelmingly negative content she reported on, she says she began smoking and, after work, hitting the bars with coworkers.

Around the same time, several friends training for the New York City Marathon convinced her to join them. “I ran a half mile down my street, turned around and ran back,” she says. “I remember collapsing on my couch, winded, and thinking there was no way in hell I’d ever run a marathon.”

But after eight months of training, she did just that, finishing in 4:25. (Years later, she lowered her marathon PR to 3:36 .) In 1998, she left her 13-year career as a national reporter. “I was tired of being stressed out and negative,” she says. “I longed for something else, but I didn’t know what it was.”

Shortly after quitting her job, she read about the MdS in a newspaper and, on a whim, signed up for it. She believed that the race would point her “in the direction of what I would do for the rest of my life.”

“When I got off the plane in Morocco, I breathed in the air and felt like I was home,” she says. “I’d never felt happier [than] when I first raced through the dunes.” Just before the race began, though, she developed dysentery—an inflammation of the intestines, causing diarrhea, vomiting and stomach cramps. She began the race anyway but, by day four, had to drop out.

So she returned to MdS the next year. After completing the race that year, she decided to try to make a living as an adventurer, public speaker and freelance writer.

In 2006, she met another runner, Jim Molaschi, at the 150-mile Racing the Planet Gobi March in China. They crossed paths again a year later at another Racing the Planet event, the 150-mile Sahara Race, where she won the women’s race. After several years of sporadic email contact, she and Molaschi began dating in 2009, when McCallum moved to the States—and celebrated their new relationship by running the 250-kilometer Namibia Race in Africa. Soon after, they married, and now reside in North Miami, Florida.

Next year, she plans to take on two new challenges: the TransOmania and TransArabia races—nonstop, self-supported, 300-kilometer foot races (as opposed to stage races) across the Wahiba Sands desert in Oman from one gleaming coast to another, and across Jordan from the Dead Sea to the Red Sea.

As for her hips? She’s not worried. “Doctors have been known to be wrong,” she says, “and the human body is an amazing machine. My mantra is finding a way.”

Most desert ultramarathons run in a single calendar year