Using trails for the greater good 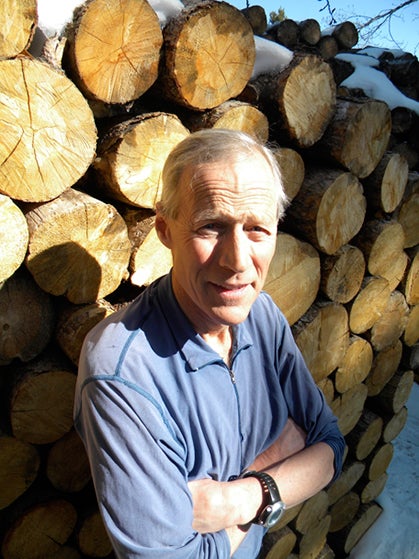 Dr. C. Louis Perrinjaquet is a cross between Santa Claus, Robinson Crusoe and a Tarahumara Indian, with a hint of Mother Theresa.

His trail-running shoes—the “PJ 5s”—are sandals he made from a snowmobile-trailer tire and nylon climbing webbing. He runs, in the words of longtime friend Jeffrey Bergeron, “like an elf.” He was once Michael Jackson’s personal doctor but now specializes in family and sports medicine in the small ski town of Breckenridge, Colorado. He rides a bike instead of driving a car, spends half his annual income treating impoverished people in wild nations and is the only person to have completed all 14 editions of the Breck Crest Mountain Marathon, a 24.5-mile, above-treeline behemoth that climbs 5,500 vertical feet.

Doc PJ, as he is known around town, never turns on his heat unless he has visitors; he prefers to work in the down suit a friend bought him, even on nights when it is 20 degrees below zero. He takes cold showers to conserve energy, buys giant bags of rice and beans to avoid excess packaging and brings used plastic sandwich bags to his local natural foods store so the owner won’t buy new ones. He also teaches transcendental meditation out of his living room and breathes exclusively out of his nose.

During the summer, PJ, 54, runs six or seven days a week from his back door. He is lithe and strong, like a healthy aspen, and is quite youthful looking for a man his age. But he doesn’t run to maintain his appearance, or to train for the Breck Crest, or to be social. He runs because it’s the best way he knows to prepare for his self-funded medical missions—the twice- or thrice-a-year trips he makes to ravaged Third World countries like Darfur and Haiti.

Native to an 800-person farm town in Iowa, PJ is a jungle doctor. He often spends a week tromping through dense bush with a 50-pound pack to get to those in need. If he is not fit enough to make it, the entire mission is useless. So he runs his local dirt roads and trails religiously, always on his toes, sometimes with a bugle, sounding the call at the top of mountain passes.

He has treated people in 13 countries over 20 years, including 15 trips to Honduras. The needs vary by locale: in Darfur, in 2007, he spent much of his time cleaning out gunshot wounds; last year in Cameroon, his primary task was to pull pygmy teeth that’d been filed sharp as razor blades. He says $5,000 to $10,000 can treat 5,000 people and also provide supplies and infrastructure.

“You can relieve a lot of suffering by doing really simple stuff,” he says. “In Cameroon, I probably saved two or three people’s lives just by pulling bad teeth.”
Race Saver

In 1991, PJ was working in Vanuatu in the South Pacific, when he saw a diabetic man with no shoes. PJ gave him the shoes off his own feet. And to fill the void, he made a pair of sandals out of tire rubber—the PJ Line was born.

He wears the hand-made creations for the Breck Crest every year, over his bare feet, like a blonde-haired, blue-eyed beach bum. Only on Labor Day weekend of 2004, when the heavens dropped a foot of snow and the wind blew like a hurricane at 12,000 feet, did he stash a pair of socks in his pocket. That was the year CNN covered the race.

In 2006, however, after 12 years of growth that saw PJ’s competition balloon from 30 runners to more than 500, the Breck Crest ran into problems. Due to time constraints among its organizers, the race was canceled that year and was said to be in danger of dissolving for good.

Doc PJ, however, couldn’t let his beloved Breck Crest die. He lobbied his friends on town council, whom he often gives free flu shots. “The only thing he’s ever asked of anyone was to save the race,” recalls Bergeron, a councilman and one of PJ’s closest friends.

In the end, a local mountain-bike promoter picked up the race and has organized it ever since, honoring PJ’s annual finish over the loudspeaker.

“I think PJ’s presence at the race each year—especially knowing his substantial humanitarian work—is a sharp reminder that there’s a lot more important things in life than a trail marathon,” says Lapides, a Crest mainstay. “He’s the thread that ties the race back to its roots—simply a super-fun adventure that locals undertake because it’s a cool way to spend half a day in the mountains they love.”

At the bottom of his e-mails, just above his name, PJ always writes the same thing: “LIFE is Bliss!” He lives it.

There are things that disturb him, though. When he was in Darfur at the height of its genocide, he wanted to exercise. “I was like, ‘I’m going to go for a little run.’ And they were like, ‘No. You’d be killed.’” But in PJ’s World, something always brings back the bliss. One day, as he was in between patients and waiting in the entryway to his grass hut, a five-year-old Darfurian boy fought past the other kids, snatched PJ’s water bottle and disappeared. An hour later, PJ felt a tug on his shirt. “The little boy had stood in the long UN lines and filled up my bottle,” he recalls with a grin.

At home, PJ quietly supports a number of local residents who either need medical care or money. Friends talk a lot about his “generosity of spirit,” as Lapides puts it.

“I would hate to see this town without PJ,” says Breckenridge adventure racer Monique Merrill, who owns his favorite coffee shop, Amazing Grace. “I think a lot of people’s lives would be much worse off.”

Devon O’Neil is a freelance writer in Breckenridge whose work can be viewed at www.devononeil.com. A story he wrote in 2006 on mountain runner Danelle Ballengee was listed in The Best American Sports Writing.

This article originally appeared in our August 2010 issue.