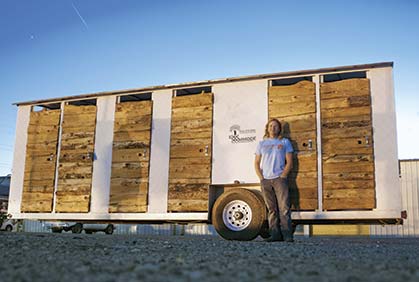 If you find yourself running one of Matt Gunn’s Ultra Adventures races—which include classics like the Bryce Canyon, Zion and Grand Canyon ultras—you’ll not only be surrounded by some of the most amazing scenery in the Western United States, you’ll also be helping to keep those surroundings beautiful.

All of Gunn’s races are “zero-waste” events, which means he and his Ultra Adventures team recycle everything from paper and plastic to uneaten food … and eaten food. Yes, that.

Using his own composting toilets—“Eco Commodes”—made of recycled materials, Gunn (above right) recycles human waste for use as fertilizer for non-produce plants.

“Whenever I go to an event with lots of people and port-a-potties, I have a really twisted way of seeing the situation. I can’t help but think of all the compost that could have been made,” says Gunn. “Human waste is not really ‘waste’ at all, but a valuable resource.”

Gunn was inspired to create his commodes after a humanitarian trip to Haiti in 2010, where he was charged with the task of building self-sustainable schools, including functional and eco-friendly toilets. Upon returning to the States, he began building his own composting toilets for his race events.

“It’s such a simple and natural process to safely transform something so gross into something so useful,” says Gunn.

Arianne Brown is a mother of six young kids. She enjoys running the mountain trails of the Wasatch and beyond. More of her writings can be found on her Facebook page, A Mother’s Write. You can also follow her on Twitter@arimom6 or contact at ariannebrown1@gmail.com.

Why You Should Lease, Not Buy, Your Next Pair of Running Shoes