Although Barbara Macklow calls herself “an average runner,” there’s nothing average about seeing the 96-pound … 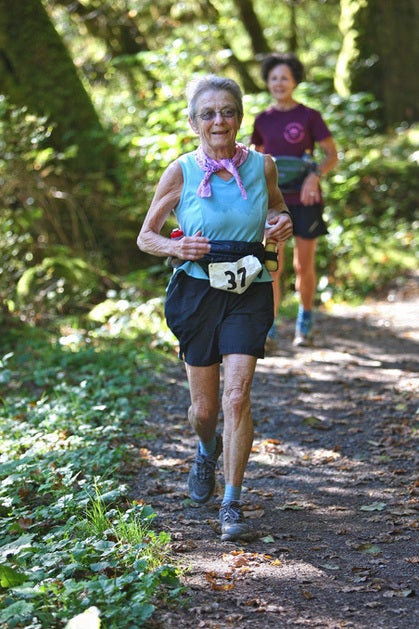 Although Barbara Macklow calls herself “an average runner,” there’s nothing average about seeing the 96-pound great grandmother at the starting line of an ultramarathon. At 77 years old, Macklow, of Bellingham, Washington, is one of only two women in United States history to have finished a trail 100-miler in her 70s. She is the oldest woman to run both the JFK 50-Mile Run in Washington County, Maryland, and the Umstead 100-Mile Endurance Run in Raleigh, North Carolina.

“Running is a part of my life,” says Macklow. “You know, you get up, you brush your teeth, you do what you do. Well, I get up and I go for a run.” But just as inspiring as her level of fitness at 77 is the fact that she didn’t discover running until she was 51 years old.

Standing five feet tall, Macklow has never been one to shrink from a challenge. She wanted a big family and had five children. For a couple years in the 1970s, her family lived aboard a 40-foot boat, while they sailed from their home in Connecticut to the Bahamas. Though two of her children were born with a debilitating muscular disease, Macklow insisted on teaching them to be independent and undeterred by circumstance. “She showed us how to be strong,” says her daughter, Karen, of their upbringing.

In 1975, shortly after the family sold their boat and settled in Washington State, Macklow’s 11-year-old daughter was swept downriver on a family rafting trip and drowned. Macklow was 41 years old. She and her husband split soon after.

For Macklow, the next 10 years were not unlike a 100-mile race—mentally taxing and physically exhausting. Raising four kids alone on a shoestring budget, she worked the overnight shift as an ER nurse and kept animals on their five-acre farm. The demands of managing work, family and farm afforded a very slow recovery process from her daughter’s death.

When her youngest child left for college in 1985, Macklow found herself with more free time than she’d had in decades. She started cycling for exercise, then one day decided to go for a run. “It was a fitness thing,” she says of her motivation to get moving. “And I didn’t like it a whole lot at first.”

Still reeling from the accumulated stress of those years, running became a reprieve from her grief—a sort of balm for her soul. “When you’re stressing your body and pushing yourself physically, especially in a beautiful environment, it gives peace of mind,” she says. “Running long distances is like therapy.”

Soon she was hooked. Ten years later, Macklow entered her first foot race, a local four-miler, which opened the door to longer races. At 62, she ran her first marathon, in 4:36.

Then in 1999, at 65, Macklow entered her first trail race, the Chuckanut Mountain 50K in Bellingham, Washington, and a love for trail running was born. “Barb is so adept at trails,” says Macklow’s long-time training partner, 68-year-old Vicki Griffiths. “She has no fear … if she falls, it’s no big deal.”

“After Chuckanut, I started cutting out road races,” Macklow says. The trails beckoned her back to Chuckanut every spring and to the Baker Lake 50K Trail Run every fall. Then, after running a few 50Ks she started to wonder what it would be like to run farther.

In 2006, Macklow and Griffiths, at ages 72 and 63 respectively, finished the Pacific Crest Trail 50-Mile Trail Run together, in 13:56, just four minutes under the cutoff time. The next year Macklow ran the JFK 50 in 12:37, running cycles of 18 minutes with two-minute walk breaks.

“All this ultrarunning is Barb’s fault,” says Griffiths. “When Barb says, `You know you could do this,’ what am I supposed to say to someone nine years older than I?”

In 2009, both Macklow and Griffiths entered the Umstead 100-Mile Endurance Run. Race director, Blake Norwood, was impressed by Macklow’s tenacity even before the race, as her registration sat on the waitlist. “She’s got a lot of heart, and a lot of determination,” he says of their pre-race conversations.

Meanwhile, she pored over race reports and tweaked her 50-mile training plan for a 100-miler. By the time she was bumped into the registration pool and had flown to North Carolina, she was ready.

“You run the first 50 miles with your legs, and the second 50 with your brain,” she says. “But the first hour and the last hour are the hardest.”

At Umstead, runners must begin their final 12.5-mile loop by 26 hours to avoid getting pulled from the race. Macklow started her final lap with 20 minutes to spare. “She was obviously tired, but she was so determined,” recalls Norwood. “When I saw her I had every confidence she was going to make it.” After 29 hours 46 minutes 11 seconds, a worn but “incredibly happy” Macklow earned her 100-mile finisher belt buckle.

Last year, she ran 75 miles in 20 hours at the Rocky Raccoon 100-Mile Endurance Trail Run, in Huntsville, Texas, but feeling ill and dropping out. Macklow, who has never put much stock in what she can’t do, was not devastated by the DNF. “It’s not a matter of life and death. I’ve already had the greatest loss — finishing a race is not that vital,” she says.

Macklow plans to finish Umstead next year. If she does, she will be the oldest woman in the United States to race a 100-miler. “If you really want to do something, the time is now,” she says. “That’s where I am with my running. I’m going to keep going until I’m physically unable to do it.”