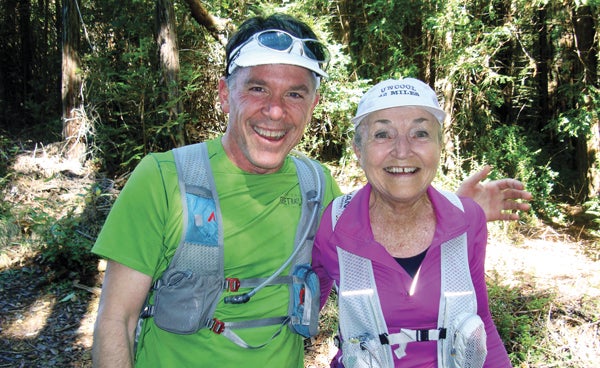 When Eldrith Gosney, a longtime ultrarunner from the San Francisco Bay Area, turned 70 in 2011, she set a goal to run a 100-miler. How unusual is that goal for a female septuagenarian? Consider that of the 5,738 individuals who completed a 100-mile running event in North America in 2012, only 13 were 70 or older, and all were male, according to RealEndurance.com’s database of ultra results. Only two other women in their 70s are on record for finishing 100-milers: Helen Klein, 75, in 1998; and Barbara Macklow, 74, in 2009.

Gosney ran a handful of 100s when she was younger, including Western States in 1990, on top of some 135 ultras ranging from 50K to 100K since she took up running at age 40. In spite of her experience, however, getting through another 100 filled her with doubt due to the chronic back pain she endures. She also laments how her pace has slowed and wondered if she could make the cut-off times at aid stations.

She’d rather train for ultras and risk a DNF, however, than quit for good. “I wanted to prove to myself that I’m still strong and active, and, besides, I absolutely love being outside on the trails,” says Gosney, who lives about 50 miles north of San Francisco in Fairfield.

In August 2011, she embarked on the Headlands Hundred event and made it through more than 29 hours. But a couple of miles from the finish, while running among rocky outcroppings and cresting a ridge overlooking the bay, she suddenly leaned over too far and fell into a manzanita bush.

Stuck like a turtle on its back, unable to roll over, she told her pacer not to help because she didn’t want to risk disqualification for accepting assistance. Meanwhile, a hiker came along, she recalls with a smile, and looked appalled to see a diminutive, gray-haired woman flailing in the bushes while another man—her pacer, Jeffery Rogers—observed but didn’t help. The hiker fished in his pocket for something to make Gosney feel better and apologetically handed her a cough drop, “as though the cough drop would make up for my fall and for Jeffery not helping me,” Gosney says with a laugh. “He meant well.”

But only one thing could make her feel better: getting back on her feet and finishing. As Rogers recalls, the hiker had a look of disbelief when she got up and started running again. Says Rogers, “She’s tough! She ran to those stairs [on the hillside], down all the technical stuff and really wanted to get in under 30 hours.”

“I don’t plan to give up ultras; I plan to keep going,” she says. “If I can’t make the cutoffs anymore, then that’ll automatically cancel me from some of the races.”

Gosney averages about 40 miles a week, and in peak training increases her weekly mileage to near 70. In June, she fell from a ladder and broke a metatarsal bone, which put her in an orthopedic boot for eight weeks. She cross-trained on a stationary bike while she couldn’t run and returned to the trails in early August, her hopes pinned on the September 14 Headlands Hundred. In spite of the injury and lingering back and knee pain, Gosney started the race and made it 50 of the 100 miles. Now she’s setting her sights on at least one more ultra this season.

“Whenever I see her out on the trails, she inspires me,” says trail runner Marilyn Toscano of Modesto, California. “We all want to be like her when we grow up.”

Gosney seems genuinely embarrassed when people compliment her running, and cringes when they call her “an inspiration.” She says she views younger, speedier runners as more inspiring. Yet, as she runs steadily with a smile and her silver hair braided or flowing past her shoulders, it’s undeniable that she gives hope to trail runners of all ages—hope that running doesn’t have to taper off in retirement.

Gosney took up running more than three decades ago to combat depression, and it’s still essential to her well-being. “It keeps me well balanced,” she says.

“If I had quit when my doctors told me to, I wouldn’t have been running the last 13 or 14 years,” Gosney adds. “One doctor told me I should only walk, and it should never be more than a mile and only be on a treadmill. … The truth is I’m in pain a lot of the time, but I have a high pain threshold, I guess. I’ve had sciatic problems for years, and it’s so painful sometimes that I can hardly get up off the couch. Sitting is the worst enemy. It’s much better to stay moving.”

She also retains a youthful pleasure with her running. “My mom never would let us get dirty. We were poor and didn’t have much in the way of clothes, so we took care of what we had,” she recalls. “So now if I can run and it’s pouring rain and I’m sloshed with mud, and I have the wind hit me with force, I really like that.”

Gosney is famous among Northern California trail runners not just for her age and litany of races, but also for her smile. Her friend Stan Jensen, a longtime ultrarunner and founder of Run100s.com, says that when she comes through aid stations, “She’s always looking tired, dusty and often bloody, yet always with that wonderful smile.”

Jensen met her in 1993 at his first ultra, the American River 50, where “she beat me by about 15 minutes, although she was 11 years older. I remember being passed by an older woman and wondered what her secret was.”

The act of smiling is part of her secret. Gosney says it’s a coping mechanism: “They say that if you smile, things aren’t as bad as you might think they are—somehow, smiling just makes things better.”

Gosney gives back to her friends in the ultrarunning community by hosting a small, by-invitation-only 50K each March on the same day as the Way Too Cool 50K. Hers is called “The Uncool 50K.”

She tends to run the same races repeatedly, because she prefers to stay within driving distance of her house. She ran the American River 50-miler 20 times, for example.

Asked if she ever feels burned out from repeating the same segments on familiar trails, she says, “Once in a while I do, but by the end of the race, I’m so glad I did it that I often break down and cry. I’m just grateful I can still get to the finish line.”