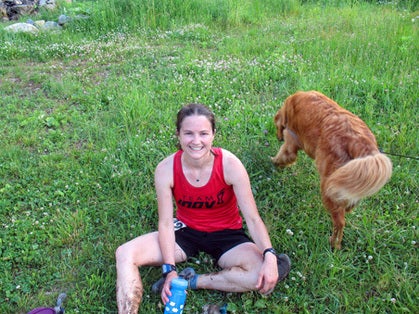 Instead of retiring for some much-deserved sleep, Wilcox celebrated her fine finish by taking off her shoes and running garb, wrapping herself in a towel and plunking down on a camp chair to soak her blistered feet. Despite the threatening weather, she stayed up until 7:30 in the morning, cheering finishers across the line. “Supporting my friends keeps my energy level high,” she says.

Wilcox is known in the Vermont trail-running community not just for clocking faster and faster race times, but for being an ever-present cheerleader. “After placing third at the 2009 Peak Ultra Run 50-miler in Pittsfield, she went back out on the course—wearing a sun dress and sandals—to pace at least four different runners to the finish,” says friend Todd Archambault.

Such exuberance makes it hard to believe that just six years ago Wilcox, then 24, was fighting for her life. “An X-ray showed a lump the size of a large orange between my lungs. That afternoon I was in the O.R. for a biopsy.” It was non-Hodgkins Lymphoma, a strain of cancer that attacks lymphocytes present in the body’s immune system.

Certain smells, like lavender, repulsed her, and she suffered from severe motion sickness. “Since I couldn’t ride elevators, my `hill training’ began with regular trips up four flights of stairs to the oncology unit,” she says. “After my chemotherapy ended, I needed a goal, so decided to run a marathon because I had never done one,” says Wilcox, who, in her pre-cancer life, had never run more than six miles. She finished the Vermont City Marathon in a respectable 4:27:19. “I hated every step.”

She abandoned running until 2007 when Chris Wilkins, Wilcox’s coworker at Ben & Jerry’s (where she was the assistant gift-shop manager), dared her to better him in a marathon, a challenge he mistakenly assumed she’d shy away from. Instead, she beat him handily at the Disney and Marine Corp marathons.

Her interest in running renewed, Wilcox began attending Williston’s Tuesday Night Trail Running Series at the Catamount Outdoor Family Center. “I enjoy running on roots and rocks and on trails am less concerned about screwing up my knees and feet.”

Wilcox’s outgoing personality quickly earned her a reputation as one of the weekly trail-running gatherings’ more colorful characters. “I was overwhelmed when I first met her,” says Vermont ultrarunner Aliza LaPierre of the woman many call “feisty and intense.” “But she’s a wonderful individual and has become a valuable asset to the trail-running community.”

To call her “social” is an understatement. Conversations during long runs bounce from topic to topic. The subject of ex-boyfriends gets her particularly amped up, and she’ll drop the hammer and inadvertently leave her training partners behind.

“On her 31st birthday we ran 31 miles, during which she described her criteria for the ideal man,” says Jack Pilla, 52, and winner of the 2009 Vermont 100. “But she’ll have a tough time finding a guy to keep up with her on the trails, which is one of her criteria!”

In 2008, Wilcox placed sixth at her first ultra, the Jay Peak Mountain Marathon 50K, and the following year, ticked off 10 events, scoring wins at the Wapack and Back 50-Miler in Ashburnham, Massachusetts, Great Adirondack 11.5-mile Trail Race in Keene Valley, New York, and Mont Tremblant Ultimate XC 56K in Quebec, Canada. This year, Wilcox bettered her time at the Vermont 100 by almost an hour and the Ultimate XC by 30 minutes.

“Serena has an uncanny ability to suffer and recover,” says fellow trail runner Nick Yardley. “She is not afraid to give it her all and get a little bruised in the process.”

Now cancer free for six years, working as a sales rep for Peregrine Outfitters and preparing for a full race roster next year, Wilcox has not wavered from her priorities. “Sharing my love and passion for the outdoors and paying attention to my physical well-being are paramount,” she says.