To Rickey Gates, running should be fun—so he keeps it that way 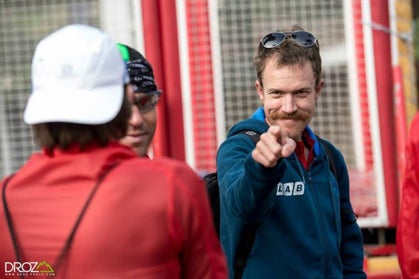 Rickey Gates wants YOU to have fun on the run. Droz Photo

A couple days after The North Face Endurance Challenge 50 Mile Championships in the hills outside San Francisco, I was standing in the U.N. Plaza off Market Street—the “epicenter o’ weird” in this city, according to one of its resident speed demons, Rickey Gates.

Indeed, I had never felt less out of place wearing split shorts in a bustling business center as Gates, then 32, rolled up on his bicycle, his trademark red mustache peeking out from under a winter cap he had pulled far over his head. He was going to give me a running tour of his most recent home base. Joining us was Matias Saari, the Fairbanks-based winner of the 2009 Mount Marathon Race in Seward, Alaska.

As I wondered aloud how far we were going, Gates shrugged. At this point I noticed Saari was donning work pants along with his Brooks Pure Grits, with no apparent plan to ditch them for shorts during the run (he didn’t). Between my outfit and my obsession over the day’s distance, I was acting like the most “serious” runner in the group—yet I was the slowest by a good deal.

What followed was an ambling two-hour running tour of San Francisco, through the Mission neighborhood (“This is where the hipsters live,” Gates snarked), up the massive climb to Twin Peaks (“You might have to power hike”), and through the hidden singletrack of the Mount Sutro Open Space Reserve. We passed Haight Street and ran the Panhandle of Golden Gate Park, traced the Bay to Breakers Route and circumvented Alamo Square Park (“Full House house,” Gates said, pointing). We stopped at a café and enjoyed coffee and chocolate croissants before running the last miles back.

For a couple of hours wandering with Gates, my earlier fixation with the mileage I would enter into my running log that day melted away as I became immersed in the act of exploring a great American city—in being fulfilled by the act of the run, the journey, rather than being preoccupied with finishing that journey.

The glimpse I got of Gates’ training didn’t fit my preconceived idea of “serious” running , and yet my only previous sighting of the Salomon-sponsored athlete at the previous weekend’s Endurance Challenge race had been as he returned on an out-and-back section, several miles ahead of me. His strong finish was the latest in a long and successful racing resume: in 2013, he was second and under the old course record in Alaska’s grueling Mount Marathon Race, and in 2012 he was second only to Kilian Jornet (and won the prize money after Jornet cut several switchbacks) at the hyper-competitive Speedgoat 50K in Utah, where he also placed fourth this year. Whatever Gates was doing, it was working.

So what exactly was he doing?

We’ve come to know Gates as a modern-day mountain-running Jack Kerouac, loping into the hills and canyons from wherever his BMW F650 Dakar motorcycle has most recently carried him—as far away as Alaska—all the while writing, taking photographs and pining eloquently on his passion for the mountains and exploration.

“You take the simplest sport—all you need is a pair of shoes,” he says in the Salomon-produced documentary On the Road, against an image of him popping out of a tent in Colorado and striding up the nearest mountain. “And you’re off and running. The adventures are really endless at that point.”

“Traveling and trail running, for me, kind of grew together,” he continues in the video. “They’re very similar things.”

As mountain, trail and ultra running become infused with an increasing amount of road and track talent, so too do they become more infused with phrases like “track work,” “intervals” and “tempo runs.” Incorporating structured suffering into training will breed faster athletes. But, as Gates would impart on our run, if you do them wrong, they will also breed burnout, apathy and distaste for what should be first and foremost a fun undertaking.

“I definitely do [intervals],” Gates is quick to point out, warding off the notion that his training is completely devoid of structure. “If you want to get to the higher levels of the sport it’s necessary. But it doesn’t have to be out at a track with a stopwatch and the distances all measured out. It can be fun.”

“[My workouts] are pretty simple,” he continues. “I just go out and run fast off and on for an hour. You go to a place you know well and where you know it’s a quarter mile or so, then do that a few times. Just a little changing of the tempo, it mixes things up and helps you run faster.”

But he boils down his approach to one simple rule:

“I have to maintain a love for the sport,” he says. “So I try not to let my desire for training get in the way of living my life. I always choose the option that’s more fun.”

Gates says that he does not have a weekly mileage target, but adds that having been a runner for some 20 years better enables him to train at a high level off of feel alone.

“I wouldn’t recommend [training by feel] to someone newer to running who really wants to do well in a specific race—an uphill race, a mountain race or a 50-miler,” he says. “There’s still discipline involved to run when you don’t feel like it sometimes.

“If I have an important race coming up, I’ll identify what I need to do specifically to get ready for it for a few weeks,” he continues. “That’s what it takes to do well.”

While Gates doesn’t subscribe to a hard-nosed training plan, he identifies a few ingredients all successful runners need. “Intervals, distance days and rest days are all in there,” he says. “I kind of cook the same way. You need your salt and your sugar and you know they all need to go in there, so you add them in taste it and have a pretty good idea.

“But some people really prefer to measure the ingredients out specifically, based on a recipe,” he continues. “And that works for them. I certainly don’t scoff at anyone who has a training cycle or as a coach or runs intervals on a track.”

Changing scenery is a major part of how Gates avoids running burnout. He often travels the country (and beyond) on his Dakar, occasionally sitting there for 12 hours at a time—a feat he contends requires as much endurance as running six hours—riding to the desert in Utah or north of the Arctic Circle in Alaska.

“The motorcycle is a lot like running,” Gates says. “You’re covering land in a vehicle, whether that’s your body or a motorcycle, and covering earth like that is amazing. To be in a different spot in the evening than you were that morning … to me, that’s what it’s all about.”

You can check out some of Rickey’s writing for Trail Runner here.