Editor’s Note: This piece originally appeared at Camp Fancy Free and was our top pick among entries into the June Trail Runner Blog Symposium: Write about someone awesome you’ve met through trail running. To see other submissions, check out our June Symposium Highlights.

I was working at a small health food store in northwest Montana. It was a small town with a huge tourist population. Whitefish was its name. I had moved there by chance, on a train, to be with a significant other in a place where I could begin to learn the ins and outs of market farming, organic gardening.

On a cold day in late March, I arrived in town via Amtrak with two bags to my name. I had a place to crash for a week or so—and, honestly, after that, no plans. I had a pending work/trade at Purple Frog Gardens, which was still weeks away, and if you have never spent time in northwest Montana … April is chilly.

After a few weeks of living out in the woods, I moved into a tool shed on Purple Frog. And even though it was overwhelming with the amount of people that I then considered quasi-roommates (they occupied other tool sheds, cabins, vans and Airstreams around the property), it was an amazing learning experience—in and out of the field.

From that moment, when I moved onto the farm, which was located just a few short miles outside of downtown Whitefish, I quickly integrated into the community. I was expecting to spend about six months there, and all of the sudden two years passed by. Summers that passed too quickly offered incredible playgrounds, from the parks to the lakes to the local trails.

It was just about then that Rebecca moved there. At first we didn’t really connect. But I could tell this was a girl I wanted to befriend, even though I didn’t know why at first. It soon became evident that her view of life would be, should be, adopted by more people, and her enthusiasm for pleasure seeking would be highly addictive. 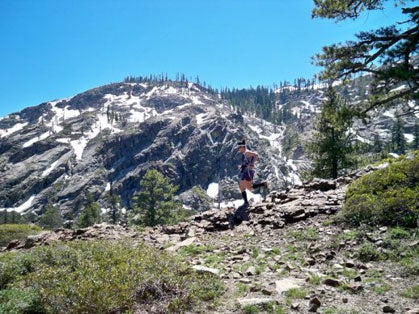 Leading our run in the Sierra Buttes.

I had been spending the winter at the local gym to get some running in. I also had just started getting into cross-country and skate skiing. Once we got past the point of mere introductions, Rebecca and I started to really become friends. I didn’t have a lot of friends outside of my coupledom at the time, and none that were really into the same things. So this was the first time when I felt stronger in my independence.

Rebecca. I remember at work her commenting—always slightly—when I mentioned how often or how many miles I was running. It was nothing major though. I was just regularly and happily, a few miles here and there. I honestly had no hopes or ambitions at that point of taking it further. Anyway, we each were open to a running partner, or maybe just someone to play with.

She is the first and still the only running partner I have had. Somehow, without pressure,  without even suggestion, just mere ambition or desire, we progressed to epic runs through Glacier National Park. Into the Bob Marshall Wilderness. Things I hadn’t even considered before were now there, laid in front me. In the sort of detached way she has that somehow instills confidence … “Yes, you can. You are already here. You are already doing it.” It was that same confidence that led me to my first trail marathon in Ashland, Oregon, later that year. 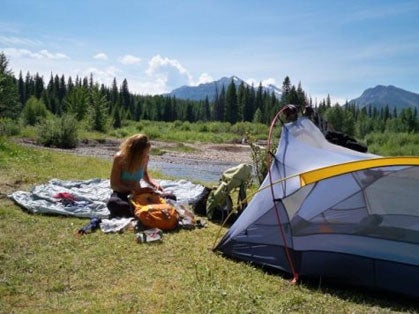 The morning after a great 14-mile run into “The Bob.”

Most of our time we just played. Go to the closest trail. Hike up Big Mountain at 5 a.m. just to run down it by the time we had to be at work.  We would use every spare minute to be on a mountain, on a trail, river or lake.

It was at a time when I needed to relearn how to play. Truly play. Not train. Not struggle or even try. Just to think of the best way to let all the other bullshit fall away. So we did.  A few short months later and the miles started to add up. The hour-long, after-work runs turned into three-hour outings. Our weekdays were spent figuring out what awe-inspiring loop we would get into on the weekends.

Soon after, she and I set off, moving into her Blazer with no plans in sight. Me sans relationship and most of my belongings. She, ready for her next road trip with a companion. For at least four months we played. Stopping at trails, to run into hot springs, to Mount Rainier. To run, just to run, when camped in beautiful Northwest forest through the Redwoods, or the wild desert of Joshua Tree. We ran through hail and snow. We ran until dusk and then hitchhiked back to the car, filled with ecstatic laughter at the 20-something miles we had covered over two passes. Laughter at the spiraling eagles and awesome photo shoots. Laughter at the sun and the beauty we had just witnessed. Laughter that there is nothing else that could have made that day better spent. 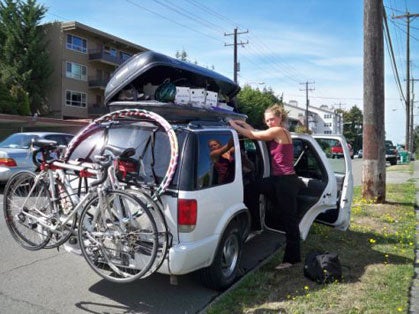 The White Knight—our home for about four months.

We played. We spent our time wisely. Sometimes it takes a friend to relearn that.

An explorer by trade, Kali Kirkendall can frequently be found running over mountains, on the open road and in foreign lands. She likes to stretch her mind and body, as a yoga instructor, as a writer, as a seeker. She is not scared of anything except the dark and believes strongly in the beauty and simplicity of outdoor living. You can read about her adventures at www.campfancyfree.com or find her on Facebook at https://www.facebook.com/kali.kirkendall.1