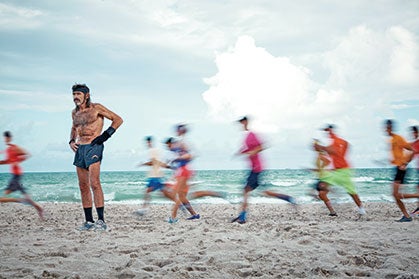 A hunched figure plods down the beach. Shirtless, he wears just a pair of black running shorts, a black sweatband and gray New Balance shoes. A mane of black hair tumbles down his back. His beard is gray, save for a single, dark streak. Biceps bulge against wrinkled-leather skin, giving him the appearance of some ancient rock star—which, in a way, he is.

He rounds the Fifth Street lifeguard stand and heads for the open arms of those waiting to meet him: fellow runners, lifeguards, friends. A cheer erupts as he jogs into view. “Forty more years! Forty more years!”

It is January 1, 2015, the 40th anniversary of the start of Robert “Raven” Kraft’s 14,722-day, nearly 118,000-mile running streak on Miami’s South Beach. Now 64, the Raven has become a local legend. But his renown comes from more than just a world record. Forty years ago, Kraft was a broke—and broken—songwriter. Today he is the proud father of a community of “Raven Runners,” who have traveled from as far as France to join him on his laps around the Florida beach.

Kraft grew up in Miami, where his high-school baseball team nicknamed him “The Raven” because of his tendency to wear all black. As a teenager, he discovered rock and country music, and, in 1965, at age 14, took to writing songs. Music became his passion, and his life’s goal was to become a successful songwriter.

In February 1970, he made a pilgrimage to Nashville, Tennessee, to watch Johnny Cash record a show at the Grand Ole Opry. He stayed for several weeks, and would hang around after each night’s show to shoot the breeze with his idol and show him some lyric sheets. One night, Kraft says, Cash handed the sheets to a friend and fellow musician who said he might be able to help Kraft’s career. The friend slipped Kraft’s lyrics into his pocket without a word. A few days later, Kraft went home to Miami.

In the early fall of 1970, several months after returning from Nashville, Kraft says he heard a familiar song on the radio. His lyrics had become someone else’s hit.

“I realize now that the musician was probably high and woke up with the lyrics in his pocket, thinking he had written them himself,” Kraft explains now, more than four decades removed, “but it took me 20 years to realize that. [At the time] I was devastated and incredibly angry. I felt like I had been robbed.” (Now, 45 years later, says Kraft, “The person who stole my lyrics is still alive, and I don’t want to tarnish his success as a musician by saying who it was.”) 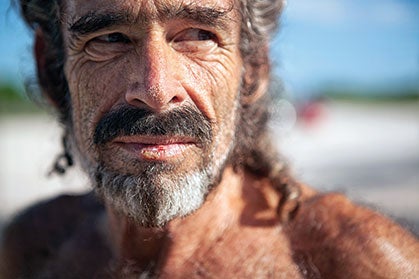 For the next two years, Kraft worked odd jobs in construction and restaurants, harboring a deep resentment of the man who had stolen his song. In search of peace, he would hang out on the beach. There, in 1972, he met several fighters from Miami’s famous 5th Street Gym, where Muhammad Ali had trained. They had come to the beach to do their “road work,” and invited Kraft to join.

The first two-mile run exhausted him. But his mind—for the first time after months of anger—was clear and calm. He forced himself to continue running, measuring distance by the garbage cans spaced evenly along the shore and gaining confidence from each small improvement.

“It was a way to discipline myself,” he says, “and a way to dig myself out of this angry, self-destructive hole I was falling into.”

His daily mileage increased from two miles to four, then five, then seven, until, by the end of 1974, he was running up to eight miles several days a week and was widely known as the fastest runner on the beach.

On New Year’s Eve, Kraft made a resolution: he would run eight miles every day for the entirety of 1975. He ran through pneumonia, food poisoning and a hurricane. He impaled his foot on a nail, but never gave up. By the end of the year, he “was in the best shape of my life and mentally so much happier. By that point running was just what I did. I saw no reason to stop.” 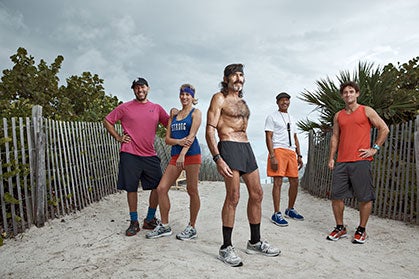 Kraft has held (and quit) numerous jobs over the years. He has sandblasted trains, loaded trucks, washed dishes, bussed tables, laid brick, worked demolition and sat at security desks. Running, he decided, was one thing he was not gong to quit.

In the early 1970s, a local reporter wrote a story about the crazy man running every day on the beach, and interest in Kraft’s story spread. In 1977, a stranger showed up to run with the “The Raven.” The next one came in 1981. Over the following decade, other news channels picked up the story. The early 1990s saw one new runner a month; in the middle of the decade, participation increased to one runner a week. By the turn of the century, Kraft was accompanied by at least one runner every day. It has now been nearly 10 years since he has run alone. To date, at least 2,341 people from 81 countries and every state in the U.S. have become members of the “Raven Club” by completing at least one of his eight-mile runs.

Mary Beth Koeth found Kraft five years ago, when she came to Miami for school. “South Beach is a difficult place to make significant friendships, because the clubbing scene is so predominant,” she says, “but Raven made it feel like home. I never would have stayed here this long if it weren’t for him.” Koeth has run 187 days with Kraft.

Peter Carmen commutes 61 miles most days to run with Kraft. He has run 386 days with him and says that Kraft is a role model to him and many others: “If someone can run every day for over 40 years, everybody should be able to do it a few days a week.” 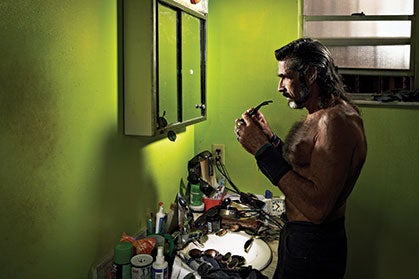 Kraft tries on a pair of sunglasses his girlfriend, Priscilla, found on the beach. The pile is one of the many collections filling his apartment. Photo by Mary Beth Koeth

Raven Runners meet every day at 5 p.m. at the Fifth Street lifeguard stand. It’s a standing invitation and the time never changes; no phone calls or Facebook groups are necessary. The run starts with roll call. Kraft, who bestows every runner with a nickname, calls each one out with a special chant. Koeth is Yellow Rose. Carmen is Close Call. Other regulars include Gringo, Taxman, Dizzy, Ozark, Sleaze Buster and Chocolate Chip.

The group then sets off close to the shore, where the sand is hard packed and easier to tackle. Lifeguards, who see Kraft pass their stations every day, wave as the group runs by. The pace is slow and runners swap stories, joke and chat about anything from finance and politics to music and sports. Everyone relaxes, letting the days’ stress recede with the setting sun.

The camaraderie extends beyond the beach: Kraft memorizes everyone’s birthday, hosts his own birthday bash and puts on a yearly awards ceremony to honor runners’ achievements. “Right Reverend Robert Running Raven,” Kraft’s ordained-minister alter ego, has married several Raven Runner couples. His girlfriend, Priscilla, is a Raven Runner, too. He met her when she was teaching a photography class on the beach. Her nickname is Miracle.

Though fellow runners gush about Kraft’s selflessness, he insists he gets as much from them as they do from him. “I started the run for myself,” he says. “Now I do it for other people. I love bringing people together and inspiring them to become stronger and healthier. It has become my mission and my motivation.”

Kraft retired from security work in the 1990s. When asked what he does when he is not running, he describes his daily workout: 60 pullups, 100 pushups and 10 to 15 minutes of weightlifting. He used to include a three-and-a-half-mile swim as well, before his bad back got in the way.

The rest of his time is occupied by listening to baseball games on the radio, watching old movies and writing and playing music. “I’m still waiting for my big break,” he says of his dream to become a professional musician, which he has yet to give up on. Kraft’s voice, a rumbling bass, is reminiscent of Johnny Cash himself, and his songs collectively tell the story of a 40-year journey from anger to peace—and youth to adulthood—through running. He has an album, “Unstoppable,” on iTunes, and continues to write new songs and send them to producers.

He also keeps meticulous records of every Raven Run, a process that takes up a significant portion of the day. He can report how many runs any given Raven Runner has completed—even if it is just one—how many runners were present on any given day in the last three decades, where every runner lives and environmental statistics like big storms, unusual highs or lows and wind speeds.

In addition to collecting numbers, Kraft collects cassette tapes, records, CDs, baseball memorabilia, old magazines and refuse he finds on the beach—toys, action figures, shells, discarded sunscreen bottles. He is particularly enamored of objects that have been broken or put out of commission. As he puts it, “I’ve collected my old shoes that ran out of miles, used pens that ran out of ink and watches that ran out of time.” 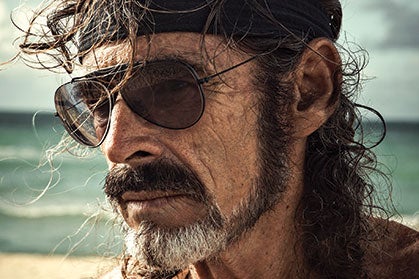 Every day, Kraft walks the same route from his house to the beach. If the gate outside his house is open, he walks around the back, to a different exit. When he runs past the 35th Street lifeguard stand, he goes out of his way to touch it. He was diagnosed with obsessive-compulsive disorder in 1998 and admits that the condition was probably what led to his streak of daily runs. Yet he counts himself lucky, describing his running as a positive and healthy obsession.

“I could take medication,” he says, “but this is who I am and I am happy with that.”

He doesn’t own a car and doesn’t like to travel or visit new places. On the other hand, he has seen every South Beach sunset in the last 40 years.

Well into his 60s, Kraft is beginning to feel the effects of his 40-year streak. He has spinal stenosis, a genetic disease that involves nerve damage along the spinal cord and causes leg and lower-back pain. He also has arthritis and nerve damage in his feet. “I’m fighting it every day,” he says. “I wake up and can hardly walk, and I think, ‘How the heck am I going to run eight miles today?’ The first few miles are pretty ugly, but by mile three or four I’m warmed up and start to feel good. You just have to be patient with me.” 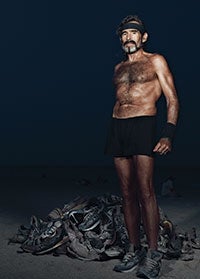 Kraft has saved every single pair of running shoes he has owned since the streak began—all 114 pairs of them. Photo by Mary Beth Koeth

Raven By the Numbers

2,341 number of people who have run with Raven

80 age of the oldest person to complete the Raven run

6 age of the youngest person to complete the Raven run

1,818 most runs completed by a Raven Runner

200 the most consecutive runs completed by a Raven Runner

114 pairs of shoes that Raven has gone through since 1975

2,300 the most miles Raven has put on a single pair of shoes

103 the temperature on the hottest day Raven has ever run, in July 1985

37 the temperature on the coldest day Raven has ever run, in January 2010

2 the number of times Raven has run alone since 1999

7 the number of hurricanes that Raven has run through

86 the wind speed, in miles per hour, that Raven run through during Hurricane Irene on December 15, 1999

Ariella Ginzler is an editorial intern at Trail Runner. This article originally appeared in our July 2015 issue.