Anne Trygstad and her affair with the Bridger Ridge Run 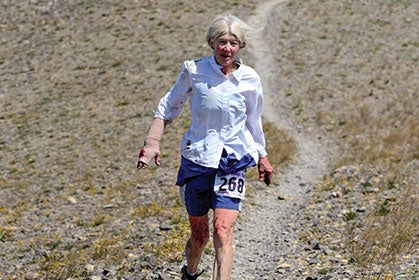 Anne Trygstad at the Bridger Ridge Run. where she ran 13 miles with a compound arm fracture. Photo by Stuart Jennings.

A t 72 years old, Anne Trygstad has become a legend on the high-mountain trails of southwest Montana. With her signature white braid trailing behind her, Trygstad runs the rocky, technical terrain with patience and unyielding determination. She may be best known for her 19 finishes at the Bridger Ridge Run—a technical, exposed 20-mile run with 6,800 feet of elevation gain, and almost 10,000 feet of loss.

Trygstad has seen the race evolve over 30 years, from a community event where, she says, “you threw a few gum drops and lemon drops in your pocket, and chatted along the way,” to a competitive, nationally known race. For the most part Trygstad has remained injury free, but several years ago during the race, she “wasn’t paying attention,” and stumbled off the edge of a rocky section, compound fracturing her arm. With 13 miles to the finish line, she ran through the pain and finished first in her age group, and later had 11 pins inserted into her wrist.

A broken arm isn’t the only hardship Trygstad has faced. Fourteen years ago, her son Hans Saari fell to his death while skiing a steep couloir near Chamonix, France. Then, eight years ago, her husband, George Saari, suffered a heart attack while skiing in Yellowstone National Park and passed away. Despite those heartbreaks, she remains poised, almost stoic. Whether she’s running, riding her Icelandic horses or playing with her sheep dog on her land outside of Bozeman, Trygstad exhibits a rare resilience that resonates on and off the trail. “With running and with life in general, you can’t quit,” she says, “If you enjoy something, keep doing it.”
Q & A

I was never a runner. When I was 35 I watched people run the Seattle Marathon, and they looked exhausted. But I thought if they look that bad and still wanted to run, there must be something to it.

In the clouds:
I trail run because I just love being up in the mountains, especially above treeline.

Training regimen:
I don’t really have one. I ski, run and walk to stay in shape. Running is just a part of my life. But I make sure I have quality miles when I train: either up, down or long distance.

Minimal fuel:
I like to travel as light as possible. I carry a couple of water bottles and five or six gel packets, that’s all.

Advice for the long run:
People can take training and racing too seriously. Be committed to finishing and just enjoy it.