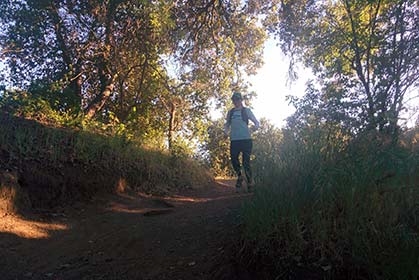 A week after running California’s Fort Ordnance 100K on January 31, Christina Condon huddled beneath a pile of blankets. She had a headache and could hardly keep her eyes open, and her joints were swollen, making every movement painful.

It wasn’t just standard race fatigue. Condon has juvenile rheumatoid arthritis (JRA), a condition that causes joint pain and swelling, and lupus, an autoimmune disease that, in Condon’s case, causes inflammation and pain in the joints.

Condon’s arthritis flare-ups are largely caused by extreme sensitivity to sunlight, specifically ultraviolet-A rays. Fort Ordnance started at 6 a.m., and Condon was under direct sunlight for at least six of the 15 hours she spent on the course, until the sun dipped below the trees. Even as she ran, she knew her head-to-toe SPF clothing and frequent sunscreen applications would not prevent the inevitable side effects.

“The symptoms usually take about a week to kick in,” says Condon, now 27. “It’s like when someone coughs on you and you know that in a few days you are going to have a cold. If I run a long race, I know, in about a week, I’m not going to feel so good.”

That doesn’t stop her from running.

Condon, who grew up in Sunnyvale, California, began having symptoms when she was 5. Her vision deteriorated, and a strange rash broke out all over her body. When she was 6, it was diagnosed as JRA and lupus.

Condon and her family visited a treatment facility at Stanford University. The picture looked bleak: many of the kids suffering from similar conditions had been put on steroids, which seriously limited their mobility. Often they were confined to wheelchairs.

Unwilling to accept the same fate for their daughter, Condon’s parents did some research and discovered that her symptoms worsened with sun exposure. Rather than take medication, Condon simply stayed inside.

Condon’s sister Theresa remembers Christina dressing in four layers of clothing every day, covering herself in thick zinc-oxide creams to prevent sun damage, running between school buildings to minimize exposure and spending her lunch hour inside the classroom.

Her parents chose schools based on how extensive the indoor facilities were, whether covered walkways offered shelter between buildings and how accommodating the teachers were. She took private physical-education classes indoors.

“I was so jealous of my classmates running laps on the track during gym class,” Condon says. “Of course, they probably all hated it, but to me it was a freedom I didn’t have.” 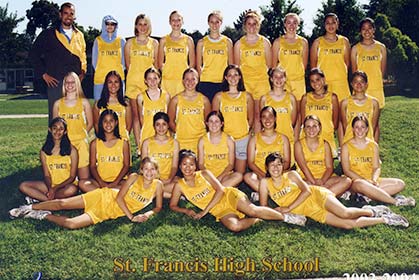 When Condon was in junior high, she received a suit designed by N.A.S.A. Its thin, nylon jersey-knit material shielded the body from 99.95 percent of ultraviolet rays, and an internal cooling pack kept body temperature steady. It was funded by a grant from IBM and a donation from the Hypohidrotic Ectodermal Dysplasia (HED) and Related Disorders Foundation, which provides cooling garments to children with HED, a sweat gland deficiency. The garments also work for children who, like Condon, have fully functional sweat glands but are sensitive to ultraviolet rays.

With the suit, Condon was able to join her classmates outside for gym class and vacation in places that would have otherwise been out of the question. In high school, she joined the cross-country team.

“One of my friends encouraged me to do it, but I wasn’t very interested,” she says. “Then a bunch of other friends and teachers told me I shouldn’t do it—that it would be too dangerous—so I kind of had to do it. But I stayed because of the camaraderie, and that was how I fell in love with running.”

Condon’s parents admit that cross-country was not the activity they would have chosen for their daughter, but they jumped on board once she joined. They had always told her she could do anything other kids could, and had never allowed her condition to be an excuse. Besides, as she matured, she would have to learn her own physical limits.

The suit was cumbersome. Though kids were meant to wear it outside, it was not designed for strenuous outdoor exercise. The headpiece consisted of a pair of ski goggles and a face mask, which obstructed Condon’s vision and made it difficult to breathe. Yet she raced all through high school and continued to run during college.

By her late teens, Condon had begun to outgrow the suit, but her passion for running stuck around. Attending California Polytechnic State University in San Luis Obispo, California, she would run in a nearby canyon after class, when the sun was at its lowest point.

“I would go as far as I could and then race the sun back down,” she recalls.

She wanted to run a marathon, but there weren’t enough pre-dawn or twilight hours and, without her suit, she couldn’t train during the day. Still, in 2011, at Theresa’s urging, Condon ran the Rock n’ Roll Las Vegas Nightmare Marathon—one of the few marathons in the country held at night.

Her interest in long-distance races had been piqued, and she joined a trail-running group. Surrounded by runners who had finished 50- and 100-mile races, Condon was inspired and intimidated. Once again, she was convinced she could never accomplish such feats herself. A fellow club member felt differently.

In May, 2013, Condon placed third female in the Armstrong Redwoods 30K, in the woodlands north of the Bay Area. That November, she ran her first 50K—the Spooner’s Cove 50K, in southern California—and placed first female. This year, at Fort Ordnance, she placed fifth female.

Though Condon was initially skeptical of running without her protective suit, she has learned to adapt and accept the physical consequences. She plans most of her training for the early morning or the evening, and runs in the reliable shade of California’s redwoods whenever she can. During races, though, she is at the mercy of the course. Even her several layers of SPF clothing and hourly sunscreen application isn’t entirely effective.

“Sometimes I experience side effects after a race,” she says. “But it makes me happy so it’s worth it.”

>More in People: One woman’s midlife journey to ultrarunning

No, You Don’t Need To “Earn” Your Next Meal