Two years after her boyfriend tried to kill her, Natalie Nicholson is putting her life back together the only way she knows how: by running 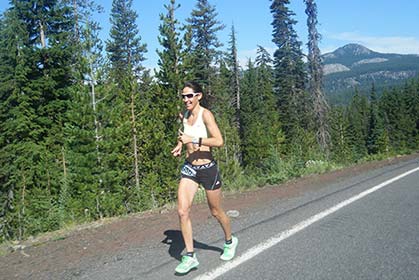 When Natalie Nicholson earns the silver finisher’s buckle she hopes for at this summer’s Leadville Trail 100, it will symbolize a journey much longer and more arduous than a 100-mile mountain run.

In May 2013, Nicholson was living in Bend, Oregon, when her on-again, off-again boyfriend Ted tried to suffocate her with a pillowcase. There had been many examples of abuse, both emotional and physical, over the roughly three years of their relationship, but her attempts to extricate herself had been to no avail.

Nicholson was a marathon runner, personal trainer and physical therapist, and coached a high-school cross-country team. Friends and family had a hard time understanding how a woman like her, seemingly strong in so many ways, had gotten herself into an abusive situation she couldn’t get out of.

“It is easy for people to view you as weak,” Nicholson says now. “But it never starts out that way. The person doesn’t punch you in the face on the first date.”

Once a runner, always a runner

Now 32, Nicholson spent her childhood and young-adult years zig-zagging between Arizona and Oregon. She was born in Phoenix and lived there until she was 9, when her family moved to the suburbs of Portland. She remained there through high school, then returned south for college, at the University of Arizona.

The one constant as she moved from place to place was running. Her parents are both athletic, and, in third grade, Nicholson ran her first 5K, with her dad. She continued to run track and cross-country through junior high and high school, and became competitive enough to attend the state cross-country meet, but an injury prevented her from running competitively in college.

She graduated in 2007, and, with her injuries healed, she soon rediscovered running. In 2009, Oregon called her back. This time, she chose Bend, for its mountains, relatively dry climate and athletic, trail-oriented community. She quickly immersed herself in mountain life, cobbling together several jobs to make ends meet and support her passion for running. That same year, she ran her first marathon, the Pacific Crest Marathon, and placed third female, earning a spot at the Boston Marathon.

Nicholson had been in Bend for about a year and a half when she met Ted, a well-off real estate agent. He endeared himself to her with his apparent vulnerability: he suffered from a reading disability, and told her a sob story about his three kids, whom the courts had prevented him from seeing in nearly three years. Nicholson felt sorry and wanted to fix him, to the point of oblivion. She says he cheated on her, re-gifted her ex-girlfriends’ clothes, called her names and punched her, then told her she had fallen on the floor.

They broke up several times, but Ted always found a way of weaseling his way back into Nicholson’s good graces. At one point, she tried to get a restraining order, but the judge denied it on the basis of insufficient evidence.

“I was too scared to be honest about everything he had done to me,” Nicholson recalls of the proceedings, “so I only spoke about the verbal threats. When you are in an abusive situation, your mind gets completely messed up. After that restraining order was denied, I felt convinced that I was wrong.”

She and Ted wound up back together. Six months later, he made the attempt on her life. She had him charged with attempted murder, suffocation, strangulation, evading the police, unlawful use of a weapon and coercion. (After nearly two years in court, he was convicted on four of those charges.) But even with the law on her side, Nicholson didn’t feel safe in Bend anymore. After he was indicted, Ted broke his house arrest 113 times in 30 days, according to Nicholson, sometimes driving or riding his bicycle by her house.

So, in the late summer of 2013, Natalie packed up her car and drove to Boulder, leaving family, friends and a beloved community behind. She didn’t know a soul in this new city, but she knew she had to get away. 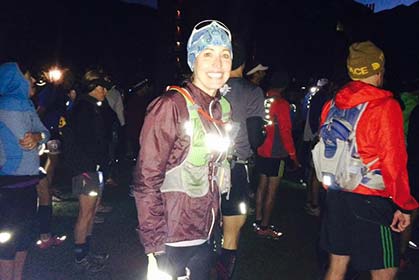 From darkness to light

During her relationship with Ted, Nicholson lost weight and, though she never stopped running entirely, was training with less frequency than before.

“It is hard to be as healthy and fit as you want to be when you are in an abusive situation,” she says, “because you are not feeling good or like yourself at all.”

Nicholson’s energy, and her passion for trail running, surged almost immediately after the relationship ended. In June 2013, two months after the attempt on her life, she competed in the Deschutes Dash triathlon—her first triathlon—and won her age group.

“I think a lot of my strength in doing that came from getting out of that bad relationship,” Nicholson says, pointing to that race as “the start of me rebuilding my life, which will be an ongoing process.”

Since moving to Boulder, her enthusiasm for running has only grown. “It starts with marathons, and then you just wind up going longer and longer distances,” she says. “There’s something that really appeals to me about seeing how far the body can go.”

Nicholson is currently pursuing a nursing degree at the University of Colorado, working at a shoe store and running as if its a second full-time job. Running has, in fact, been the most important part of her recovery. When I spoke to her, Nicholson had recently run Green Mountain, Bear Peak, South Boulder Peak and Eldorado Mountain, the four major peaks of the Boulder range. “When you do a big run like that in a matter of hours, it boosts your self-confidence and helps you to feel good about yourself,” she says. “Some people go to church or talk to therapists. I just run.”

Last summer, she placed fifth female at the Leadville Heavy Half and fourth female at her first ultra, the Über Rock 50K. This summer she will return to Leadville for the main 100-mile event. She hopes to break 25 hours. “I will have to have bone poking out of my flesh to be taken off the course,” she adds.

But even more than a fast time, Nicholson’s goal is to raise awareness of domestic abuse and serve as an uplifting example to the women who suffer from it, often in silence.

“So many women are in situations like this, and don’t know how to get out of them,” she says. “It doesn’t mean you are a weak person, or that you lack something. I am grateful to be alive and am stronger than ever, but it’s been a long, hard and terrifying journey. The scars will never go away, but I can only go up from here.”