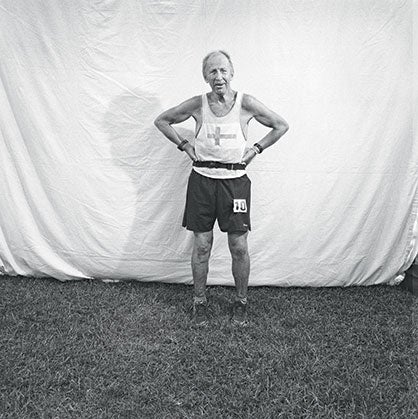 Two trophies erode on a stone fountain in his backyard. It’s a warm spring morning, and the southern California sun beats down as Jussi Hamalainen discusses his 25-year trail-ultrarunning career. The bear-statue trophies look amazingly similar, but one is from Western states 100-Mile Endurance run, which Hamalainen received when he was in his 50s, and the other is from the American river 50-Mile Endurance run 10 years earlier. In each race, Hamalainen, now 67, of Van Nuys, took age-class wins, but his real claim to fame is longevity, finishing all 25 editions of the Angeles Crest 100- Mile Endurance run in Wrightwood, California.

As Hamalainen sits poolside, shaded by an umbrella to protect his fair complexion, he has the look of a runner. He is slim and wears a race T-shirt. On his feet are well-worn trail shoes. His weathered face tells the story of a life spent largely outdoors, focused on running trails. When he isn’t running, he works as a massage therapist, helping all types of athletes remain healthy enough to compete. During his long running career, he has notched well over 50 ultra finishes.“Jussi is a really humble guy,” says Andy Kumeda, a fellow ultra enthusiast. “We all know him as a legend, but he is surprised if anyone recognizes him at a race.”

Hamalainen started running and winning ultramarathons before most people knew what the word meant. Originally from Finland, he travelled to the New York Marathon in 1983, where he met Eino Romppanen, a fellow Fin and running guru. Romppanen invited him to California to run what would be Hamalainen’s first ultra—a 54-mile race that took place on Mulholland Highway and the surrounding trails.

Hamalainen arrived at the race with no idea of what to expect. He was unsure of the race’s actual mileage and had no real training for such an event. All he knew for sure was that he had to leave for the airport by 5 that evening. As a 2:30 marathoner, he was also used to running fast. By about halfway through the race, he found himself in third place. But he was out of water and thirsty, his legs were aching and he did not know how much farther he had to go.

And then around a bend, Hamalainen saw the leaders, reeled in second place and bore down on first-place runner, Jim Pellon. A set of hills loomed in the distance, and as Pellon began a climb, he slowed to a walk. Hamalainen spied an opportunity. “I never walk,” he says, “even if I only run very slowly.” Hamalainen closed the gap and passed Pellon with 15 miles left. The challenges were not over yet, though. Soon other runners began smoking past Hamalainen.

Speaking only Finnish, Hamalainen had not picked up on the fact that there was also a relay race that day. The men passing him at blazing speeds were running just a fraction of the race. Hamalainen did not give up and took the win in just over seven hours.

After breaking the tape, Hamalainen  ran directly into the ocean, swam for a few minutes and headed to the airport. “I flew home with sand and Pacific Ocean all over me,” he says. It was that race, known as the Santa Monica Mountain NDNS Relay and 54-Mile, no longer in existence, that convinced Hamalainen to immigrate to the United States. In Finland he had struggled to run year round because of the harsh winters. As he ran that first ultra, he reveled in the foothills’ beauty, the ocean’s saltiness and the California warmth. Hamalainen was the only member of his family to move to America, but he found friends in running, in particular Jim Pellon, who became a training partner and running companion after their initial competition.

In 1986, at age 40, Hamalainen upped  the ante, running the inaugural Angeles  Crest 100-Mile Endurance Run, one of the toughest trail ultras in the Western United States, with about 1,000 feet more climbing and descending than the vaunted Western States 100. He would continue—not missing  a single Angeles Crest—for the next 24 years and counting, earning the coveted under-24-hour belt buckle a total of 17 times. In 1990 and 1991, Hamalainen took overall Angeles Crest wins. In 1990, as co-race-director Hal Winton awarded him a trophy for his 19:31 finish, Hamalainen’s long-time crew leader, Pauli Majamaki, handed a puzzled Winton a leathery-looking piece of hide—it turned out to be the calloused heel of Jussi’s foot, which had fallen off mid-race! 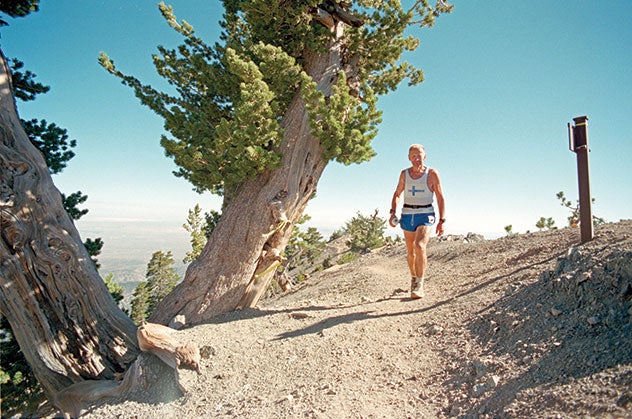 “Jussi is a gentleman and an outstanding athlete with an obviously big heart, both physically and spiritually,” says Winton.

In 1997, when Hamalainen’s friend Pellon passed away suddenly from a heart attack, Hamalainen honored him by completing  10 Western States 100s. Pellon had run 12 Western States 100s, and, though Hamalainen had previously thought he would concentrate on other races, he went back to that race that year, and finished his 10th in 2002.

In 2006, Hamalainen asked Winton if any runner 60 years or older had ever finished under the 24-hour mark. Winton said he doubted it. Hamalainen smiled, and that year, his 60th, came in at 23:43.

Hamalainen says he doesn’t know how long he will race. He has never dropped out of any race, and attributes much of his success to fellow Fin Majamaki, who he met in California when they both ran the Lasse Viren 20K in 1984. “Pauli makes it so I don’t have to think about it,” says Hamalainen. 2003 was the first year Hamalainen did not finish in under 24 hours. Hamalainen had wanted to drop, but Majamaki only had to say, “You’ll feel bad.” Hamalainen pulled himself together and crossed the line in 26:04. He was 56.

As a youngster of 40, Hamalainen would run 200-mile-plus weeks, but now he chooses quality over quantity. He likes to run the trail from Chantry Flats to Mount Wilson, stopping at Cosmic Café at the top to have a Snickers and a Coke. He still ramps up to 100 miles a week, and takes a month to taper. “Now I think about how many times I will do the race,” says Jussi, “not how long it will take.”