Changing education, one mile at a time 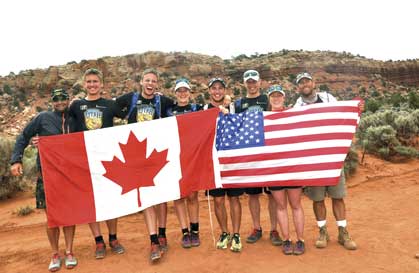 When struggling with complex questions, we runners often find that getting out for a run allows us to see things more clearly. But is there an educational opportunity to connect exercise with our ability to learn? This is the question that ultrarunner Ray Zahab, 44, of Chelsea, California, contemplated during his 111-day, 7,500-kilometer run across the Sahara Desert in 2007.

After barely finishing high school, Zahab dropped out of college and never thought much of academia until his run in the Sahara, when he found himself curious about the history and geography of the vast desert. Engaging with the land through a tactile adventure made these textbook subjects come alive. “This whole new world unfolded right before my eyes,” says Zahab.

He wanted to share this newfound enthusiasm with kids who, much like himself when he was growing up, were left uninspired by traditional teaching methods. Zahab and co-founder Bob Cox, a fellow runner who shared his vision, started impossible2Possible (i2P), an adventure-based educational nonprofit.

The idea was to take small groups of young adults—“Youth Ambassadors”—on multi-day running adventures merged with a specific course study designed by field experts and educators in partnership with Simon Frasier University. Throughout the expedition, the Youth Ambassadors would be tasked with relaying the day’s adventures to schools across the country via live webcasts. Free for those accepted into it, the program is funded by donations from Zahab’s own athletic sponsorships and partnerships.

Last May, I joined the i2P team for their “Utah: Running Through Time” expedition traveling through the majestic Grand Escalante Staircase, a treasure chest of geological history. Using nature as a virtual time machine, the eight-day, 158-mile run would cover 255 million years of paleontology and geology in the region.

I was immediately charmed by the enthusiasm and easy confidence of the expedition’s five Youth Ambassadors—Emma, Holly, Steve, Colin and Zander, ages 17 to 21—who studied maps in the mornings and found their own way (with a couple i2P folks trailing by a mile or so for emergency support). As an ultrarunner and a parent, I found myself nervous about the 18 to 32 miles they were tasked with running each day, wondering how they’d tackle the high-elevation miles over hot jeep roads, loose sand, rocky canyons and even an unsupported day with water crossings. But the Ambassadors had trained for three months prior with i2P virtual coaches on their endurance and strength; come expedition week, instead of giving into nerves, they approached the miles like a moving dance party, singing folk songs or rapping freestyle as they ran.

At lunch, they took a break from the desert sun, resting and re-fueling in the shade of juniper trees. Afterward, they logged online to web conference, via military-grade satellite equipment, with students all over North America eager to live and learn vicariously through them.

The first questions were often centered on the running itself: “Where do you pee?” and “What do you eat to keep going?” But the Ambassadors always steered conversation back to the education, out of sheer excitement for what they were learning. Emma asked if the web audience had ever seen black “teeth” on the beach; when a few answered yes, she jumped into explaining that those were actually ancient marine fossils. Zander riffed off this to illustrate that the desert around them used to be a swampy underwater world.

After wrapping up their daily miles, the Ambassadors followed Dr. Titus, our expedition paleontologist, on evening field trips to hunt for fossils or to measure Dilophosaurus tracks imbedded on a bluff. One evening, still tired and sweaty from the day’s run, they were asked to deduce what the rocky soil was made of by digging their hands deep into it. With black dust flying, the Ambassadors shouted out possible answers until one of them correctly guessed: coal!

This marriage of landscape and learning continued each day as Dr. Titus revealed more of the ancient world hidden in the rocky layers, even joining the Ambassadors for short run segments to answer questions about rock formations or color variations while in motion. Later in the week, we ran to a secret dig site and joined Dr. Scott Samson, of PBS’ Dinosaur Train, to help extract a Hadrosaur. As the satellite live-fed the experience back into classrooms, Holly shouted, “Who knew learning was so fun?!”