A woman takes up trail running to overcome her fears 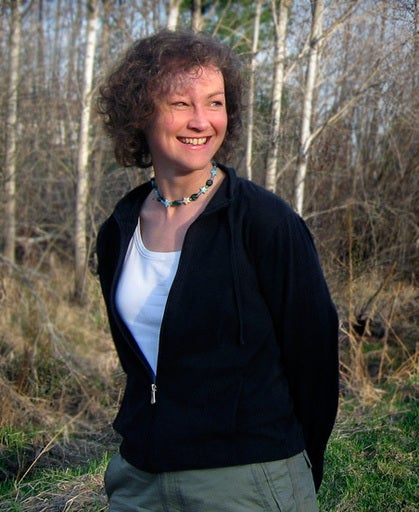 Laurie Simons was 30 miles into the 50-mile trail race called the Le Grizz Ultramarathon, near Glacier National Park, Montana, when she heard loud crashing in the bush. Her heart was pounding, but the 41-year-old runner from Regina, Saskatchewan, moved toward the racket and looked over the road’s edge. She could breathe again; none of the eponymous animals of the race were in sight. Most runners tackling the 50-mile course in bear country worry about meeting wildlife, but Simons had more reason than the others—just one year prior, she had been attacked by a grizzly bear.

In June 2005, Simons was offered a four-month work term at the Banff Center for the Arts, where she could pursue her two passions of furthering her career as a theatrical scenic painter and being active in the outdoors. Her grown sons, Sean and Stephen, stayed in Regina while Laurie moved to Banff, Alberta, ready to explore Banff National Park’s trails. Bear evidence was everywhere that summer; scat was ubiquitous on the town’s paved paths and trails. And on just her second day there, Simons awoke to the news of fellow runner Isabelle Dube’s death by a grizzly in nearby Canmore.

Having injured her knee in a marathon a week earlier, Simons substituted her usual running with hiking. She stayed on well-populated trails and jingled her keys as she went. But one morning at the end of August, exploring near Lake Minnewanka, she relaxed her vigilance. Eight kilometers from the trailhead, having passed numerous tent campsites and feeling annoyed by whining motorboats, she took a side trail to a remote fire lookout.

“I was off in my own little world,” she says. An undertone of sarcasm creeps into her voice. “There was no music,” she adds and hums the ominous music from the movie Jaws. “The first thing I heard were startled grunts … and then two little cubs came crashing through the trees. I was just sick, not with fear, just extreme sadness, and thought, `This is so bad.'”

Behind the two cubs was the mother grizzly, who chased them off the path. “Then, she charged, and I ran behind a tree. I made it just in time, because she stopped on the other side.” Steve Michel, Banff National Park’s Human Wildlife Conflict Specialist, says Simons’ quick action may have changed the bear’s thought track, from a frenzied attack to returning to her cubs.

“I leaned around the tree and I told her, `I was just going, you know,'” says Simons. “She snarled, and I got a really good look at her face and thought, `Oh, she’s beautiful.’ There was some deadfall below me off the trail and I tried to dive into it, but she caught me in mid-air, swiped at my back and my scalp. Then she froze, and I thought, `If you scream, maybe it won’t hurt as much.'”

The ensuing attack lasted a few long minutes. Foremost in her mind was, “Oh, my God, my kids will never be able to find me.” With Simons now quiet and burrowed half under the deadfall, the bear snorted and pawed, moved a few feet away, paced back and forth, snorting and pawing, then faded to maybe 20 feet away, still pacing and snorting. Eventually Laurie didn’t hear any more sounds. Michel says most sow grizzlies will defend their cubs with a couple of swats and, by not fighting back, Simons showed that she presented no threat.

Her eyebrow was hanging by a flap of tissue, so she clamped her hand to her head. Losing blood rapidly, Simons waited for unconsciousness, yet the forest’s brilliant green and shadows stayed. “When it didn’t go black, I started to have hope,” she says. She slowly rose to her feet and hiked down the trail to the lake. There she encountered campers Jason Best and Ken Nielsen, who administered first aid and took her to the Lake Minnewanka public boat launch. “I was absolutely amazed at her courage and her strength,” says Nielsen. “She was calmer than most of the people there.”

Several ambulance rides later, Simons arrived at the Calgary Hospital, where she met her family. She had lost her right eyebrow, part of her right ear, a large portion of her scalp and hairline and skin on her back. “She was pretty drowsy at first, but calm and collected,” says her son, Stephen. “She was just really tough about it.” After a two-week stay in Calgary and seven plastic surgeries over the next two years, Simons had recovered physically but still had mental scars.

Although she had finished a couple of marathons before the Banff posting, Simons had never run any formal trail races. Yet she convinced herself that trail running was going to be her avenue back into living an outdoor life. Her first foray came just nine months after the bear attack. Running a local 52.5-kilometer trail ultramarathon, the Rocket Man in White Butte, Saskatchewan, on the prairie convinced her that she could handle long runs and confirmed her desire to return to the mountains. Showing a strange mix of complete logic and recklessness, Simons knew she’d be fearful in a solo hiking environment, so entered a formal trail race. She hoped the physical challenge would keep her mind preoccupied rather than anticipating predatory animals lurking in the bush.

“I was definitely not going to be the leader, so there would no chance of stumbling across anything,” she says with dry humor, “and if I was last, well, there would be sweepers. Logically I knew the chances of meeting bears were slim, and I could bail out along the way.”

Simons signed up for the 2006 Powderface42, a trail marathon near Calgary in the Rocky Mountain foothills, renowned for its beauty, difficulty and wilderness. And yes, there are bears there. Laurie visited the race site the day before the event. “It was 8 o’clock in the morning and there was no one around. I lasted two minutes outside of the car and got completely spooked,” she says.

Nevertheless, Simons showed up the next morning. She ran with others for long stretches, until, after passing the halfway mark, she found herself alone. “I was so tired and just wanted the race to be over one way or another, whether it’s an animal taking me out or crossing the line,” says Simons. “Near the end, I heard crashing noises and thought, `Oh, yeah, well, come and get me.’ Of course in hindsight I realize it was likely a deer but it certainly kept me moving forward.”

Laurie continued to defy her fears, signing up for the Le Grizz 50-miler in October 2006. The Hungry Horse, Montana, race is whimsically named, and turns potential dangers of running through bear country into comic fodder, riffing on the name, posting many pictures of grizzlies on its website and brochures and even including encounters with wildlife in its waiver. Laurie showed her grit again, continuing on her own as the pack thinned. She finished triumphant, taking second place in the women’s masters division in 9:26:57. In 2007, Simons continued to excel in trail races, including the Jemez Mountain 50K, Old Gabe 50K, Powderface42 and the HURL Elkhorn 50 mile.

Simons’ return to living life on her terms necessitated an absolute acceptance of what had happened, and she draws satisfaction from the fact that the National Parks staff never located the bear that had attacked her.

“[The bear] never went beyond protecting those cubs—the fact that I’m alive shows that,” says Simons. “She didn’t want to meet me any more than I wanted to meet her.”

Simons’ scars are now covered by a mass of fine, curly hair. It’s hard to fathom that this ethereally pretty, even delicate-looking woman has a will and determination of forged steel. Son Stephen says his mother’s encounter was a life-changing experience. “It made her more committed to doing what she wants in life.”

Trail runners can move so quickly and quietly on trails that they boost the potential for a wildlife meeting. Here’s what you can do to reduce those chances.