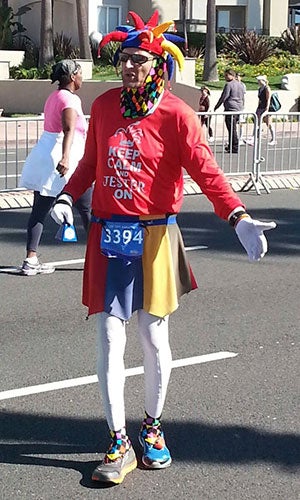 On a warmer-than-usual November morning in 2011, 400 runners did their final stretches and shake-outs as they waited for the horn to signal the start of the Santa Clarita Marathon in Santa Clarita, California.

Ed Ettinghausen, however, was already on the course. He stood on a step stool about a quarter mile in, wearing a colorful jester hat, a skirt and tights, ready to ring bells, cheer and high-five every runner within reach. After the last runner passed, Ettinghausen ran to the start, placed his foot on the timing mat and began the race. Then, when he crossed the finish line, he did not collect his medal right away, but ran back to the 26-mile mark, where he rang his bells, yelled words of encouragement and gave high fives until the last runner passed, three hours later.

Ettinghausen, known by many as “The Jester” for his trademark attire, does this “jester cheering” routine at every marathon he runs, and he runs a lot of them. One month after the Santa Clarita Marathon, he broke the world record for the most marathons run in a year.

Ettinghausen, now 54, of Murietta, California, had been running from a young age, but had been frustrated by frequent injuries. His love for the sport was rekindled, though, in 2009, after completing an ultramarathon. This time it wasn’t the running that got him hooked, but the people.

“Having been raised in the foster care system, I always felt like an outsider,” he says. “Here was a group that accepted runners of all levels, regardless of an individual’s background, religious or political affiliations, income or job status.”

Ettinghausen became “The Jester” almost by accident. “I would wear various funny hats and crazy-colored board shorts at marathons just for the fun of it, after using them for skits at my running club,” he says. “At one point I put on a jester hat and it just seemed a perfect fit for my personality.”

In August 2010, Ettinghausen heard of a Runner’s World competition for the most race miles run that year. He had done enough marathons and ultras to be in the top five as soon as he entered the contest.

“I figured that if I ran marathons and 100s most of the weekends for the rest of the year, I could move up to number one,” he says.

The first-place prize was $25,000 to a chosen charity, and Ettinghausen had a charity dear to his heart. His youngest daughter, 15 at the time, had been diagnosed with Type 1 diabetes. Ettinghausen wanted to win the prize for a local charity that supported and educated teen diabetics. At the end of the year, he snagged the win with over 3,000 race miles.

Ettinghausen figured he had done enough marathons and ultras since the previous August that if he kept up his racing through the following summer, he could break the male record for most marathon or ultra races in a year, which was 106 at the time. His final race in July 2011 was the Badwater 135, a 135-mile race through California’s Death Valley. Coincidentally, it was also his 135th marathon or ultra in 365 days. 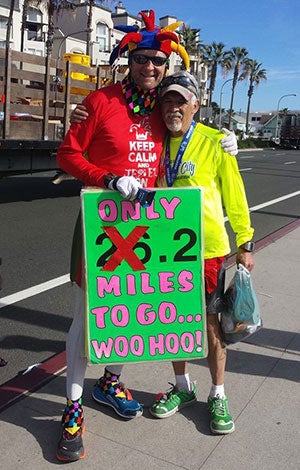 “The Jester” with Terri Perez at the Surf City Marathon. Photo courtesy of Terri Perez.

It was during that first word record attempt that Ettinghausen began doing his signature “jester cheering” at the start and finish of every marathon he ran, as a way to thank the community that had welcomed him. Runners took notice of him at races—particularly at ultramarathons—and wanted to know more about the man in a jester costume putting his own race on hold to cheer for them.

Soon a whole “Jester Nation” of followers was born. “I found that new people in the sport seemed to be drawn to me, and felt more comfortable seeking my advice,” Ettinghausen says. “I mean, who couldn’t go up and talk to the only guy at an ultra wearing a crazy hat, tights and a skirt?”

Ettinghausen now runs a Facebook group, Run Jester Run Friends, with over 3,700 members, which he regularly updates with inspirational messages.

“Ed is one of the most gracious runners you can meet,” says Maurine Lee, one of Ettinghausen’s closest friends. “Even though he is trying to complete his own races and might be exhausted, he will stop to answer questions or support another runner who is struggling.”

“As impressed as I am with his physical accomplishment of [running] 100-milers, I am equally impressed with Ed’s compassion,” says Cory Reese, a friend and fellow ultrarunner. “The first time I met Ed was at the Javelina Jundred, and he was ringing a cowbell as runners passed by. I later learned that he carried that cowbell the entire 100 miles to cheer for other runners.”

In 2014, Ettinghausen embarked on a new world-record attempt: the most 100-mile races completed in a year. Though he was eager to test his own limits, Ettinghausen still wanted to support his friends as he had been doing at marathons.

He decided he would do a variation of his usual “jester cheering,” forgoing the setup at the start and finish but still encouraging runners along the way with kind words and high fives. When he could not cheer, the cowbells hanging from his fuel belt would do the cheering for him. Runners who heard the clinking of his cowbells knew just what it meant: “Keep calm, run strong and jester on,” Ettinghausen’s mantra, which was inspired by the old British World War II motto of “Keep Calm and Carry On,” and “Boston Strong,” a phrase that became popular in the aftermath of the 2013 Boston Marathon bombing.

On December 6th, 2014, with the help of Martha, his wife of 33 years, Ettinghausen organized a “Run Jester Run” race in Rohr Park, in Bonita, California, to give his supporters the chance to run with him. Ettinghausen was joined by over 70 of his friends wearing a variety of jester hats, running laps around the park on a three-mile trail loop.

On December 7th, fueled by the support of his friends—most notably Martha, who doubles as his (licensed) massage therapist—Ettinghausen “jestered on” to set a new world record of 37 100-mile races for the year, breaking the previous record of 36, set by Liz Bauer in 2012.

“The Jester” went on to run three more 100-mile races in December, ringing in the new year with the 6-Day Across the Years Race in Glendale, Arizona. Between December 28th and January 3rd, Ettinghausen ran 414 miles, totaling 4,863 race miles for the year.

In 2015, Ettinghausen will compete in the invitational 24-Hour World Championships in Turin, Italy, on April 11th-12th. He also plans to complete his 100th race of 100 or more miles in April or May. (He’s currently at 94).

But for now, Ettinghausen says he will stick to his mantra and “keep calm, run strong and jester on,” all while encouraging thousands of others to do the same.

Arianne Brown is a mother of six young kids. She enjoys running the mountain trails of the Wasatch and beyond. More of her writings can be found on her Facebook page, A Mother’s Write. You can also follow her on Twitter @arimom6 or contact at ariannebrown1@gmail.com.