Two years after a climbing accident left him with a broken back, Joel Anderson finished 10th at the Leadville 100 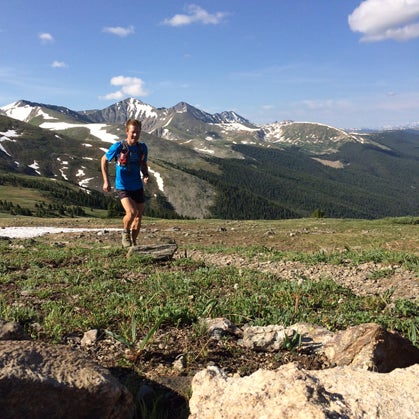 By April 2013, Joel Anderson had lived in Colorado long enough that he’d spent a lot of time up high. He had hiked up 14,000-foot peaks, run a couple 50-mile races at altitude and climbed the Diamond, a sheer 900-foot face on the east side of 14,259-foot Longs Peak. But it was an unremarkable 35-foot climb at a Denver gym that proved his biggest obstacle.

Anderson was lead-climbing, clipping his rope into quickdraws as he went for protection. Excited to reach the top of the climb, he neglected to clip his rope in one final time, thinking the previous quickdraw would catch him. “I yelled ‘take down’ and let go,” Anderson, now 33, says.

Anderson’s wife, Erin, who was pregnant, was belaying him with a borrowed rope that was thinner than he typically used. He fell to where he thought the rope would catch him—and kept falling. “The thin rope flew through the device with no friction,” he says.

Anderson remained in a seated position as he plummeted toward the padded gym floor. After he landed, friends rushed to hold him upright. He started sweating uncontrollably. As he gasped for air, the wind knocked out of him, he remembered all the times he’d fallen on his snowboard and landed on his tailbone. Maybe, he thought, he’d only be bruised, just like all the times he’d gone down on the slopes. But the height from which he’d fallen made him doubtful.

It was a lucid thought in a stressful moment. A CT scan at Denver Health showed a fracture of one of his vertebrae, and Anderson was wheeled in for emergency surgery, where his spine was fused.

“In other words, five large vertebrae were made into one solid piece of spine with rods and screws,” he says.

Anderson wondered whether he would ever be able to run and climb—or be active, period—again.

Raised in Minneapolis, Anderson began rock climbing when he was 18. He was soon climbing or training for climbing five days a week. By his mid-20s, he was living out of his 1988 Mazda pickup and climbing for much of the year, spending winters in Hueco Tanks, Texas, or Bishop, California, and summers in Squamish, British Columbia.

In 2009, having completed nursing school, he followed Erin to Denver, where she was starting a residency in emergency medicine. (They were not yet married.) There was ample climbing, including up the diamond on Longs. 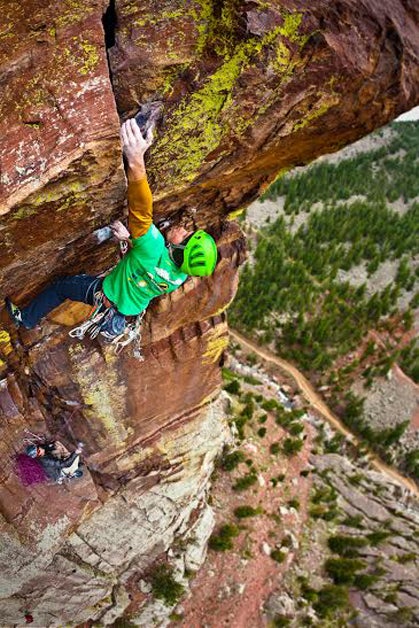 Anderson climbing before the accident. Photo by Wade David

In 2010, Anderson decided to run the Denver Rock ‘N’ Roll Marathon. He figured his fitness from climbing and hiking above 14,000 feet would make a marathon easy, and set an ambitious time goal.

“That first marathon was a disaster,” he says. “After going out too fast, I walked painfully for many miles to finish.”

But in a story arc many runners will recognize, he began plotting his next race as soon as the swelling subsided. He began climbing less and running more. “Seeing so many people of all shapes and sizes pass me in such a difficult endeavor motivated me to become a runner,” he says.

He was further motivated by Colorado’s trails, which he found more engaging than roads. In 2011, he ran the Grand Mesa 50 Mile, placing third (“but a number of fast guys went off course,” he adds). He ran a couple of sub-three-hour marathons, and the Silver Rush 50 in Leadville. In 2012, he started the Leadville 100, but dropped at mille 76 with breathing trouble. The next year, in the best shape of his life, he vowed to return and started training. Then he came literally crashing down to Earth.

After the accident, Anderson despaired at first. “I spent a lot of hours researching spinal-fusion forums online, and concluded the rest of my life would be pain and inactivity,” he says.

The fusion process can take six months to heal, each day an exercise in avoiding a bump or a too-heavy lift that could set you back to the beginning. Anderson’s daughter was born in June 2013. His surgeon told him he could lift her, but not her and a car seat at the same time; that was too much weight. He could only walk on flat surfaces. Questions about when, or whether, he could return to running were met with uncertainty. 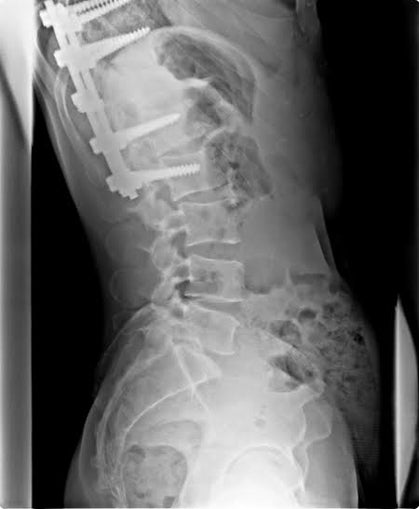 Anderson’s back after surgery. The fused vertebrae and screws are visible near the top. Courtesy of Joel Anderson

To stay sane, Anderson says, he walked a lot: 80 or so miles in the weeks following surgery. He ate only fruits and vegetables to maintain a healthy weight. And he began to draw inspiration from athletes like Siri Terjesen, who ran national-best times in the 100K and 50K in 2003 and 2006, respectively, all with a fully fused spine due to scoliosis. “She wrote to me and encouraged me to pursue running once everything was healed,” he says.

That August, he was cleared to go hard on the elliptical. It was the first time since the accident he had been able to make himself sweat or breathe hard. “It felt so good,” he says. By the end of that month he was cleared to try running; after a few awkward jaunts around the lake by his house, he drove up I-70 to Grays Peak. He ran up to the 14,278-foot summit and back to his car.

His back felt fine, and though he suffered the worst delayed-onset muscle soreness of his life, he was happy. “I was running again in the mountains and I loved it,” he says. 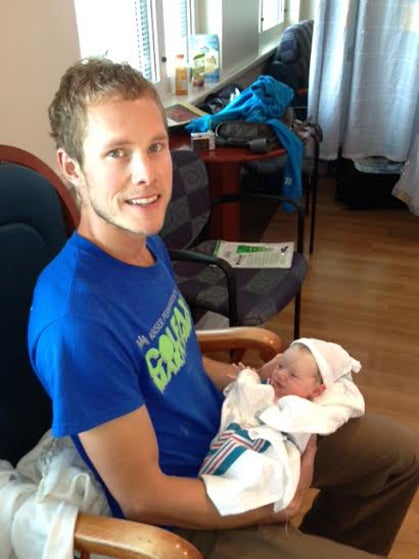 Anderson and his daughter shortly after she was born. Courtesy of Joel Anderson

In October 2013, after moving back to Minnesota to be closer to family, Anderson was again running 60 miles a week. He ran the Twin Cities Marathon in 2:54:00. “My family was at the finish line and it was very emotional,” he says. “I just wanted to cry.” He returned to ultras later that month, at the Wild Duluth 50K on the Superior Hiking Trail.

After only eight months in the Midwest, he and Erin began to miss the mountains. They moved to Boulder, Colorado, in the spring of 2014.

“I immediately began running the nearby trails and preparing for Leadville,” Anderson says. That August, he finished the 100-mile race in 22:37:20.

This year, Anderson took his third crack at Leadville. “I trained like an animal,” he says. That meant 70 to 100 miles per week with over 10,000 vertical feet, but also plenty of time pushing the baby jogger, or run-commuting to and from shifts as an ICU nurse.

“The run home is eight miles and can be done on singletrack,” he says. “After a busy shift I felt like I had completed a 50-mile race.”

As he stood in the starting corral in the town center before sunrise, Anderson hoped for a 21-hour finish. But his friend Jason, standing nearby, predicted he would finish in 20.

At Winfield, the 50-mile mark and turnaround point, Anderson was 25 minutes ahead of his 2014 pace. From there, first with his friend Alejandro pacing, and later Erin, he ran most of the remaining miles with no cramping, stomach problems or other issues. The only problem they ran into, Anderson says, was that Alejandro couldn’t find the car keys after handing off his pacing duties, and they worried he might be stranded 14 miles from town.

“I was running well and becoming more optimistic with every passing mile,” Anderson says. “The shores of Turquoise Lake went on forever but I was still running the majority of the terrain and finishing around midnight”—the 20-hour mark—”was beginning to sink in.”

Before long, he could make out the glow of Leadville, and then of the finish line. He crossed it in 20:09:33, good for 10th overall and 8th male. To top it off, Alenjandro had located the keys and was waiting for them at the finish.

“This was the race of a lifetime,” says Anderson.

As for what’s next, Anderson says he’ll be back to climbing walls. “This month will be mostly mountain biking and climbing,” he says. He has plans to go for a PR in a road marathon. He might try the “Longs Peak Triathlon,” an unofficial challenge that involves biking to the Longs trailhead from Boulder, hiking and climbing to the summit, then biking back.

“Breaking my back changed the way I view life, risk and recovery,” Anderson says. “Advice from online forums will only be from the perspective of the injured who continue to sit at their computer. The voice of the injured who are recovered and healthy isn’t in the forums, because they are out enjoying life.

“Having a major injury is an eye opener about how fragile we are, and makes life something to cherish,” he continues. “I cherish every moment that I am able to use my body to interact with the incredible world we live in.”