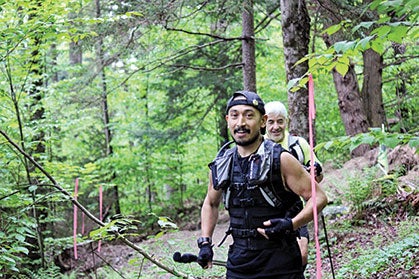 Six days into the 2014 Peak Races 500, Bautista is all smiles. Photo by Madmotion/Peak.com Ultra

“You mean you ran 500 miles in a calendar year, right?” That was a typical response Nick Bautista heard after finishing the 2014 Peak Races 500-Mile Ultramarathon in Vermont. An even more common response was a phrase familiar to just about any runner who has told family or friends that they are training for an ultramarathon: “Why?”

Bautista, a 33-year-old personal trainer from Manasquan, New Jersey, with a small, fit build, had earned the moniker “Storm Trooper” by once showing up to a 50-mile race wearing a bulky homemade hydration vest that looked like it had been issued by the military. He understood why people would question the distance; not long ago, he had doubted that anyone could run 500 miles, let alone himself.

Bautista began running in 2010 for what he calls “health reasons,” but was soon compelled to try an ultramarathon. “My personality is pretty black and white,” he says. “I’m all or nothing.” After a few 100-milers, he grew tired of repeating the distance, and looked to see what else was out there.

Bautista barely slept during the 2013 race, and “went psychotic with sleep deprivation.” Around mile 330, after a week of running, he tried to stab his pacer with a hiking pole.

“I don’t remember what my pacer said, but I remember snapping, going after him,” he says. “After my little tantrum, my pacer looked me in the eye and said, ‘Are you finished? Then let’s keep moving.’”

That year, Bautista’s crew pulled him at 460 miles due to several injuries: his feet had deep, infected ulcers. Two days later, Bautista signed up for the 2014 race. “I didn’t see 460 miles as failing,” he says. “I saw it as a practice run.”

In training, Bautista ran 20 to 30 miles on trails every day. To mimic the elevation gain, he’d hop on the Stairmaster with a 50-pound pack for up to three and a half hours, “until I felt like passing out,” he says.

During the race, Bautista forced himself to sleep two to three hours every 17 to 20 hours, then ran non-stop during the day. “I had to run faster, and run continuously through the day and night. in order to earn my sleep,” he says.

“The first 100 miles are awful, because it feels like you’re getting nowhere, while miles 200 and 300 are very mechanical,” he says. His low point was mile 460, the previous year’s drop point. “I was trying to keep myself from crying,” he says. “Honestly, I was scared to cross the finish. I had been doing this for nine days straight and all of a sudden, it would be time to stop.”

He finished the 500th mile in 9 days 5 hours 15 minutes, tying for first with one other runner. “People were clapping for me,” he recalls. His wife Alison, who had crewed for him, slammed into him for a hug.

“The most difficult part is seeing him put himself through so much pain,” says Alison. “But I still push him hard, because that’s what he wants.”

When asked if he will run any more 500-mile races, Bautista doesn’t hesitate to answer no. “The 500 was my obsession for a while,” he says. “I joked with the former RD, Andy Weinberg, that he should put on a 1,000-mile race. That would make me happy. The longer the distance, the better.”