A California runner returns to the trails, three years after a devastating accident 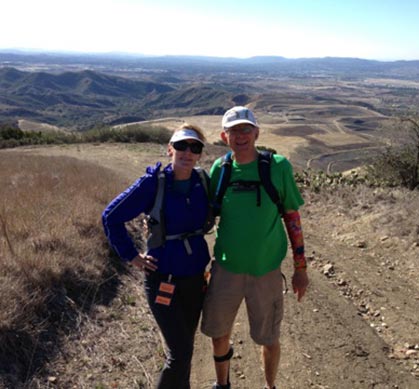 Leon Gray, a 65-year-old landscape contractor who lives in Fullerton, California (but retains his native-Texan accent) has long been a significant personality in Los Angeles-area trail running.

On January 26, 2011, Gray went out for a spin on his mountain bike. Toward the end of his ride, he was navigating a crosswalk when a bus, traveling just shy of 20 miles per hour, struck him. The impact fractured Gray’s right leg, elbow and shoulder. It shattered his pelvis. His head smashed the bus windshield and he was rushed to a hospital by helicopter. He was in a coma for two months, and the outcome looked bleak.

Gray’s injuries were so severe, doctors were unsure if he would live. Damaged internal organs struggled to function and at times his sodium levels went haywire, reaching counts usually fatal to a man his age. Procedures to rebuild the wiry trail runner began immediately.

And the tenacious Texan held on. By the time he woke up, the incisions surgeons made to repair his body had healed. He couldn’t remember the accident.

“We [still] don’t know what happened—if I was in the bus’s blind spot or if it jumped the light or what,” says Gray.

Although he has no memory of it, Gray says the first thing he did when he regained consciousness was tell his wife he loved her. He applauds his subconscious for thinking to do so.

It took Gray several months before he could walk. He went from bed to a wheelchair to a walker to a cane to eventually making the trip around the block by his house. He says he has walked the block, which is about a quarter-mile, 1,100 or 1,200 times since his accident to regain strength and mobility.

Before the accident, Gray was an accomplished runner. “I loved doing the short, tough trail races,” he says. He favored distances around 10K, but would also occasionally race 50Ks, almost always winning his age group. He was a member of the Snail’s Pace Running Club. In 2010, he was elected President of the Trail Headz Running Club, but never got to hold a meeting. Fellow club members would often turn up at the hospital in sweaty, post-run garb to pay their unconscious clubmate a visit. The roads and trails of Fullerton felt empty without him.

Skip Rogers, a fellow member of the Snail’s Pace Running Club who was training for his first marathon (Los Angeles) in 2008, says Gray was always happy to lend advice. “Leon’s many years of running both trails and asphalt make him a true wealth of information. His easy-going manner and gregarious personality all add up to a true trail runner.”

Rogers also reminisced fondly of a race shared with Gray—the Endure the Bear Ultra—in which he ran the 30K and Gray competed in the 50K. “I huffed and puffed and struggled through the course,” says Rogers. “As Leon wrapped up his 50K, he looked and acted as if he could go for another round. No braggadocio, just pleased to run the course strong.”

Despite the need now to wear a brace on his right leg and persistent nerve pain in both feet, Gray has never given serious thought to hanging up his running shoes. He eased back into the sport, patiently increasing his mileage until he could trot a few miles at a time.

“I get down sometimes, but that is to be expected because I can’t make the progress I used to. But it is what it is,” says Gray.

He may never run as fast or as easily as he once did, but Gray has come a long way since his mincing, inches-long steps with a physical therapist. He covered 26 miles last year at the Nanny Goat 12-hour event in Henderson, Nevada, despite “hellacious blisters.” In 2013, he was reelected as President of the Trail Headz Running Club. This year he completed 62 miles at a 24-hour run in Riverside, California, on Memorial Day.

“I’m [starting] to do lots of multi-hour-long excursions,” says Gray, who has a 30K and a half marathon scheduled for November. He is also participating in the Jackpot Ultra Running Festival in Henderson, Nevada, in February, with plans to run 40 miles in the 12-hour run.

At the start of 2014, Gray set a goal of running 800 miles in a year. He reached that mark after only six months.

“I still have issues, but I just deal with it,” says Gray. “My balance sucks, so at times I walk like a drunken sailor. My night vision is crappy and [I have] sight in only one eye, so depth perception can be a challenge. All of that means I probably cannot do the real technical trails, especially at night, but I do lots of runs on dirt roads, trails and hills. I just have to be careful to not let my ultra mind [over estimate] what I really can do.”

“Leon is always looking for a good laugh, a fun training or race course, and friends to share them with,” says Rogers, and even after the injuries, that much has remained true.