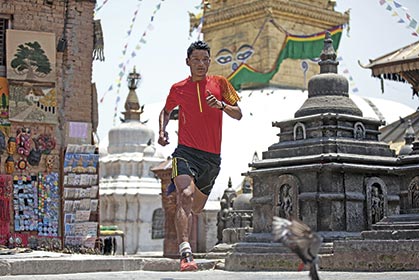 Tamang strides out at Swayambhunath Stupa, a holy shrine in the Kathmandu valley. Photo by Lloyd Belcher

With eight miles left to go in the 2013 Annapurna 100K, defending champion Aite Tamang was struggling. His lean, muscular legs limped and struggled to carry him up the steady climbs, and an uncharacteristic grimace spread across his usually joyful face. He hustled to stay on the heels of his rival, Tirtha Tamang (no relation), who showed no sign of fatigue.

The two Nepalese runners had run side by side for the majority of the race. As they approached the next checkpoint, Aite Tamang slowed to a walk. He sat down on a plastic chair next to a fruit stall, lorded over by an aging Nepalese woman in a colorful yak-wool shawl. Tamang ducked his head into a bowl of soup and slurped, while Tirtha joked and laughed with a group of locals who had surrounded the runners.

Before they left, Tamang pulled some money out of his running shorts to buy two Snickers bars from the local convenience store, perched cliff-side next to the trail—one for himself, and one for Tirtha. With smiles, the two jogged off together to do battle over the last few miles.

In a sport with increasing amounts of public visibility and media attention, Aite Tamang has remained surprisingly under the radar—despite finishing in second place, just a minute and a half behind famed Catalonian mountain runner Kilian Jornet, at Malaysia’s 2012 Kinabalu International Climbathon. And, in spite of the influx of sponsor money into the sport, Tamang’s life has remained as simple and humble as his roots.

Tamang grew up in Kavre, a village that sits at the bottom of an emerald-green valley five hours from Kathmandu by bus. The village receives little sunlight, thanks to its surrounding high-alpine peaks.

From town, a narrow trail climbs 2,000 feet up to Tamang’s home, which he grew up in and now shares with his parents, his wife, Man Maya, and their 9-year-old daughter, Anjali. The home has no running water, an hour of sporadic electricity per evening, and a hole, dug into the compacted dirt floor, where the daily fire is made for cooking and heat. Several buffalo, chickens and goats stand behind a two-foot wall in the main room.

Growing up, Tamang left his home at 5 a.m. six days a week to walk alone down the steep trail to his village center, to catch a bus to his school in a neighboring village. After joining the Nepalese Army at age 18 and running to stay fit in order to serve his country, he developed a passion for running long distances. He ran his first marathon in, as he remembers it, “maybe 2:30 something.”

After several more strong performances at the marathon, he was hungry to run longer—to get off the potholed, busy roads and into the mountains.

“I live in the mountains, so I am part of the hills,” he says. “They are strong and tough. They give me energy.”

The Making of an Athlete

In 2011, a prominent race director in the Himalayas and former Ghurka in the British Army, Ramesh Bhattachan, met Tamang and offered him the opportunity to train full time under his wing. Using daily training regimes from his military years, Bhattachan was coaching a squad of runners out of his family home in Pokhara, a day’s bus trip from Kathmandu. As long as Tamang ran under the army’s name, he could still earn full pay while training.

“I had no idea if these boys would be able to compete internationally, but I knew they were tough, hard workers, and, with enough running, they could compete with the best,” Bhattachan says. “I want to show the world how good Nepalese runners really are.”

Few native Nepalese runners had ever raced internationally, other than Dawa Sherpa (now a resident of Switzerland), who won the inaugural, 166-kilometer Ultra-Trail du Mont-Blanc (UTMB) in 2003.

A strict disciplinarian, Bhattachan encouraged his charges to keep their mileage high, with several hill and speed-specific sessions through each week. In preparation for his first international race, the 2012 Hong Kong 100, Tamang trained four to seven hours a day, six days a week.

“Most weeks I would run nearly 200-something kilometers,” he says.

He finished second to South African Ryan Sandes at the Hong Kong 100 that year, but, after some disappointing finishes in early 2013, Tamang called it quits with his coach.

“[Bhattachan] helped me a lot and gave me many opportunities,” he says, “but it was time to move on.” He was concerned about the high miles, often feeling drained and lacking energy, so he set up his own training base in Kathmandu with his good friend, Samir Tamang. They spent their time trekking and running across glaciers, snow and loose Himalayan trails together.

In the final miles of the Annapurna 100K, neither Tamang nor Tirtha would give an inch. The sun had dropped behind the peaks. As they neared the finish line, cheers rung out across the mountains. At the last minute, Tamang turned on an explosive pace and crossed the finish line two seconds ahead of Tirtha, in just under 11 hours.

“I knew he would win,” says Bhattachan. “He doesn’t know how to give up.”

Several months later, at the 2013 UTMB, his first time competing in Europe, Tamang’s race went less well. He suffered in the cold overnight—but true to form, he soldiered on.

“It’s difficult leaving Nepal to race,” says Dawa Sherpa, who offered his support to Tamang at designated crew checkpoints at UTMB. “The trails, the food and the atmosphere are all very different. Nepalese people are not used to any of this.”

Tamang persevered and reached Chamonix in just under 24 hours—good enough for 13th place. He ran down the finish chute with a Nepalese flag in his hand and a big smile on his face—and a sense of determination to return to Chamonix to compete again in future years.