Jim Kravets is easy going. He makes all the going seem easy, even if he’s running up and down rocky trails in the pitch dark … 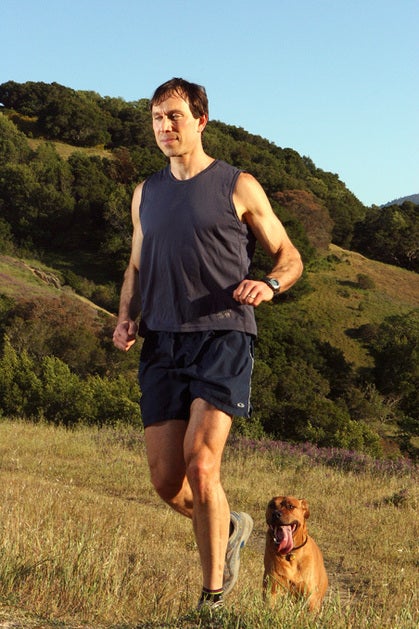 Jim Kravets is easy going. He makes all the going seem easy, even if he’s running up and down rocky trails in the pitch dark and pouring rain of a northern California winter morning, or heading off to an exotic destination with a one-way ticket and no plans for what to do when he gets there.

The lanky Marin County journalist has never run the same race twice, and never placed below fifth in any race. He won the 1999 Woodside Half Marathon in Woodside, California (wearing a pink dress, based on erroneous information that this was a costume event), the 2000 Big Basin Redwoods Trail Half Marathon and the Napa Valley Wine Country Trail Half Marathon the same year.

But it’s been awhile since he’s raced. Although obviously talented, he’s remarkably free of the competitive gene, running trails for sheer pleasure—that, and to make possible his other hobby, which is eating.

His running buddy David Pruskin calls Kravets “one of the strongest people I’ve ever run with,” adding, “Anytime Jim suggested a run, I knew I was in for something off the charts. Still, the thing I enjoyed most about running with Jim was the long, carefree conversations. In some ways it was relaxing, as much as a two-and-a-half hour run can be.”

Says Josh Hudnut, who has run with Kravets in Turkey and Greece when the two worked together as adventure-trip leaders, as well as around the Bay Area. “He’s strong but not competitive, and calibrates his runs to whoever he’s with. He’s not all about being good—he’s just good.”

“At this point, if I stopped running, I’d quickly weigh 400 pounds,” said Kravets recently, over a post-run Turkish breakfast of olives, yogurt, figs, cheese, cucumbers and almonds. He and his wife of three years, Kristan Diefenbach (also a runner), plan to celebrate their 40th birthdays next year, and indulge their love of travel, by each selecting a meal and then traveling to eat it in its authentic setting. “Hers might be in New York,” he says, “and mine might be in Indonesia.”

That’s not why he started running in the first place, though. At the age of 24, he ran to relieve stress while caring for his dying grandmother. Although Kravets was an athletic teenager, playing soccer on the Highland Park High School team in the suburbs of Chicago, he never thought of running as fun, an unfortunate fact he attributes to his soccer coach, who punished the team by making them run a mile for each goal they lost. “It took a long time to break that negative association,” he says. But in 1991, he was in Queenstown, New Zealand, working as a cook at a ski resort, when he got a call that his grandmother was ill, so he flew to Miami and stayed for two months.

“I didn’t even have any running shoes,” remembers Kravets, “so I borrowed my grandfather’s golf shoes and ran up and down the beach, just to get out of the house and clear my head.”

Today, he remains low-tech with his running gear, usually wearing the same shirt every day. “Do you do a lot of laundry?” asks a companion. He laughs. “That’s what my wife would like to have you believe.” He uses this limited wardrobe as one of his excuses for preferring to run alone. “I’m too skanky,” he says facetiously.

After his grandmother died, Kravets was, he says, “adrift.” With no job and no plans, he traveled to Marin County, California, to stay with an aunt and uncle, and never left. His uncle, the jazz pianist Denny Zeitlin, was an old-school mountain biker and had a trail map of Mount Tamalpais. “I bought my first pair of running shoes in California, and just let loose on the trails of Mount Tam,” he remembers. “At first I was afraid of hills and sought out the flats.”

Then one day his uncle took him out on the spectacularly varied Yolanda Trail, and he loved the combination of hill climbing and faster running sections. “I haven’t done a flat run since,” says Kravets.

His current routine is to leave the cozy 100-year-old, fruit-tree-ensconced Fairfax house he and Kristan bought in 2004 and run to the end of the road, where Deer Park provides an entry to the trails of Mount Tam. But he loves to explore new trails and claims the only reason he races is to learn about trails he wouldn’t have found on his own.

Although the steep and rocky terrain of his regular path is treacherous, says Kravets, “If you hit the right speed, you can run up anything.” A friend once advised him to carry an open water bottle while running trails. If the water sloshes out, it means you need to slow down and smooth out your steps.

That’s one of many tips Kravets credits with keeping him injury-free for the past 15 years. He runs only every other day, alternating with biking to give his muscles recovery time. And he slows down on the downhills. “My only goal,” he says, “is to run Monday in a way that I’ll be able to run again on Wednesday.” He believes that the softer terrain offered by trails makes them safer than pavement and dismisses the potential hazards that make some people wary of trails. “If you hiked with me, you’d see me stumble and trip a dozen times. But when I’m running, I’m tip-toeing and the rough ground is not a problem.”

As editor of the West Marin Citizen, a newspaper founded in May 2007, Kravets has an intense work schedule, and pops out for a run whenever time allows— sometimes before dawn, sometimes between layout drafts of the paper. Wherever he is, he finds a way to run because it makes everything else better. “I’m not really aware of a runners’ high,” he says, “but I think it keeps me from getting the human low.”

Heather Liston is a freelance journalist living in San Francisco.

15 Years In, The Lake Sonoma 50 Is Keeping It Fresh