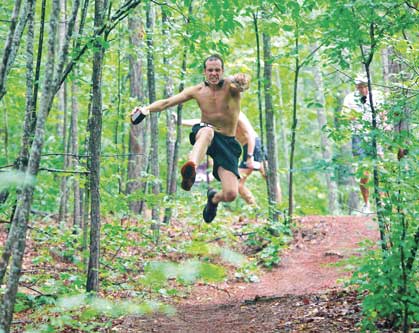 Bruner gets air at the Hot to Trot 8-Hour Race in Lithia Springs, Georgia, 2012.

On May 8, 2008, Andy Bruner went for a jog—his first in 10 years. Struggling up a steep hill near his apartment in Augusta, Georgia, in a beat-up pair of Pumas, he felt his lungs “burning like Chernobyl,” the consequence of his pack-a-day smoking habit. Ninety-degree temperatures and Bruner’s history of asthma piled on the pain—but he refused to turn back.

Earlier that day, Bruner’s father, had received a lung transplant. Bruner’s evening slog up the hill was an effort to celebrate his father’s new life, as well as honor the anonymous donor. Though he had no inkling of it that day, a few years later, Bruner would be finishing 100-milers and snagging podium finishes at ultras throughout the South.

Bruner, now 32, grew up in Wheaton, Illinois, a suburb of Chicago. The youngest of three children of a pharmacist father and a radiologist mother, he says he was a “nervous little kid.” His earliest memories are of imagining worst-case scenarios, such as the Earth plunging into the sun. An overactive imagination caused sadness and fear that, as he grew into adolescence, evolved into low self esteem and depression.

“[The depression] was all encompassing,” Bruner says. “No single event would trigger it. It’s just how I was built.”

Afraid of burdening his parents, he kept his problems to himself. But as a sophomore at Marshall University in Huntington, West Virginia, he spiraled out of control, drinking every night and blacking out routinely. Alcoholism fueled his depression. In high school, he had begun cutting his wrists with a razor, which became more frequent in college. One day, his roommates discovered Bruner bleeding deeply and contacted his parents.

Bruner returned home “disgraced” to a bewildered family. He spent months in a psychiatric ward; recovery programs were helpful, but he’d often slip back into depression, drink, overeat and cut himself. The pattern continued for six years.

“It seemed that he’d start to show some progress, and then he’d relapse,” says Betty Bruner, Andy’s mother. “Each time, it was heartbreaking, just horrible to watch. You feel so helpless.”

After retiring in 2004, his parents moved to the rural community of Lincolnton, Georgia. Bruner followed them, enrolling in courses at Augusta State University and later working as an administrative assistant in the library—all while continuing to drink, smoke a pack and a half a day.

In 2008, Bruner’s father, Wil, then 68, was diagnosed with a lung disease with no known cure. The family turned to the Mayo Clinic in Jacksonville, Florida, which approved his application for a lung transplant.

“The transplant hit me on a very deep level,” says Bruner. “Someone was willing to give another man a chance at a few more years. I took a very close look at myself and realized, ‘I’ve been destroying the gift of life.’”

His father had once been an avid runner, so Bruner decided to follow in his footsteps and started jogging. With the help of Nicorette gum, he quit smoking within two weeks—and, while he was at it, also gave up drinking.

Clutching to memories of competing alongside his father in local 10Ks and biathlons when he was younger, Bruner laced up his running shoes every day despite feeling awful for the first three months. He stayed committed because running filled a lot of time and kept him accountable.

Marcel Payne, a runner and counselor in a recovery program whom Bruner had met in classes at Augusta State University, challenged him to run a local 5K. Bruner struggled but finished the race in about 27 minutes. Four months later, he ran the Augusta Half Marathon in 1:42.45.

Barely a year passed before he competed in his first ultra, the FATS 50K in North Augusta, South Carolina. “When I reached the 26.2-mile mark,” he says, “I wondered, ‘Where are the medals, champagne and dancing girls?’ I only saw trees.” He pushed on, finished second in 4:52 and knew then he wanted to be an ultrarunner.

In late 2011, his father developed an abscess in his lungs and diverticulitis in his colon and was treated in Jacksonville. The stress took its toll on Bruner. After 18 months of sobriety, he had a relapse, but an outpatient substance-abuse program helped him find his way back to health.

The past year, Bruner has been more balanced—working out at the gym regularly, taking antidepressants, studying public health with the goal of earning a PhD in epidemiology and completing eight ultras, three marathons and a 70.3-mile triathlon. In 2012, Bruner returned to the FATS 50K, capturing his first ultra win, in 4:28, and gaining a supportive network of runner friends.

With encouragement from friends, Bruner tackled Alabama’s Pinhoti 100 later that year, finishing in 29:17:14. Though he enjoys the speed of road running (marathon PR of 3:01), he prefers the peacefulness and camaraderie of trail races.

Says Betty Bruner, “It’s joyful to see him finally getting over all that darkness.”