“If you live here in Marin County, everyone’s going to have to try and run the Dipsea at one point or another,” says Edda Stickle, 74.

She’s referring to the grueling seven-and-and-half-mile trail race that starts in downtown Mill Valley, California. Covering an iconic 688 steps and treacherous footing through Muir Woods and Golden Gate National Recreation Area en route to the finish at Stinson Beach, the Dipsea is America’s oldest trail race, and the country’s second-oldest footrace behind the Boston Marathon.

And for the last 30 years or so, Stickle, of nearby Novato, California, has been as ingrained in Marin running culture as the race itself. For starters, this will be her 30th time running the race.

“I’ve been working on the race for 24 years, as a volunteer and on the board of directors,” adds Stickle, who is being inducted into the Dipsea Hall of Fame on June 10. “And for the last 16, I’ve been the race director.”

Bringing Organization to the Race

Stickle, who first raced the Dipsea 32 years ago – she didn’t start one year due to injury and dropped partway through another year due to health concerns – was first recruited to the race’s board of directors shortly after she had retired from a job in telecommunications.

“I actually put them off at first, because I was finally free to travel and all that,” she says. “But I realized I could help them get organized.”

She had identified some opportunities for improvement in the race organization, including their slow publication of results following the event.

“Organizing and planning has been my forte all my life,” says Stickle, who helped organize the 1984 Summer Olympics in Los Angeles. “I brought a lot of organization to the race over the years, including timely results, which was my bugaboo.”

“The fact she competes in a race that she directs is amazing in itself,” wrote Dave Albee, who serves on the Dipsea Board of Directors, in a recent press release. “She is … probably the most organized person I have ever met.”

For 16 years, as race director, Stickle has been charged with most race logistics, and has six chairs on the race’s board of directors reporting to her.

“Being [RD] has certainly cut into my training,” says Stickle, who regularly finished in the top 100 overall at the Dipsea before working for the race. “Now, when I should be training, that’s when the race is revving up. There are seven jurisdictions we deal with, and lots of meetings.”

She says the first-responder logistics are particularly stressful. “We have three standby ambulances, four Red Cross stations and search and rescue in place,” she says. “This is partly because the race is on treacherous terrain, but this is also a requirement that the National Parks Service and California State Parks put on us. It needs to be in place because safety comes first.” 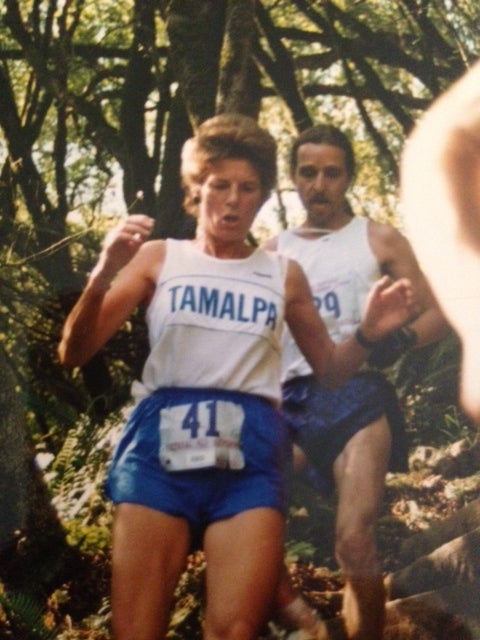 Stickle is a formidable runner – she once held the women’s 60-69 record at Alaska’s insanely technical Mount Marathon race – but she laments the fact that she never earned one of the prestigious black shirts (displaying a finisher’s place in large, silver numbers) given out to the top 35 Dipsea finishers.

She adds that a major draw to the Dipsea – for competitors of all stripes – is the race’s famous handicap, which gives many participants a head start based on gender and age. The result has been more equitable results, with the occasional duel for the win between an eight-year-old girl and a 68-year-old grandmother, as happened in 2010. (The former, fourth grader Reilly Johnson of Mill Valley, eked out the title.)

“There is also a certain feel to this race,” Stickle says. “It’s historical, it’s beautiful, but there’s something too that gets you hooked and makes you want to come back.

As for this year, Stickle says a knee injury has hampered her training a bit, but that she will race nonetheless, and enjoy her 30th trip to Stinson Beach as much as the previous 29.

“There’s nothing too special or different about this time,” she says. “I’ve never had a goal time.”