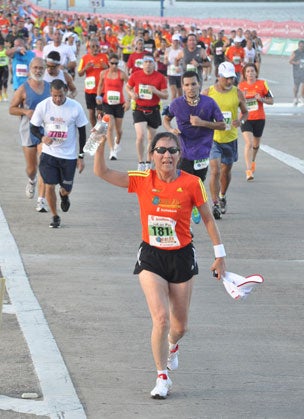 When we posted our Iceland Dream Trip Contest—an opportunity to win a trip to Iceland this summer to run the Laugavegur 55-kilometer ultramarathon—nearly 10,000 of you responded. We thank each and every one of you for your enthusiasm, and are pleased to announce the lucky winner:

Peebles, a recently retired federal agent with the Department of Homeland Security, is an avid runner. She was born in Taiwan and immigrated to the United States when she was nine years old. Though she’s never been to Iceland before, she has spent considerable time overseas; her husband Craig’s job brought their family to both Iran and Saudi Arabia to reside for stretches of time.

A mother of three and grandmother to two, Peebles began running marathons about a decade ago. Describing herself as “quickly addicted” after running her first marathon, she ran five more within the next year.

A fierce competitor, Peebles also plays tennis, races in road relays like the Baker-to-Vegas Challenge Cup and participates regularly in the World Police and Fire Games, where she competes in the half-marathon and biathlon alongside fellow law-enforcement officials. She’ll head to Belfast, Ireland, for the Games this year as well, just a few weeks after tackling her first ultramarathon at Laugavegur.

Says she, “I’ve never done an ultra before, but it’s always been on my bucket list. I’m very excited!”

A big thanks to our contest sponsors: