While he is frustrated by his 16-month layoff due to injury, the elite ultrarunner says he has learned a lot about himself and his running, and remains optimistic about racing this summer. 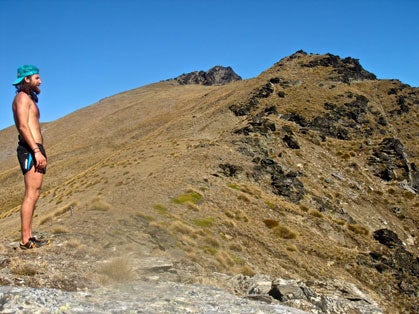 Most runners know what it’s like to deal with time away due to injury, and elite runners are no exception, but Colorado’s mountain man—known for twice winning the Leadville 100-Mile Endurance Run and finishing second at the now-famous 2010 Western States 100—has been completely absent from the ultra-trail racing scene since early in 2011.

The reason? A nagging shin injury that won’t go away.

Krupicka first noticed trouble in January 2011. “I was doing speed work to get ready for [Texas’] Rocky Raccoon 100-mile and I started having pain about three weeks before the race,” says Krupicka. “I ran the race carrying the injury, which obviously didn’t help things. I started taking lots of time off following Rocky, but was able to run little bits here and there through the spring.”

The diagnosis was medial-tibial stress syndrome—tendonitis in the shin. “It’s basically an aggravation of the posterior tibialis [which controls pronation] that then developed into periostitis,” he says. “That’s where the tendon lifts the periosteum, which is the sheath or membrane that encases the bone.”

Krupicka, who usually logs huge mileage in the mountains around Boulder, Colorado, says the source of the injury was easy to pinpoint.

“It was definitely an overuse injury. Getting ready for Rocky, I was increasing intensity without lowering volume,” he says. “But there were also some issues with my biomechanics. … Like many runners, I tend to have weak abductors and really tight adductors. These things contribute to my form breaking down and pronating excessively, especially as I fatigue on a longer run.”

He continues, “After a while, though, there was just a cycle of weakness and injury that was tough to break.”

Later that spring, Krupicka suffered a well-publicized (and more debilitating) injury when he tripped during a run, hyperextended his knee and fractured his fibula in the same leg. While he was not excited by the prospect of being immobilized with a broken leg, he figured it would at least force him to rest his ailing shin. But to his surprise—and chagrin—the time off did little for his tendonitis.

“When I began running again in early September, within five days or so, the shin flared right back up,” he says. “Being on crutches resulted in atrophy and weakness in that whole leg, even though I worked on those things with physical therapy.”

Dealing with time away

Krupicka’s health issues have, of course, affected his ability to race. “I’ve missed so many races that I would’ve liked to have been a part of—Western States 2011, UTMB 2011, San Francisco TNF 50 2011, Transvulcania, Zegama, etc.,” he says.

Krupicka says this is by far the longest he has ever dealt with a single injury. Not surprisingly, it has not come easily for the man who typically devotes hours each day to running in the mountains.

“I don’t deal with it very well,” he says. “The injury has added a level of stress that has affected all areas of my life, and it has required me to look at myself and my make-up and how I make myself happy and find meaning.”

In the end, the introspection, says Krupicka, has been a good thing.

“My perspective on movement in the mountains has changed considerably,” he says. “I’ve done a whole lot of speed or power hiking, which has expanded my notion of worthy ways of interacting with the mountains. Basically, though, I’m a less good person when I’m not able to run, and that shouldn’t necessarily be the case.”

On the mend
After nearly a year and a half of frustrations—and false race starts—Krupicka believes he finally has reason to be optimistic about his shin’s health. He also remains upbeat about his chances of racing some big events, including the Hardrock 100-Mile in July.

“Things have changed remarkably since I got back from Spain a couple of weeks ago,” he says. “While there, I received an examination and some analysis from Salomon’s team doctor and he was extremely in-depth and helpful, looking at the whole picture and making specific recommendations. And it seems to be working. The past week has been, by far, my best week of training in the past two years.

“So, if things hold together, I’m optimistic about running Hardrock in six weeks and I think I can be quite fit,” he continues. “I PR’ed on Mount Elbert [on May 31] and the last time I ran that I considered myself very fit, so things might be a lot of fun in the San Juans in July.”

Krupicka says if Hardrock goes well, he plans on racing the Pikes Peak Marathon and Nolan’s 14 in August, and hopes to travel to Europe for September’s Ultra Cavalls del Vent and October’s Le Grand Raid Reunion.

Still, he says, the injury has reminded him not to take anything for granted.

“It has re-opened my eyes to just how necessary the mountains are in my life and that I need to exercise better discipline in the future to avoid injuries,” he concludes. “Restraint and patience.”

Like a “Car with Good Gas Mileage,” Healthy Tendons Allow You to Waste Less Energy on the Run