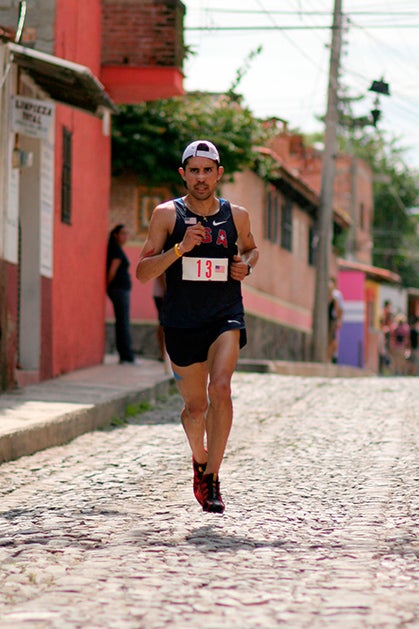 As a senior at Saint Mary’s College of California in Moraga, Mendoza broke the school’s cross-country record and finished fourth in the West Coast Conference cross-country championships after only four years of competitive running. After college, he moved to Bend, started running trails and met his current training partner, 31-year-old phenom Max King. (On September 11, King took home an American gold medal at the World Mountain Running Championship in Albania, and in late September, won two national titles in less than 24 hours: the XTERRA Trail Championships in Ogden, his fourth consecutive win there, and the USA 50K Trail Championships in Bend.) Despite Mendoza’s successes, his list of seconds to King’s wins is piling up. “We talk the same language,” says King. “I see a lot of potential in him.”

Mendoza and King talk a lot of friendly smack, too. During a training run one day, Mendoza said to King, “I’ll be able to beat you in a few years.” They turned it into a bet: If Mendoza can beat King in one quarter of the events in which they race over the next five years, King promises to wear a skirt for an entire year of racing. “I told him he’d better start looking for a cute skirt,” says Mendoza.

How are you going to win your bet with King?
It’s tough because he kicks my butt every day in training, but I just tell myself that a race is different and anything can happen. I don’t limit myself. I start each race thinking I can win. I’m still learning how to race and I’m improving every year, so chances are I’ll catch a break soon.

What is the biggest thing you’ve learned from training with King?
Put aside your fear of training too much. Max trains harder than anyone I know. He has shown me that sometimes it’s good to run on tired legs—my workouts are three times as long now and I do more hills.

Do you really run every day, twice a day?
Yes, it’s a personal preference and helps me handle my 90- to 100-mile weeks better. The only day I don’t run twice is Sunday, when I do a long run. I take a day off about every three to four weeks, usually after a hard race when I’m mentally drained.

Why do you enjoy trail racing?
You focus on competition more than pace, and I love its simplicity.

What is your advice for aspiring trail racers?
You’re not going to run fast if you don’t enjoy your training. Running is very simple. It’s just stress and recovery. You can do it many ways.

What do you do besides trail running?
I enjoy reading, backpacking and fishing. Bend has some of the best trout fishing in the nation; I never come home empty handed.

What is your favorite trail run?
The River Trail, on the southwest corner of town. It’s a super-soft trail, with views of the Cascades, rolling and winding along the Deschutes River.