Brooks Williams, 28, of Colorado Springs, Colorado, is hoofing his way out of the May Queen aid station, on his way to … 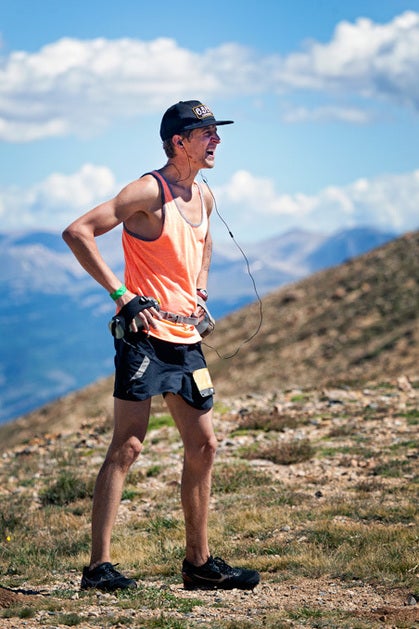 Brooks Williams, 28, of Colorado Springs, Colorado, is hoofing his way out of the May Queen aid station, on his way to the 11,071-foot summit of Sugarloaf Pass in Colorado’s 2011 Leadville Trail 100-Mile Run. It is the first major climb, less than 20 miles into the race, and Williams has just hacked up a wad of mucus that resembles an olive-green cinnamon gummy bear in both size and consistency.

The phlegm is an indicator of the infection that has permanent residence deep in his lungs. For the next 86 miles he will continue to cough up secretions, first in this gummy stage, then as something that resembles tapioca pudding and, finally, as common, stringy snot. Despite all sounds and appearances, the chest-rattling hacking is good for him: some of the mucus in his lungs is emptying.

When he was five-and-a-half-months old, Williams was diagnosed with cystic fibrosis (CF), a chronic life-threatening respiratory and digestive disease. Like most people with CF, Williams lives with varying degrees of decreased lung function, lung infection and nutritional problems.

“After he was diagnosed, we made sure he received the care he needed,” says Parks Williams, Brooks’ father. “He was an active child, and as a CF patient was in good health.”

But in 2005, Williams, then 21, contracted what could have been a fatal case of pneumonia, a common complication of cystic fibrosis because of the constant presence of mucus in the lungs. Williams recovered but was put on oxygen.

Carrying an oxygen canister from point A to point B, gasping for breath after walking across the room, Williams decided he’d had enough of just surviving with CF.

Williams, who had always been active but never really an athlete, began running regularly. His initial three- and four-mile town runs morphed into toothier trail outings up and down the Front Range.

Just a year after ditching the oxygen tank, he raced the grueling Pikes Peak Ascent, a trail half marathon that starts in Manitou Springs, Colorado, at 6,412 feet and finishes at Pikes Peaks’ 14,110-foot summit. It left him doubled over and barking as his lungs emptied. He was inspired. Next, with his longest training run clocking in at only 16 miles, he ran the American Discovery Trail Marathon, near Colorado Springs, in 3:21.54. Another trail marathon followed, and then a 50-miler.

“I had no idea what I was doing,” says Williams. “I just signed up and made myself finish them.”

That approach got him through his first three ultras, but his luck ran out in his fourth, and he wound up in a Minnesota emergency room after losing consciousness and falling into a ravine a half mile from the finish line of the 2009 50-mile Voyageur Trail Ultramarathon in Duluth.

First-place finisher Any Holak and then race director Rollie Everson rushed to Brooks’ assistance. “Brooks was pretty out of it, but he got up and was walking and really wanted to finish,” recalls Holak. “He was so close, I wanted to walk next to him to the finish line, but everyone told him it wasn’t a good idea.”

Brooks had improperly managed his hydration and salt intake during the race, leading to a severe case of hyponatremia, an imbalance of electrolytes in the body.

“I learned that I lose several times the amount of salt in my sweat as someone without CF,” says Williams. “After the disaster at Voyageur, my doctors helped me figure out my required hourly salt intake and balance while running. I haven’t had a serious scare since.”

During an ultra, the proper sodium intake for Williams is a whopping 2000 to 2500 milligrams of salt per hour—roughly one teaspoon every 60 minutes— that’s 24 times the U.S. Dietary Guidelines recommended daily sodium allowance. “I’m basically drinking saltwater, and it wrecks me,” says Williams. Race day he spends significant time in the bushes with his pants around his ankles.

Despite all of this: the difficulty breathing, the coughing, the infections, the electrolyte worries, the frequent bouts of diarrhea, Williams has completed more than 20 ultramarathons. He frequently lands in the top 10, and is becoming a regular contender on the podium with first-place finishes at the 2010 Blue Canyon 50-miler in Santa Barbara, California, and the 2011 Brew-to-Brew 44-miler, in Kansas City, Missouri, which benefited the Cystic Fibrosis Foundation.

On average, a healthy adult runner can fill and empty his or her lungs between 12 and 20 times per minute. But for CF sufferers, says Williams, a full breath is a much slower and more difficult process. “Imagine plugging your nose and breathing through a straw. Eventually you’ll get a full breath, but it takes a while.”

After winning Brew-to-Brew, the Cystic Fibrosis Foundation invited Williams to share some of his experiences with others battling the disease. And though Williams never intended to be a poster child for CF, by simply running, he has inspired the people and doctors who have supported him.

Says Louis Joline, Brew-to-Brew race director, “Brooks is out there not just running, or finishing, but running fast. He’s sending the message that running can be a lifesaver for everyone.”

Fifty years ago, the life expectancy for CF sufferers was less than 10 years. Today, advancements in diagnosis and treatment have increased the life expectancy to 37. Williams says he knows he won’t be ready to call it a life in nine years. “There is too much I want to do. I used to think CF made me disabled,” he says. “But I’ve changed that mentality.”

As he summited Sugarloaf Pass at Leadville this year, Williams’ mental state was positive, but physically his lung function was about 80-perecent of normal, healthy lungs. He was hurting, he says, but so was everyone else, and in the end, he still finished 19th out of 351 racers. Next year he is gunning for top 10.

“I don’t think I’ve come close to realizing my full potential,” he says. “This could be a life-long sport for me, and the reason I live to an old age.”