How two avid runners met, connected with and courted one another on the trails 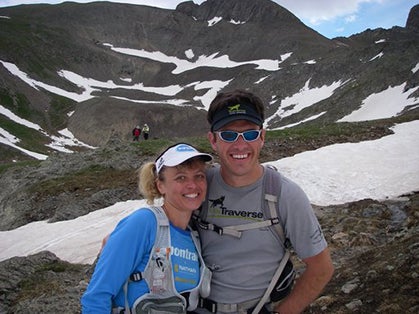 Editors’ Note: Happy Valentine’s Day, Trail Runner readers! This week, we share a story submitted to us by Olga King—originally for last June’s Blog Symposium—in response to the prompt “Tell about someone awesome you met on the trails.”

There are many awesome, special people whom life has allowed me to meet because I began trail running. The people who find their passion in this sport are incredible, and when you meet them, open your heart and share your pains (not just physical ones), the bond can last forever. I can list all the “famous” folks who have become wonderful friends over the last 12 years, I can list my crazy and committed running partners, but the most awesome person I have met is the one who chose to spend his life with me. And we met, quite literally, on the trails.

There is this little race, Zane Grey 50, that is my favorite of all 50s I’ve done. I had run it in 2006 and had an amazing time, proving to myself that I am good at exactly these kind of things—crazy tough races with terrain and elements that put many folks down. I decided to come back in 2007. There was this guy—Larry King—who read my blog, and introduced himself before the race. We shook hands, and then, at mile 3, he passed me. I passed him again at mile 25, and that was it, the history, a normal thing, a thing that happens to each of us every time we go on a trail.

We were both married at the time, and from time to time would check into each other’s blogs. Something he once wrote touched me, and it felt that he was seeking support during a dark time in his life. I was in my own dark days, so I reached out and told him to hold on. Turns out, there was a reason we felt such a sudden connection. Those dark times were of the same proportion for both of us; we both happened to be ending our respective 18-year marriages.

A few months passed by, and I came to check out a new great race in New Mexico, Jemez 50. The terrain and difficulty seemed to be right up my alley. When I arrived, who came to shake my hand again at a pre-race meeting but Larry.

The race began as always, with me holding my reins, slowly making my way through the field. Somewhere around mile 30 I came up on, yes, Larry! He was struggling with his energy and with his hip. I smiled and told him, “You better hang on to my skirt—don’t let me drop you again!”

And so we went, together, talking about our running, training, the trails, as well as about our families, former spouses, our kids. We talked about how it all affected us—and how we had no clue what to do next in our lives. We laughed, we gasped, we got lost. We took hundreds of photos, and we enjoyed the views, even as we pushed forward relentlessly.

Later, he emailed me to say, “Thanks for saving my behind.”I wrote back: “Anytime you want to see Oregon, come over and I’ll be your tour guide.” Two weeks later, he was on a flight to Portland. 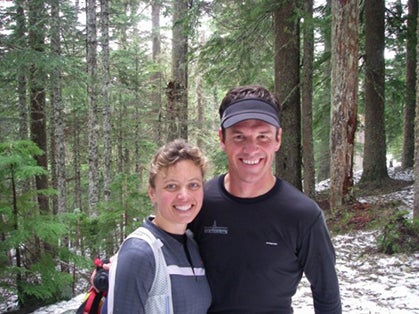 During their trail explorations that weekend in Oregon’s Columbia River Gorge, Olga and Larry met a passing hiker who snapped this photo of the two of them. Photo courtesy of Olga King.

There were many more trail meetings, because from that weekend on, we knew that our lives were meant to be together. We flew to races to run together, supported one another and explored new trails. At the 2008 Hardrock Hundred Endurance Run, I spent two weeks playing in the mountains and pacing my running partner Mike Bushwhacker. Larry visited for a weekend. I bought a map for the mountains that the course traverses, and had dozens of folks sign it for Larry. Most wrote something to the tune of, “Are you sure you know what you’re getting yourself into?” This map is cherished in our home, and so is the Hardrock 100, which served as my running highlight in 2009, with Larry pacing me.

The trails have never stopped being a part of our lives. In an interview last year for iRunFar.com, I said that what brings us close is not that we met on trails. It’s the fact that both of us love the trails, and what surrounds them—the solitude, the challenges, the beauty, the views, the camaraderie, the unknown, the simplicity, the nakedness of existence and sharpness of thoughts.

And so, it was no surprise that I was driving my car across the country in the heat of the summer of 2009 from Portland, Oregon, to Austin, Texas, and no surprise that the venue for our commitment to each other was, you guessed it, local trails. 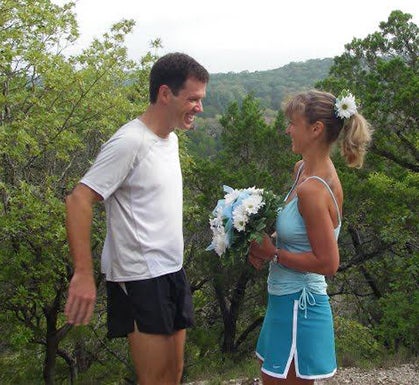 Getting hitched on the trails! Photo courtesy of Olga King.

There is nothing easy in life, but nothing that’s easy is what’s remembered or cherished. We have our challenges, and we work through them, together—me, and my awesome husband, who chooses to love me as I am and thinks I am pretty awesome as well.