A brush with death and return to the trails

Just one foot in front of the other,” I tell myself. I had repeated this mantra on Sunday, August 21, 2005, as I started the Pikes Peak … 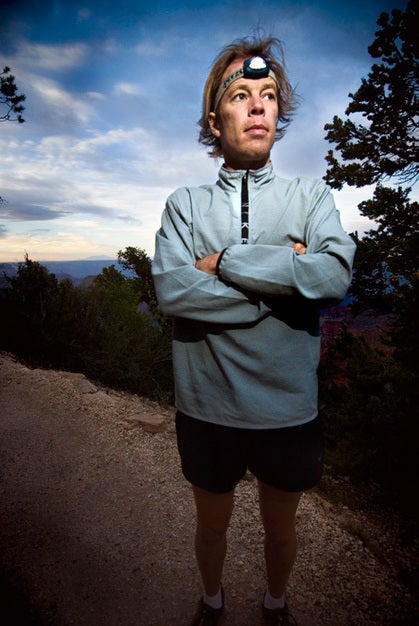 Just one foot in front of the other,” I tell myself. I had repeated this mantra on Sunday, August 21, 2005, as I started the Pikes Peak Marathon, which I wrote about for this magazine (March 2006, Issue 38). But, today is not Pikes Peak.

It is March 1, 2008. I am running, gimping actually, along one of my favorite trails that winds up three extinct volcanoes guarding the mesa west of Albuquerque, New Mexico. I have run this trail, with its miniscule elevation gain of 400 feet, in 40 minutes. Today, it will take me well over an hour.

On November 24, 2007, I invite a friend to run that same Albuquerque trail with me the following day. Around 3 a.m. that night, I am awakened by a noise outside my bedroom window. A man is attempting to steal my pick-up. I make a terrible mistake. I throw on my jeans and march to the door.

I flip on the porch light, fling open the door and, unwittingly, present my body as a target.

“Hey, get the hell away …” I don’t get to finish with “from my truck, you bastards.”

A man in a hooded sweatshirt pops up from behind the bed of the truck, parked 15 feet away. A rifle is at his shoulder. Fire rips from its muzzle. It roars. I duck to my left as the first bullet grazes my shoulder. The next bullet is a linebacker hitting me in the right thigh. Drilled into the cold, hardwood floor I screech, but utter not a word as I scramble to a knee, slam the door and lock it.

I stagger to my feet, slipping in my own blood, and step forward on my right leg. It collapses. The pain is foreign, a ball bat cracking the femur. I drag myself off of the floor and hop to my bedroom where I sit on the edge of the bed long enough to see the blood soaking my sheets. I slide to the floor with a splat as the warm sticky blood oozes across the floor.

My black jeans are shiny and shredded over my right leg. There is a smaller hole on the left leg. Breath comes heavily, groans emitting every second or third exhalation. I open the largest tear in my jeans—blood gurgles from a gaping crater of meat.

“Femoral,” I groan and jam three fingers up to the second knuckle into the hole clamping the femoral artery between my fingers and the heal of my hand. With the other hand I dial 911. My body grows colder, my vision diaphanous, life oozing out onto the floor. I wonder about the finish line for this race and how long I will have to suffer before reaching it.

The finish line is a trauma surgery suite where, two painfully conscious hours later, I stare up into fluorescent lights, with masked trauma surgeons looking down at me. Breathing drugs through a mask, I consider the triage nurse’s informed-consent warnings (death, amputation, transfusions, etc.) and wonder if I will awaken with both legs.

Euphoria. Theodore Roosevelt once said that there is nothing more exhilarating than being shot without consequence. I awaken in a recovery bay. Wires are connected to my chest and abdomen. IV needles puncture both arms. An oxygen tube tickles my nostrils. An electronic box chirps near my bed, but it seems far away.

Everything seems far away, especially the toes on my right foot … my right foot. I have a right foot. Tears well in my eyes. I blink, wiggle my toes. I smile and shake my head while laughter creeps from my belly, up my chest and out of my mouth. I laugh at my hands that are still covered in dried blood up to my wrists. I laugh despite my inability to pull my right foot toward me, and because of the anesthetics, the shock and the fact that I am safe, warm and not alone. I laugh because I am alive. It seems absurd.

Later that afternoon, my surgeon tells me that the bullet passed two to four millimeters from my femoral artery and missed my femur by six to eight millimeters. The bullet took out chunks of all four quadriceps muscles; the surgeons had to cut even more away.

The wound dressers arrive and remove gauze the thickness of a motel-room bible. Fear is a stone in my stomach. The entry wound is a clean hole about the size of a half-dollar. The exit wound is the diameter of a large coffee cup and half as deep. A white maggoty-looking thing curls at the bottom of the wound, cradled in bleeding flesh. I flex my thigh and the maggoty-looking thing tightens like a guitar string—it is a tendon. The wound dressers use a long Q-tip to jam wet gauze into the wounds then leave me with my thoughts and my morphine.

I cannot stand lying here. I click the morphine button once, twice, three times. I raise my bed, roll back the bedside table, and peek out of the small window in my door. The coast is clear of prying nurses. I lift my leg to the edge of the bed, slide my feet onto the cold tile floor and pray, to whatever gods will listen, that I can stand. I do stand—prayer answered—but then collapse back onto the bed contemplating the best way to break a running date when my excuse is that I was shot in the leg last night.

Tuesday. “Hmmm,” the nurse cogitates as she studies the display that shows how much morphine I am self-dispensing.

“I’m a little concerned that you’re not using your morphine. I’d expect you to be using a lot more,” she says.

“Maybe we should switch you to Oxycodone?” she wonders aloud. She leaves the room, and I blast morphine for the rest of the night—might as well get a little fun out of this deal.

The nurses and doctors are all about pain management. Several times a day they ask me about my pain. I am probably not the best guy to ask. I run trails for kicks, which means my tolerance for pain is high. Sure my leg hurts, it hurts like hell, but so did Pikes Peak and Alaska’s Mount Marathon and dozens of other races and training runs I have done over the past 30 years. I tire of the questions and start telling the nurses that on a scale of one to 10 the pain is five, always five—seems like a good enough number to score some Oxycodone to stash and use after long runs in the future.

Thursday. Released. The nurses bring a wheelchair to my door for my ride out. They leave. With the help of a cane, I quietly limp to the wheelchair. I break the plastic bracelet around my wrist that reads “Trauma alert Ocean,” which was the name they gave me while I was there. They try to keep gunshot victims anonymous for fear their shooters will try to find them in the hospital and finish the job. I throw the wristband onto the chair and, squaring my shoulders, limp to the elevators and out the door better off than when I arrived four days earlier.

On this first post-shooting run, it feels like a hot fork is being jabbed into the top of my patella, and golf balls are lodged in my abused thigh. My knee and Achilles tendons twinge as they compensate for their trashed teammates. My lungs burn. Every step hurts, like every single stride of the final 10 miles down Pike’s Peak.

There was a time when I might have cursed the pain. I would have wished my body to be stronger and tougher. But not now. Today, running in razor-sharp spring sunshine, I repeat the words “thank you” with each agonizing stride, grateful that I still have a right leg that can hurt. One foot in front of the other.