Evening had fallen, and Pete Ripmaster was alone in the Alaskan wilderness. He was 196 miles into a 1,000-mile Iditarod footrace and had come upon the most dangerous part. It was February 2016.

The passage was a 60-foot ice bridge spanning a river. Ripmaster could see where his competitors had gone—to the left and into thigh-deep open water.

“I was like, ‘That is not what I want to do right now,’” he says. The right side of the bridge looked doable so he cautiously proceeded, using his walking poles to probe the ice to test for stability.

Midway across, with his sled in tow and no waterproof clothing on, the bridge collapsed.

“I was completely under water—over my head. I popped up, got one breath and went back under and found a place to resurface—then I wiggled myself out.”

Within moments, everything on him had frozen.

“My sled had a layer of ice all around it,” he says. “My outer layer was frozen but my base layer wasn’t, so I knew I had a bit of time and if I ran, I could heat up that layer underneath.”

He sprinted four miles to the next check point—a lucky break in a race where check points are 50 to 100 miles apart.

Then, citing exhaustion, he quit—but not until 304 miles later.

From Mourning to Marathons

Ripmaster, a 41-year-old motivational speaker now of Asheville, North Carolina, played every sport he could while growing up in Ann Arbor Michigan. In high school, he was all state in football and baseball. His father ran everyday, but Ripmaster only experienced running as punishments in the sports he played.

After college at University of Kansas, Ripmaster started to follow in his father’s footsteps. Except, he wasn’t running. His father was a longtime alcoholic and Ripmaster was headed down the same path.

“I’ve dealt with depression most of my life,” he says. In 2000, when he was 24 years old, Ripmaster’s mother, to whom he was very close, died of breast cancer. As his mother was on her deathbed, he remembers telling her, “I’m going to do something in your honor.”

It took him eight years to figure out what that was, but, in 2008, he decided to run 50 marathons in 50 states to raise money for breast-cancer research. He had barely trained and says he “jogged and shuffled” his way through.

“Many times, I needed to walk the last miles in.”

“Just as I was finishing up the marathons, I got a call that my dad had gone off a cliff, drunk.”

After his dad’s death, Ripmaster went through an extremely dark period. He was guided through by his future wife, Kristen, and the trails.

Then, in 2014, he signed up for the 350-mile Iditarod footrace in Alaska. Having spent some time in the Alaskan wilderness previously, he figured he could muscle through it.

“I was in way over my head and I had a false sense of readiness because of all my ultras and marathons.”

In his 2014 race, Ripmaster’s sled weighed more than twice what it should have, and he went 25 miles off course while lost and developed toe-to-heel blisters on both feet. He finished last in over 10 days.

But he wanted more.

Ripmaster trains by running 50 to 60 miles per week with special attention to hip strength because of the strain that comes from pulling the sled. He also focuses on vertical gain—“hands-on-knees climbs,” he says. Other times, during training, Ripmaster will be spotted dragging a tractor tire around town.

Living in North Carolina, Ripmaster doesn’t have the chance to acclimate to the cold during training runs.

“The biggest factor in that race is the weather and knowing how to take care of yourself when you’re that cold.” he says, “You just have to know it’s going to be miserable. People ask me if I’m going to train by sitting in a restaurant walk-in freezer. I’m like, ‘No, that sounds horrible!’”

The Iditarod Trail Invitational 1,000-mile footrace is crazy enough to make veteran 100-mile runners ask what most people are asking them: “Why would you do that?”

The race consists of days and days of solo hiking/running while towing a sled with all your survival gear through the Alaskan wilderness in temps that dip to 30 below. The race is unsupported aside from checkpoints every 50 to 100 miles, where racers can purchase food, rent a room or pick up drop bags with supplies. It was the natural next step for Ripmaster. 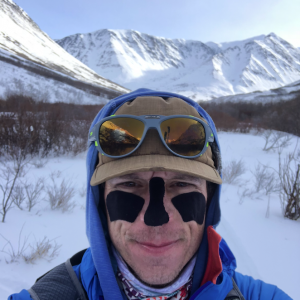 In 2017, the year following Ripmaster’s icy plunge, temperatures dropped to 60 below and race directors cancelled the race partway through.

“I had to go back to North Carolina, having to wait another year, and that just about did me in,” he says. Married and with two young daughters, Ripmaster is conflicted leaving his family for these extended races that are far away without communication.

He went into this year’s Iditarod physically stronger, mentally ready and knowing it was now or never.

“I have two strikes on me,” he thought. “Either you do it now or you’re going to have to put it off. I look back fondly at the two years that I failed the race because they were the stepping stones for getting here.”

The course showed little mercy, however.

“I was doing so much route finding because the wind was blowing the snow over and I was post-holing up to the knees,” he says. “Sometimes it was so cold and windy that I wouldn’t even take off my shoes when I got into my bivy sack.”

No one even feels bad for you because they think you’re an idiot.

The pain cave of the 1,000-mile race is different than with other ultramarathons.

“It’s a mental game,” he says. “It’s not like other ultras where people are clapping for you and there’s a spread of food. No one even feels bad for you because they think you’re an idiot.”

2019 will not see Ripmaster at the start line. Other than simple fun runs with friends, Ripmaster only plans to toe the line at this year’s Leadville Trail 100-miler in Colorado. Beyond that, he’ll be shifting his focus from organized ultra-racing to mountaineering and tackling new adventures, like running from Mount Pisgah to Mount Mitchell in North Carolina and climbing Denali and telemarking down.

As far as the Iditarod, “I’m done with it and that’s the best feeling,” he says. “After five hard years, I’m like, ‘I’m going to Hawaii with my family next year.’”

Five Workouts To Get You Race Day Ready

After Victory at JFK, The Sky’s The Limit For Adam Peterman