Dan Lehmann lives on a hillside above the small village of Helvetia, West Virginia—pop. 59—and maybe that’s why, unless you’re a local, you haven’t heard about his extensive trail-running exploits, race-directing acumen and down-home lifestyle. 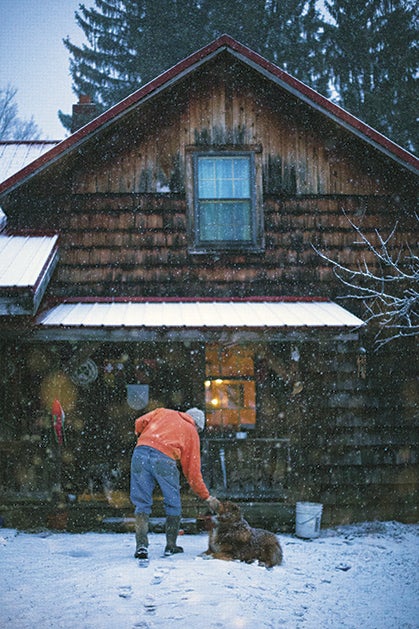 “That guy’s moving right along.”

We’re looking out the windscreen of a green diesel van, one that needed a jump to get started, one that is heading, in a roundabout way, to a trail race in Charleston. We’re looking at a coal truck—an “empty,” one of many—grinding its way out of the mountains in western Randolph County. These empties drive fast. Faster than most of you would were you to visit our state. This is West Virginia. The roads are steep and tortuous. The speed limits are high and the accidents are many. And the coal trucks drive fast. 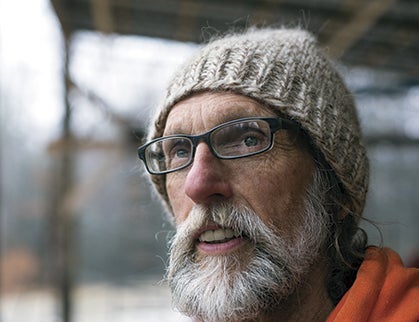 For our part, we’re keeping up. Dan Lehmann, 63, is driving the van, one hand on the wheel, the other tucked under his leg. It is cold: around 10 degrees. The snow has mostly stopped. We’re going east toward Mill Creek and the main road some 20 miles distant. It will take us 40 minutes to get that far. Though our destination is the Frozen Sasquatch 50K, in the opposite direction far to the southwest, we will circumnavigate, counter-clockwise, the central highlands of West Virginia. In its own roundabout way, our conversation circumnavigates the history that has brought Lehmann here to raise a family, work in the woods and found the West Virginia Mountain Trail Runners (WVMTR).

The latter is the reason we’re in the van. Lehmann founded WVMTR in January 2003 with four friends and his wife, Jody. He remains its president and most active member. In the 11 years between then and now, the club has grown from six to 330 members, from one to eight club-sponsored races, and donates its timing services to several 5Ks. Lehmann is always present and working. 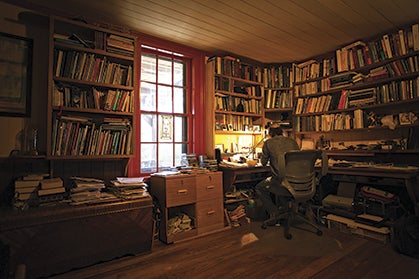 Locked into the hub of West Virginia Mountain Trail Runners–a corner office stacked to the ceiling with books–managing entries for the Highlands Sky 40-Mile Trail Run.

The race clock, Time Machine, two boxes of oranges and about 50 liters of soda are bouncing in the back. There are two boxes of WVMTR shirts back there too, soon to be three. We have to stop in Elkins to pick up this year’s order of club jackets from the screen printer. Lehmann is planning to run the first loop (25K) of the Sasquatch tomorrow. After finishing, he’ll take the timer’s chair from Jody to time the 50K.

Dan Lehmann came to running later in life, during a period of personal turmoil. In 1997, he ran his first trail race, the Spring Creek Memorial, while visiting his brother in Steamboat Springs, Colorado. In 1998, he and Jody founded the Helvetia 10K Mountain Run. In 1999, he ran his first ultra. By then the seed of an idea had lodged. 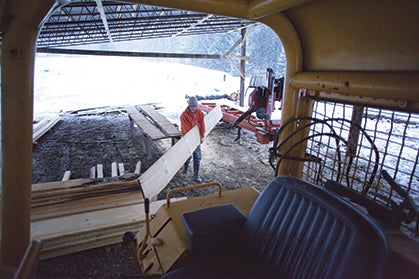 Cutting big boards is a luxury of having your own mill. Here Lehmann stacks 18-inch x 12-foot pine boards.

“I like people a lot. I love running. And, as corny as it sounds, I thought I wanted to share, I guess, Helvetia a little bit,” says Lehmann. “In ’98 definitely, I wanted people to come to Helvetia.”

Lehmann’s speech canters along. The excitement of discovering each thought sparks in his inflection.

“But by ’03, I wanted something, you know, much broader. Five years had passed. I mean we can keep doing this race, but we could start some other races.”

So he started Highlands Sky 40M Trail Run as the club’s first ultra and a way to share West Virginia with the outside world.

It is hard to get around this state. That much is clear from the rumbling van. The mountains are no longer tall, nor are they straightforward. They are rumpled and folded like a well-worn quilt, with tight, dark hollers and enough rain that you know how they got that way. This topography isolates the state politically, socially and economically, but it makes for a pretty rugged race course. 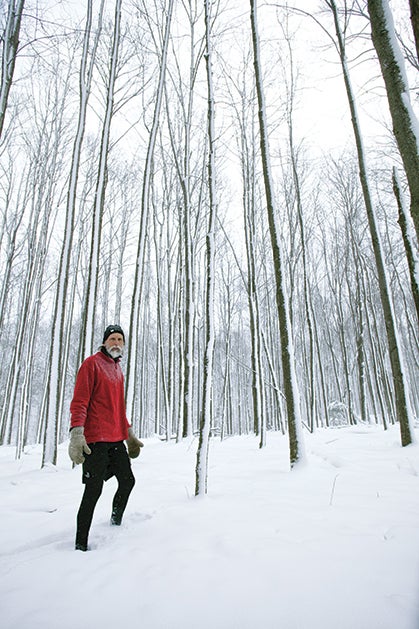 Lehmann in a young copse of maple and poplar. Much of Helvetia, formerly pasture lands, is growing up into timber.

Just yesterday we were sitting in the old, original part of Lehmann’s house watching Highlands Sky entries roll in, with almost 50 in the first two days. Houses, in West Virginia, grow organically. When Lehmann bought his 40 acres, there was a two-story, four-room house. Handmade timber-framed additions grew along with his family, each room encircling the previous in its warm oaken embrace.

His desk sits wedged into a corner, his computer dwarfed by floor-to-ceiling bookshelves. Books range from Stegner’s Angle of Repose to Noakes’ The Lore of Running. A hunk of polished glass, a nearly black shade of green, reads: October 2010–DEP Employee of the Month—Daniel Lehmann. Though trained as a forester, Lehmann spent 31 years working for the Department of Environmental Protection inspecting mine holding ponds and waterways. The job enabled Lehmann to move back to Helvetia with Heidi, his first wife, who was born there. It also enabled him to spend his working life outdoors. 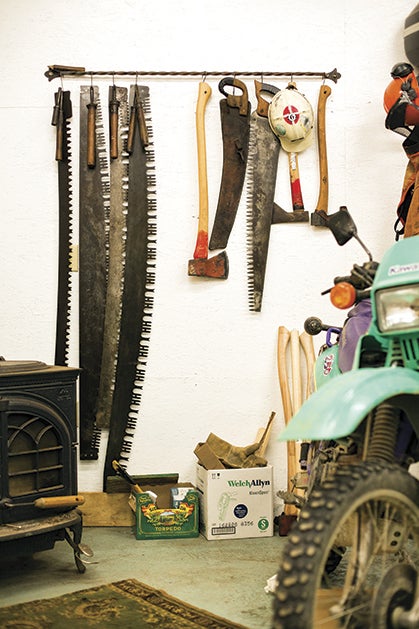 Tools of the trade.

The phone rings. It’s Bill Potts, one of the current WVMTR board members. Potts, originally from Gassaway, now lives in Charlottesville, Virginia. The two men banter about the holidays, running, and—the real reason for the call—pouring concrete. Lehmann has a bit of experience with the stuff, from building his own man-shed (for his crosscut saws, power saws and enduro bikes) to inspecting the local limestone mine in aptly named Aggregates, West Virginia. Their good-natured ribbing is punctuated with bull floats and power trowels. “Oh,” Lehmann concludes only part in jest, “we gotta go saw a few logs, drink some beers and shoot some pistols.”

We head out the door and down the driveway into a cold rain. Lehmann has several large logs waiting to be cut and a band sawmill for the job. He hops on a small, orange tractor to position the first log. Even bundled-up with extra layers, Lehmann doesn’t present the hefty silhouette of a local. He is a true ecto-morph: a runner in lumberjack clothes.

“I’m getting smarter about how I do things. Or I’m getting older.” He winches the first log, a 24-inch white pine onto the mill. “Sometimes it’s nice to do these things by yourself.” The distant smile on his face knows the rain will soon turn to snow. Then, snapping back to the present mist-shrouded moment, “But not things like this [sawing logs] or pouring concrete, like Bill Potts. These are better with friends.”

The motor winds up and we turn to the task at hand. 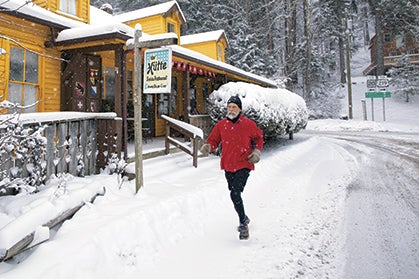 It is morning. We are slipping in a run before our drive to the Sasquatch. We are also slipping in about 8 inches of snow at 8 degrees. We have run the two miles from Lehmann’s house downhill to the sleepy village of Helvetia, tracing the 10K race course backwards from mile 4 to mile 2. Willie, 34, is Lehmann’s oldest son. He and his step-brother Brian own Mountain State Brewing Company in Thomas, West Virginia. When Willie visits, he stays in his late-grandmother’s old house. We let ourselves in. He is not there.

“He’s probably at the restaurant drinking coffee with Henry.” We stop into the Hütte Swiss Restaurant in the center of the town.

“Dan? You aren’t out running today, are you?” gasps Debbie Sayre, the cook. The wood stoves are roaring. “My garsh, Dan! You’ll take pneumonia, getting’ hot an’ breathin’ all that cool air!” Willie is not here either.

Eleanor Mailloux, Willie’s grandmother, owned and operated the Hütte until she died in 2011 at the age of 93. If Helvetia is indeed on the map, it was Eleanor who put it there. She was the upstart, feisty character who started the restaurant, the Beekeeper Inn, the Cheese Haus. It was her idea to market the town with fairs and festivals, including the Fall Festival featuring Lehmann’s 10K Mountain Race. Mailloux was also the town’s connection to Guam, though not intentionally. Her husband retired there. She wouldn’t follow.

The Hütte is festooned with tiny red flags each featuring the white cross of the homeland Helvetia—what the Swiss call Switzerland. At the corner, Mailloux planted a sign with the words: “You have arrived.” We have, in fact, arrived at a town of 59 people (2010 Census), but we still haven’t found Willie.

Willie co-owns the restaurant with his mother, Heidi, and three cousins, including Henry. We finally locate Willie, at Henry’s house, just up the street. The two tall Helvetians are sitting around the wood stove drinking coffee and eating cookies. “Want a cookie?” Willie asks, “They’re Dutch cocoa.” 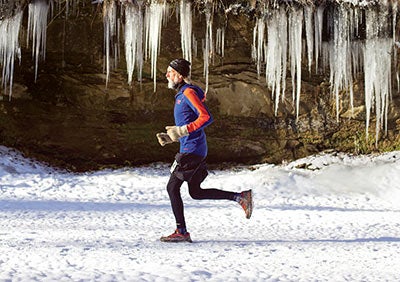 Fueled by Dutch Cocoa and family stories, we amble uphill out of Helvetia,. When we arrive back at the house, Jody has finished feeding the horses and Lara, Lehmann’s youngest daughter, is just rousing. She had a snow day from school. We pack the van and jump the motor. Jody and Lara will follow later that night. The van rumbles back down the two miles to town. We drop in on Clara, Lehmann’s oldest daughter, her husband, Jonathan, and their newborn twins. Clara is off to town on errands leaving Jonathan and the girls to nap at home. Of Lehmann’s five children, three of them live in Helvetia.

The green van winds its way out of Helvetia, past Sugar Grove Road, past the coal-washing plant at Star Bridge, past Don Olson’s sugarbush in Blue Rock. I quiz Dan about his running history and why he wanted to start a club. Several miles into our conversation he quips, “Did I ever tell you that, when I was in my first year of college, I didn’t know exactly what I wanted to do? I took one of those interest tests.

“‘Dan, your interests seem to be in outdoors,’ the counselor commented. ‘Or being a minister!’

“I was going, ‘What?! A minister?!’ She said something about working with people, but it just floored me ’cause I was thinking: church, priest or something like that. I was 20 years old. Ahh, that’s not me!

“But in a weird sort of way my life’s kinda like that, you know: preaching the gospel of the dirt track.”

As we drive out of the mountains through the small towns dotting the road from Helvetia, the sun emerges through a parting of the storm clouds. The towns look quaint, the way people think of New England in winter. I realize that we’re mapping locations, tracing a route, connecting dots.

Dan Lehmann has organized races and runs in all of these places we pass through. Radiating outward from Helvetia, he has defined his place in these hilly environs. If we marked a map for every run or race that he has organized, we would have a dense spider web of ink. The town names and counties would all be obscured. Absorbed in the running memory of one person, but shared with many. And, like the character himself, the feelers of our graphic running history would be ever extending, ever inclusive. Come. Share what we have. You are welcome here.

Joel Wolpert is the creative force behind The Wolpertinger, a film and photography production company based in the hollers near Belington, West Virginia.

This article originally appeared in our April 2014/DIRT issue.