A close family friend once told me, “If you don’t fail at something at least once, then you haven’t set your goals high enough.” 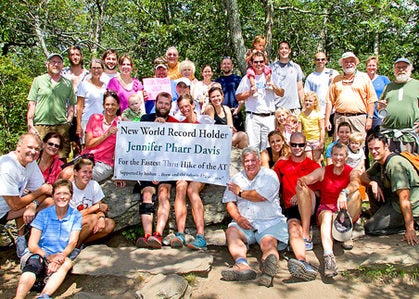 Jennifer Pharr Davis is an ultra-runner and long distance hiker. She has completed over 11,000 miles on Long Distance Trails and she has traveled and hiked on six different continents. In the United States, Pharr Davis has completed the Appalachian Trail, Pacific Creset Trail, Long Trail, and Colorado Trail. In 2008, she became the fastest woman to travel the Appalachian Trail by finishing her trek in 57 days. This past summer, Pharr Davis went back to the trail and, with the help of her husband, she set the overall record, completing the journey in 46 days, 11 hours,  20 minutes—an averaging 46.93 miles per day.

A close family friend once told me, “If you don’t fail at something at least once, then you haven’t set your goals high enough.” I realized that failure was a huge possibility in returning to the Appalachian Trail (AT) for the overall record. And I didn’t care.

I hated the idea of not trying far more than the thought of not succeeding. I had finished my last AT hike with gas left in the tank, and no matter where my hike ended in 2011, I promised myself that I would leave the trail empty, unable to take another step. I wanted to know what it felt like to give 100 percent.

One day on a record attempt feels like an eternity. I told myself that the first two weeks of the trip would be the most painful fourteen days of my life. I was right.

The first four days of the trip were extremely difficult. My body was trying to cope with all the dull aches and sharp pains that come at the beginning. The bottom of my feet stung with each step, but I expected this. I knew that if I could work through it, I would then develop the desired numbness below my ankles that would last for the rest of the hike.

Despite the initial pain, I loved being back on the AT. The path felt familiar, and each day I looked forward to the upcoming terrain. On the morning of the fourth day, I was able to do something that I had always wanted to do. I forded the Kennebec. The wide river has a canoe ferry to help hikers across the fast-moving torrents – and for good reason. But with the help of my good friend and 16-time AT veteran, Warren Doyle, I crossed the river on foot. The water was chest high and even though the endeavor demanded a high level of exertion, I experienced a burst of energy upon reaching the opposite shore. I was experiencing the trail in a new way and I loved it.

I loved it, until day five, when I developed shin splints. I had never experienced shin splints before, and the pain was so intense that I was convinced I had stress fractures in both legs. Every step hurt. At times my legs would buckle beneath me, unable to support my weight. My hiking poles became crutches, and there were several times when I hiked down the trail sobbing because of the unbearable sensation in my lower legs. I knew that former record-holders had worked through shin splints, and I decided that I would try to do the same, at least until I was forced to crawl.

My shin splints stayed with me throughout the White Mountains, where I faced two straight days of sleet and rain. I fell countless times on the slick rocks, and at one point I looked at my leg and discovered there was more blue and purple than tan. When I finally reached Vermont hoping that softer terrain would heal my legs, I contracted a violent illness that forced me off-trail and into the bushes every half-mile. My body had not adapted to the challenge. I thought I was done.

When I arrived at the base of Killington Peak, I looked up at my loving, caring, sympathetic husband with puppy-dog eyes.

“Honey, (I decided to soften him up with a sweet moniker) I don’t think I can do this.” I said. “My body is rejecting the challenge. It just feels like I am physically falling apart.”

Then Brew, who believed in a life with balance and hikes that included naps and meditation, looked into my weepy eyes and said, “You can’t quit. Not now.” He kept going, and I heard what he was saying, but I couldn’t get past the first three words.

I couldn’t believe my ears. I had expected Brew to coddle and comfort me, not to tell me to keep hiking. It was so contrary to his personality and demeanor that it made me realize how much he believed in me. Brew knew how much this opportunity meant to me, and even though we were 1700 miles away from Springer Mountain, the end of the trail heading south, and I was suffering from shin splints and diarrhea, he still believed that I could set the record.

I left the road and slowly, painfully, made my way toward the top of Killington Peak. Once I reached the other side of the mountain, there was no looking back. Brew’s belief had rekindled my desire to set the record. The trail had taken away any sense of pride or false notion that I could do this on my own. I knew that I could not be successful without Brew, and we would only achieve our goal with the help of others.

Just south of Vermont, the terrain and weather became more agreeable and my shin splints finally started to subside, though it took over 1000 miles for the pain to fully go away.

Our daily routine consisted of waking up at 4:45 a.m., begin hiking at 5 a.m. and then continue hiking for the next 16 to 17 hours. My intermittent breaks came at the road crossings where I met Brew. However, it was not a time to relax. Instead, it was my job to ingest as many calories as possible, bandage any problem blisters, ice my shins, and then get back on the trail as soon as possible. I would continue hiking until 9 or 10 p.m. when I came to a good camping site or road crossing. There I would quickly try to eat dinner, wipe down my limbs with Wet Ones, and then crawl into my sleeping bag for six hours of sleep. And sometimes those six hours were too much.

Brew woke up one night to find me pawing at the door of the tent.

“What are you doing?” he asked.

“I gotta find the trail.” I said. Then I continued to try and escape.

Brew put his hand on my and started shaking me, “Where are you going? It’s night time, it’s not time to hike.”

Finally, I awoke from my dream , a dream where I was trying desperately to find the trail. After that, I was never allowed to take a nighttime bathroom visit without an inquisition.

From the very beginning, the numbers were overwhelming. Talk of “miles per hour” and “daily averages” psyched me out. We occasionally talked about where Andrew Thompson (the former AT record-holder) would be relative to our location, but that didn’t motivate me either. Andrew is a great person and amazing athlete, worthy of a trail record. Even when I tried to vilify him in my mind, it still didn’t inspire me. The trail record wasn’t about numbers or about beating Andrew Thompson; it was about doing my best. That became our mantra. Whenever I left the car at a road crossing, Brew would yell after me, “just do your best.”

Brew and I worked together as one unit, and I have never in my life trusted someone so completely. We also benefited from the invaluable support of numerous friends that assisted us along the trail: some provided food, others helped with logistics, and some hiked with me and “muled” for me (aka, carried my pack).

The closer we got to North Carolina—my home state—the more support we received. Because I wasn’t running at all, a wide variety of people were able to hike with me on the trail: both of my brothers, two retirees, several previous thru-hikers, and a handful of trail runners. I even had the opportunity to hike with two of my trail heroes, Anne Lundblad and Matt Kirk. The fact that individuals who I believed to be superhuman were coming to the trail to hike with me was both humbling and encouraging.

Toward the end of the hike it felt as if I were straining for a goal that was much larger and more involved than I had ever imagined. I wasn’t just hiking for myself anymore. I was hiking for a community that believed in defying the odds, striving for your fullest potential, and helping one another. I was hiking to promote a path that has the power to positively change and impact lives. I was still hiking for Meredith – the young woman who lost her life on Blood Mountain, but in turn brought Gary Michael Hilton – the man accused of four backcountry murders in the southeast – to justice. And I was hiking because it had become of symbol of my husband’s sacrificial love for me.

Reaching the top of Springer Mountain, hand in hand with Brew, was one of the most amazing moments in my entire life. Even at the finish, after I set the new record of 46 Days, 11 Hours, 20 Minutes, the experience was not about the numbers. It was about the memories and friendships we built along the way.

Walking back down the mountain I stumbled down the trail, tripping on roots, stubbing my toes on rocks, and struggling to put one foot in front of the other. I was so tired that the path blurred in front of me.

I smiled. So this is what 100 percent feels like.