The suffering starts before the start

Occasionally I write a column with a little humor … 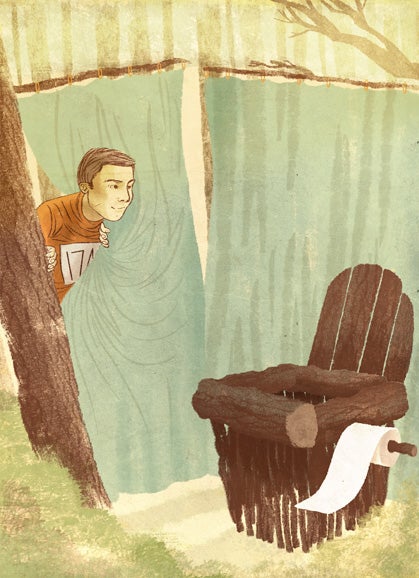 Occasionally I write a column with a little humor in it and people start thinking I’m humorous. Nothing could be further from the truth. I’m a nervous wreck.

Before a race, I just pretend to have a good time, grinning passively between bits of small talk while nervously watching the minutes tick away, waiting for a potty door to open.

After maintaining a race-per-weekend average for over seven years, I am frazzled, and convinced many race directors are closet sadists. There never seem to be enough toilets. Week after week, it’s the same: no toilets, and all the pictures of me running display a ghastly grimace.

It takes a guy about a minute to pee under good conditions (daylight). It takes a girl about five minutes for the same operation, mainly because she spends the first three minutes cleaning the toilet seat the guys just peed all over. She also has to lay down toilet paper shelving to sit on before she can get to the business at hand, like getting even by using all the toilet paper.

To empty their bowels, both sexes will likely need at least three minutes and possibly as many as 10 if wearing snowshoes, or if this is the time they use to pin their car keys into their shorts pockets, put on their race numbers or read the daily papers.

When a race has a thousand people, and everyone needs approximately five minutes of use, how many toilets do you need? If you said one, congratulations, you’re race-director material.

I once entered a marathon where we had to take a bus to the start, in the middle of the desert. From the window seat, I could see a truckload of potties parked at McDonalds and I thought to myself, “Man, I sure hope those aren’t ours!”

After a bouncy 45-minute bus ride, we arrived at the start area a half hour before race time. Not one potty in sight, nothing but flat desert for a mile in any direction, except for the parked policeman. We all stared at each other in disbelief as more buses arrived.

Sure enough, the truckload of potties that had been sitting at McDonalds arrived about 15 minutes before race time. It took another five minutes to unload one toilet. Five minutes before the start, two potties were ready. About 200 people were waiting in line when the race director shouted, “Last call! We’re starting in two minutes!”

Panicked, I crouched beside the front wheel of the potty truck opposite the police escort, pretending to tie my shoe while my backpack was strategically placed to hide the fact I was peeing. No hope for number two.

My only thought while leading the first five miles of the race was, “I can hold it, I can hold it…” Then we headed downhill and all thoughts changed to, “I can’t hold it!”

When my sphincter had all it could take, I dove behind the only cover in sight, a tiny sagebrush at mile eight, and dropped trow in front of everyone in sight. (Just shoot me.)

Have you ever had to do that in the middle of a race in front of hundreds of competitors? My best suggestion is never leave home without a wad of toilet paper.

Over the years I’ve seen and heard your stories, too. Some runners arrive hours before the race to make time. Some people wear ponchos or space blankets, and crouch inconspicuously. Some runners have secret bathrooms near race starts and guard the information like national security. Some runners hide behind the same trees, year after year. Some keep designated pee bottles and use them in their parked cars. Some runners do long “warm-up runs” in the nearby woods and alleys. Some runners rent rooms at the start line. Some runners squat in plain view of everyone. And some runners are able to pee on the run, even when it’s not raining.

While I can sympathize with race directors trying to save money, toilet access is wreaking havoc on our plumbing. It’s not supposed to be a sufferfest even before we start. If you’re a race director, please provide more toilets. Think of the smiling pictures.

Bernie once peed in a car-wash drain and was nearly arrested for urinating in public.