The fires have halted races, shut down trails and lowered air quality 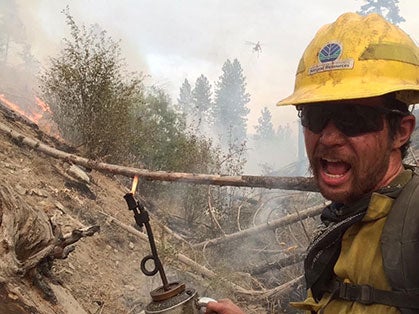 Aaron Poh, a trail runner and firefighter in Washington State, fights a blaze earlier this summer. An exceptional wildfire season in Washington and surrounding states has impacted trail running in the area. Photo courtesy of Daniel Probst

This summer has been one of the worst wildfire seasons on record in the western United States. In and around Washington State, many of those fires have occurred on or near major trail networks, leading to race cancellations and trail closures.

The Angels Staircase 60K/35K, a trail race in north-central Washington that tops out at 8,000 feet and offers views of the North Cascades, was scheduled for August 8 and 9. But the race was cancelled—for the second straight year—when a wildfire tore through a section of Okanogan-Wenatchee National Forest, coming within six miles of the racecourse.

The blaze, known as the Wolverine Creek Fire, had been started by a lightning strike over a month earlier, on June 29.

“The fire grew from 600 acres to over 16,000 acres in 48 hours about a week prior to our race weekend,” says Matt Stebbins of Rainshadow Running, which organizes the event. “Given the poor air quality and the proximity of the fire, we decided to cancel Angels Staircase, because we care more about the safety of our runners and volunteers than we do about any race.” Entrants can opt to donate half of their race fee to fire-relief efforts; otherwise, the fee can be credited to a future race.

In nearby Plain, Washington, the Cascade Running Club had to cancel its race, the Plain 100, due to the Forest Service’s closure of the eastern section of Okanagon-Wenatchee National Forest, where the Wolverine Creek and Chelan Complex fires burn. “For us it’s a really big deal,” said club member Tom Ripley.

A short distance to the northeast, in the Loup Loup Ski Bowl, organizers of the Ragnar Trail Cascades relay, set to take place on September 11 and 12, faced a similar dilemma last week, when a cluster of fires dubbed the Okanogan Complex came within a half-mile of one of the course’s trail loops. The Okanogan Complex was ignited by lightning on August 14 near Omak, Washington, and has since burned more acreage than any other wildfire complex in recorded Washington State history.

Earlier this week, Ragnar made the tough decision to cancel the event. “The situation here is quite dire,” says Tanner Bell, president of Ragnar Relays. “We were certainly concerned about participant health and safety, and also weighed community needs. The race brings money into the community, which is especially needed now as they battle these fires.”

Like Rainshadow organizers, Bell and his colleagues at Ragnar plan to help the community through “donations and some sort of financial give-back.”

Other area races that could be impacted by the fires include the Volcanic 50, set to take place on Saturday around the base of Mount St. Helens, roughly 70 miles from where the Cougar Creek fire is burning on Mount Adams; the Pine to Palm 100, also scheduled for this weekend; and the Idaho Mountain Trail Ultra Festival in McCall, Idaho, on September 19 and 20.

Officials don’t yet have an estimate of how many miles of trail in national and state forests have been harmed. Many trails—including sections of the Pacific Crest Trail in northern Oregon—have been closed.

Even where trails remain safe and intact, the impact of the fires has made running difficult. Yassine Diboun, an elite ultrarunner based in Portland, Oregon, describes the area’s air quality as some of the worst he has ever experienced. “The smoke is very disorienting,” he says. “It burns your eyes and throat, and can be very harmful for your lungs.”

Members of the Cascade Mountain Runners, a trail-running group based in Bellingham, Washington, have felt the effects of the fires on multiple levels. “The fires stretched all the way down from the Cascades to the Bay,” says club founder Daniel Probst. “Fires burned in places you’d never expect—even on one of the islands in Bellingham Bay. On some days the visibility dropped to less than a mile.”

The extreme weather events in the area have not been limited to wildfires. On Saturday, the Cascades experienced severe rain and wind, which caused additional trail closures due to flooding, fallen tree branches and other debris. The monsoon-like storm coincided with the Cascade Crest 100-mile Endurance Run, which took place on Saturday and Sunday. High winds and pouring rain littered the trail with branches, sent racers shivering into aid stations and led to one of the highest DNF rates in the race’s history.

Some area trail runners are, understandably, not so focused on trail running right now. Cascade Mountain Runner Aaron Poh, for instance, cut his race season short in early June to start a new job with the fire crew at the Washington State Department of Natural Resources. He has been fighting fires all summer.

“I’ve enjoyed the combination of adventure and hard work,” says Poh. “With this job comes a lot of hiking, often carrying a heavy pack up and down steep terrain. It’s a great way for me to recover from some minor injuries I’ve incurred on long runs, and help build up my legs and core muscles. Now that the season is wrapping up, I’m excited to be running the trails at home—without my boots or pack on.”

Diboun stresses that canceled races and unpleasant trail runs are the least of the local community’s worries, with people’s lives, homes and livelihoods at stake. He adds that trail runners all over the country have a role to play. (For those interested in helping out the fire-relief efforts, a blog post Diboun wrote for his coaching service, Animal Athletics, lists a number of organizations currently accepting donations.)

“I think the trail-running community is a group of folks that loves the land and hates to see our wilderness on fire,” Diboun says. “We band together in so many ways, and this is another example of how we can rally to be part of the solution.”

Correction: This article originally stated that the 2015 Angels Staircase 65K and 35K had been scheduled for August 5, not August 8 and 9.