The champion ultrarunner finished with three hours to spare 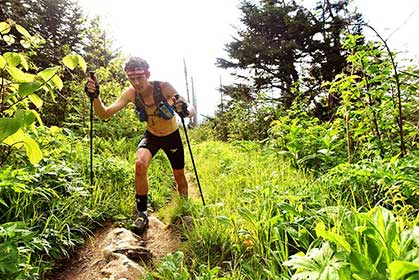 Jurek on day five of the attempt. Photo by Luis Escobar

Decorated ultrarunner Scott Jurek has set a new Fastest Known Time (FKT) on the 2,180-mile Appalachian Trail. Jurek, 41, reached the summit of Maine’s 5,270-foot Mount Katahdin, the northernmost point on the trail, at 2:03 p.m. yesterday, for a time of 46 days 8 hours 7 minutes. The previous FKT was 46 days 11 hours and 20 minutes, set by Jennifer Pharr Davis in 2011.

“While a main goal is to complete the trail in record time,” Jurek said in a press release before embarking on the AT, he primarily hoped ” to inspire others to explore the outdoors and their own personal and life goals.”

For the past month and a half, Jurek averaged 47.2 miles per day. His initial time goal, according to a press release by Ultimate Direction, one of Jurek’s sponsors, was 42 days. But his pace was slowed by an early knee injury and one of the rainiest Junes in Vermont’s history.

“I dreamed of getting to the top of Katahdin,” Jurek wrote on his Facebook page after the attempt. “After 46 days, 8 hours and 7 minutes it was a reality and the feeling was unlike anything I’ve experienced. The path takes us places we never imagine.”

Jurek, one of the best ultrarunners of his generation, is perhaps most famous for winning the 100-mile Western States Endurance Run every year between 1999 and 2005, as well as the all-vegan diet he adheres to.