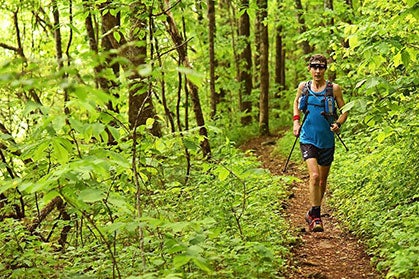 Jurek approaching Unicoi Gap, Georgia, on day one of his Appalachian Trail run. He ended the day at Unicoi, mile 52.9. Photo by Luis Escobar

Accomplished trail runner Scott Jurek is closing in on a new speed record for completing the Appalachian Trail, or AT.

Yesterday, on day 36 of his 2,200-mile journey, Jurek crossed into New Hampshire. As of today, Jurek is within 400 miles of the trail’s endpoint, Maine’s Mount Katahdin. If he reaches Katahdin before 5:16 p.m. on Sunday, July 12—which seems likely, given his pace—he will best the current Fastest Known Time (FKT), 46 days 11 hours 20 minutes, set by Jennifer Pharr Davis in 2011. (According to a June 25 press release from Ultimate Direction, one of Jurek’s sponsors, he is expected to finish in 42 days.)

Jurek, 41, is considered one of the most successful ultrarunners in the sport’s history. During his prime, he won some of the country’s toughest ultras, including the Hardrock Hundred (2007), the Badwater Ultramarathon (2005, 2006) and, most notably, the Western States 100 Mile Endurance Run, which he won every year from 1999 to 2005. Jurek is also famous for the vegan diet he has adhered to since 1999, as documented in his best-selling memoir, Eat & Run. 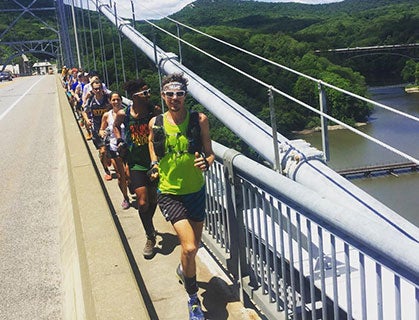 Jurek leads a long line of supporters over the Hudson River on Day 29. Photo by Jenny Jurek

Jurek began his AT run at 5:56 a.m. on May 27, starting at Georgia’s Springer Mountain, the trail’s southern terminus. Through daily, much-shared Facebook posts, Jurek has kept his many followers up-to-date. He has enjoyed the company of fans and friends in person—including well-known trail runners Karl Meltzer and Rickey Gates—and many of them have joined in for a couple of miles.

Throughout, Jurek’s wife, Jenny, has been crewing for him. “Without her,” Jurek wrote in a June 25 post, “this journey would be impossible. She is my lifeline and makes sure this ship keeps heading north. Jenny inspires me to keep putting one foot in front of the other when it seems impossible.”

In addition to the usual difficulties any AT thru-runner faces—including extreme weather, rocky, rooty terrain, some 515,000 feet of elevation gain and the general wear and tear of logging big miles day after day—Jurek has had to overcome a severe left quad strain that developed in week one while in the Smoky Mountains that straddle North Carolina and Tennessee, and, more recently, an unusually soggy Vermont, which was experiencing its rainiest June in 130 years.

Jurek has referred to the AT project as his “masterpiece,” posting on his Facebook that “it’s something I’ve always wanted to do.”