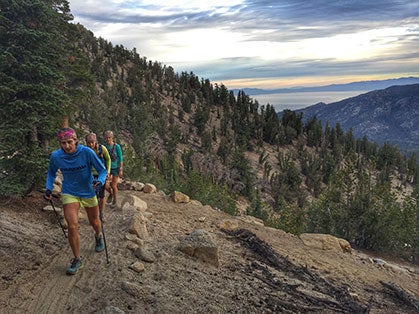 Moehl and pacers Darcy Piceu and Monica Ochs near Monument Pass at daybreak on day two. Photo by Gina Lucrezi

Moehl, 37, of Boulder, Colorado, set out from the Big Meadow trailhead south of Lake Tahoe on Monday, and headed clockwise around the 165-mile loop trail.

The Tahoe Rim Trail, or TRT, officially opened in 2001. It winds through the Sierra Nevada and Carson mountain ranges of California and Nevada, offering sweeping views of the crystalline-blue lake, the barren summits of the Desolation Wilderness and the river valleys and mountains in between. The trail’s highest point, Relay Peak in Nevada, sits at an elevation of 10,338 feet; the lowest point, at 6,240 feet, is near the Lake Tahoe outlet. 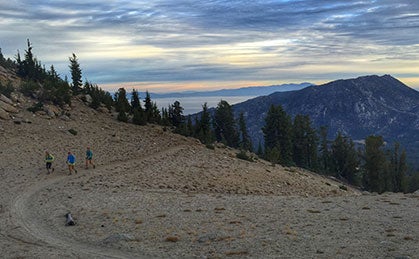 The trail. Photo by Gina Lucrezi

Moehl first became acquainted with the TRT in the summer of 2014. Attending the Alpenglow Mountain Festival in Tahoe City, she ran a few miles on the trail, which passes by the town. Although she thought about completing the whole loop that fall, she couldn’t make it back until June of this year, when she hiked the whole trail over seven days with her boyfriend.

“For me to go on these longer expeditions, I have to have a personal connection to the trail,” Moehl explains. “People often criticize doing something like this as fast as possible, but you get to experience it in two different ways. To see the trail that fast, to move through that much space, is a cool comparison to have with the seven-day hike.”

After, Moehl set her sights on an FKT attempt in September.

Krissy Moehl has long been one of trail ultrarunning’s dominant athletes. She grew up in Bow, Washington, and got her start as a runner with her high-school cross-country team. She continued running at the University of Washington as an 800-meter specialist.

Moehl never considered racing longer distances until, during her senior year of college, she took a job at the Seattle Running Company, a running store where well-known ultrarunners like Scott Jurek, William Emerson and Jeff Dean also worked. Immersed in the elite ultra community, Moehl eventually joined her coworkers for her first trail run—and has been hooked ever since.

But as she planned for her latest record attempt, she came down with a bad stomach virus that called the whole endeavor into question.

“I could only run one week in September,” Moehl recalls. “I ran more miles in the past two days [on the TRT] than I did the whole month of September.” 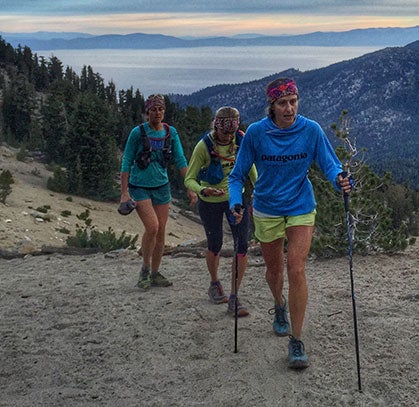 The team, right to left: Moehl, Darcy Piceu and Monica Ochs. Photo by Gina Lucrezi (who was also pacing)

With the sickness cutting into her training, Moehl was nervous about attempting the FKT, but supportive friends and sponsors encouraged her to go for it, she says. Her main goal was to complete the run in under 48 hours.

From the beginning, Moehl had an impressive support team: two four-person crews, plus friends and pacers who joined her on the trail.

“I’m such a spreadsheet, organizing, details person, but what was really helpful was my crew,” she says. “I downloaded my brain to them, and they just rocked it. I didn’t have to worry about anything—they fed me, they figured out food and the girls even made sure all of my clothes matched. All I had to do was run.”

The most challenging part of the route for Moehl was climbing up Relay Peak, the highest point on the course, a little over 100 miles into the attempt. For the first time, the altitude started to get to her—but her crew pulled her through.

“I had six girlfriends pacing me at that point,” says Moehl. “I felt like I couldn’t move. I was at my lowest point, but they were so charged—everybody knew that I was going to rally but me. And when I got to the pass, the rest of my crew was there, too. It was probably the worst place and the best place to have a low, because they just wouldn’t have it. They were amazing.”

She pressed on, and about 40 miles later, with roughly a marathon to go, time became the biggest stressor for Moehl. She didn’t think she was moving fast enough to beat Monforte’s 49:17 FKT, let alone make her 48-hour goal, despite the positive “you got this” encouragements from pacers.

Then, Moehl pushed up and over the final pass, and was met with a beautiful view of Lake Tahoe, as dazzlingly blue as ever. It was the perfect way to recharge. 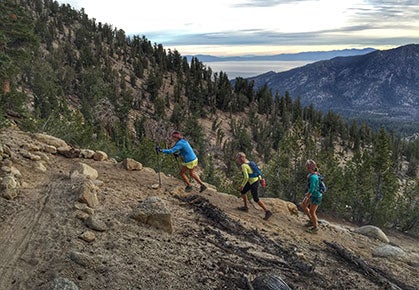 “It’s just mind boggling to see that lake and realize that you’ve just gone around the whole thing,” Moehl says. “Three girlfriends were pacing me at the time, and we all stopped to pee at the same time and were squatting on the edge of the trail just looking out over the lake … It was definitely a highlight. Then it was all downhill.”

In the final stretch, Moehl kicked it into high gear.

“I ran the last miles so fast—a couple of them were under a six-minute pace,” Moehl says. “You’re out there for two days, and it came down to that last marathon. They pushed me so hard, and it was a pretty cool way to finish up.”

After 47 hours 29 minutes on the trail, Moehl was back at Big Meadows. Excited, relieved, exhausted and surrounded by her close friends, crewmates and parents—they joined her at the start and the finish of the trek—Moehl finally sat down to let it all settle in.

“You’re kind of in a numbed space after something like that,” she says. “I sat in a chair for, like, four hours after, chit-chatting and listening to the crew’s stories. I ran 170 miles around, but they must have driven twice that, plus. The joke was that they were all going to go home with great abs because they laughed so much over the whole thing.”

[Correction: In a previous version of this article, we incorrectly wrote that Moehl had the third fastest overall finish on the Tahoe Rim Trail. In fact, Tim Twietmeyer holds the third fastest time. Tom Flahavan of Sacremento, California, set the second fastest time when he finished the loop in 45:34 on August 4, 2012. Flahavan’s an unpublicized run bested Twietmeyer’s time, then the second fastest, by about 24 minutes. Moehl’s time is the fourth fastest overall.]