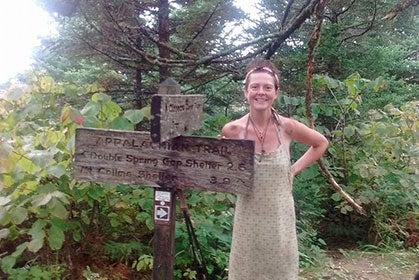 There is another new speed record on the Appalachian Trail (AT). Last Thursday, September 24, Heather “Anish” Anderson, of Washington State, completed the roughly 2,180-mile trail from Maine to Georgia in 54 days 7 hours 48 minutes. (Anderson left the AT’s northern terminus August 1.)

This summer, Scott Jurek made headlines for covering the AT in just over 46 days, fully supported, setting a new overall record by about three hours. Anderson, a 34-year-old personal trainer, accomplished her feat unsupported: no van, no crew, no help, period. Anderson’s time was 4 days 1 hour 52 minutes faster than the previous unsupported (or self-supported) record, set in 2013 by Matt Kirk, according to the Fastest Known Time website

“I enjoy the additional challenge of knowing I’m responsible for myself and solving the problems on the fly,” says Anderson, who also owns the unsupported speed record on the Pacific Crest Trail, set in 2013.

Lacking a crew doesn’t mean Anderson carried every morsel of food and piece of gear on her back from start to finish. Like many thru-hikers, she addressed packages full of food and supplies to herself, then mailed them to (she estimates) 15 businesses along the way. At various road crossings, she would leave the trail, walk into town and pick them up.

“There are restaurants, hotels, outfitters, all kinds of random businesses that let hikers do that,” she says, noting thousands of people hike portions of the AT each year, most without a support crew. “Some charge a small fee, but some hold packages for free.”

One of the biggest challenges of going unsupported, Anderson says, was dealing with business hours.

“Sometimes a place is open 9 to 5 and I can’t get there until 6, or if you get in at 10 you have to hang out overnight to pick up your package,” she says. “I had to rearrange my schedule a few times for that.”

Why Do So Many Thru-Hikers Become Trail Runners?