Fred Brooks, 62, an admired Sacramento runner, was driving home after finishing first in his age group 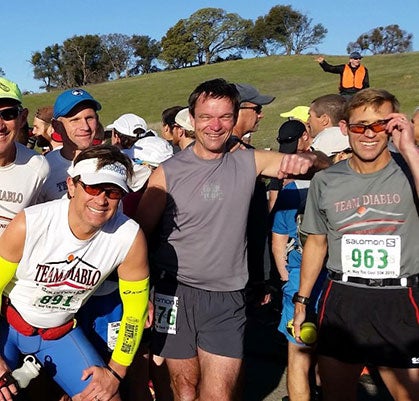 Fred Brooks, center, with members of his running group, Team Diablo. Brooks was an admired figure in the close-knit group. Photo courtesy of Team Diablo

The trail-running community mourns the loss of a longtime friend and accomplished competitor, Fredrick Brooks, 62, of Sacramento, this week.

Brooks completed the difficult Wasatch Front 100-miler on Saturday morning in 28 hours 35 minutes, the fastest time recorded this year in the 60-to-64 age group. The next day, en route from Utah, where the race was held, to his home in California, he was involved in a fatal automobile accident on Interstate 80.

According to newspaper accounts, Brooks was driving westbound behind a semi truck in the slow lane, heading over Emigrant Pass in north-central Nevada. Brooks’s sedan crashed into the rear of the truck. Brooks, who was apparently not wearing a seat belt, died on the scene of the accident around 12:15 p.m. on Sunday. (The truck driver was uninjured.)

Brooks is survived by his son, Ben, 12, and Ben’s mother, Ally Condon.

Brooks was born January 10, 1953. He spent his childhood in Ontario, where he attended Fenelon Falls Secondary School. Later, Brooks, who had an aptitude and love for physics and chemistry, attended Fleming College in Peterborough, Ontario, from 1974 to 1979. There, he studied electro-mechanical engineering and received the Mathews Conveyor Award for the highest overall grade-point average.

On his LinkedIn page, Brooks listed his interests as controls and automation, fitness, skiing, photography, graphics and trail- and ultrarunning.

Brooks, an esteemed runner, led a vibrant, running-filled life. In preparation for his 2015 Wasatch adventure, he ran classic races such as the Way Too Cool 50K, American River 50-miler, Santa Barbara 100K and the Diablo Challenge 50K.  According to his UltraSignup page, Brooks had run over 50 ultramarathons, several of which were 100 miles in length.

Fellow ultrarunner John Trent, race director of Silver State 50/50 and president of the Western States Endurance Run Foundation, recalls Brooks fondly. “The last time I saw Fred was in April, at around mile 20 or so of the American River 50-miler,” Trent says. “We chatted briefly about what a nice morning it was. I told him I was training for the San Diego 100; he said he had Wasatch in his sights.”

Later, Trent looked up Brooks’s race results on UltraSignup. “It looked like he had spent his entire summer building up to Wasatch,” Trent says. “But that was the type of runner he was—he always struck me as being prepared, always very methodical in his approach. He wasn’t the type to waste any races … He truly was a great competitor.”

Despite his methodical, competitive nature, Brooks was a guy who did not take himself too seriously, says another Bay Area runner, Mike Palmer. Brooks liked to laugh and joke around. “People enjoyed being around him, I think, because of his joviality,” recollects Palmer.

Brooks was a member of Team Diablo, a group of ultrarunners from the East Bay, the area east of San Francisco that stretches roughly to the sun-scorched slopes of the team’s namesake Mount Diablo. Jeff Reifer, a fellow trail runner and teammate, described Brooks as “fearless, crazy fun, a bit of a clown on the trail and tough as rocks … and I mean tough!” Reifer recalls that when other Team Diablo members were looking for reasons to drop out of a hard run, Brooks was “always there, pushing and coaxing us to ‘Go harder.'”

That tough-as-nails mentality was on display in 2001, when Brooks attempted the Barkley Marathons, a five-loop, 100-mile race over brambly Tennessee hills that boasts fewer than 10 finishers in its multi-decade history.

“When Freddy was the only guy crazy enough to sign up for the 2001 Barkley 100, I thought for sure he had lost his marbles,” says Reifer. “He came back from that race having completed two grueling loops and looking like he’d gotten in a fight with a mountain lion. He just smiled and said, ‘Yeah, I’ll do it again!'”

Reifer laments that he’ll no longer be able to share the East Bay trails with Brooks. “I’m sure he’ll be looking over us, throwing a good bonk our way, just to make sure we don’t get soft.”

A family friend has established a fund for Brooks’s son, Ben, on gofundme.com, under “Benjamin C. Brooks.”