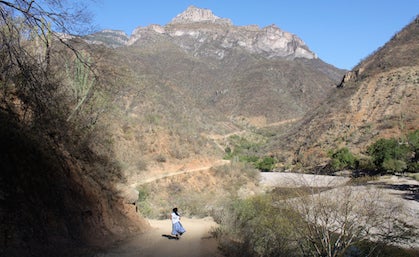 A Tarahumara runner in the 2012 Ultra Caballo Blanco. Photo by Eli Duke/Creative Commons 2.0

Last week, hundreds of runners arrived from all over the world to the town of Urique in northern Mexico to run a 50-mile footrace through the surrounding canyons. They gathered to celebrate peace and the running tradition of the indigenous Tarahumara, or Raramuri, “running people” made famous by Christopher McDougall’s 2009 bestseller, Born to Run. Instead of peace, though, the runners stumbled upon an unexpected surge in drug-related violence.

Founded by the late Micah True, who was known as “Caballo Blanco,” the Ultra Caballo Blanco (originally the Copper Canyon Ultramarathon) has carried on peacefully for the past 12 years.

However, just three days before the 2015 race was supposed to begin, according to an article in El Heraldo de Chihuahua, two police officers of the Batopilas Municipality were allegedly seized by a group of heavily armed men and executed. Their bodies were found on Thursday night, approximately 20 kilometers away from Urique. The commander of the Municipal Police, Ramón Sáenz, was also kidnapped. His whereabouts remain unknown.

Runners reported hearing gunfire around Urique all weekend long. According to race co-director Josue Stephens, the Mexican military arrived on Saturday to help offer protection for runners along a modified racecourse. But, at 4 p.m. on Saturday, Stephens and his fellow race organizers officially called off the race out of concern for the runners’ safety. On Sunday, most runners evacuated the region.

With the support of local government, a handful of runners—primarily Mexican nationals, Urique locals and Tarahumara runners—remained and ran a modified course on Sunday. Some local media reported on the unsanctioned event, naming Ranulf Sánchez as the winner of the race in a time of 5 hours 46 minutes. With no mention of the drug violence or the race organizers’ official decision to cancel the race, these reports have led to some confusion over the events of the weekend.

Investigation is still underway. Stay tuned for updates as the story evolves.